As noted, with the Paris Climate Conference aka COP21 coming up, it's been a very busy week in water. Let's get to the links:

Pingos, or huge mounds, off Siberia may presage a huge release of the dangerous super-greenhouse gas methane into the atmosphere.

Some worry civilization may not survive upcoming water wars caused by climate change. Many are attributing the Syrian civil war and refugee crisis to unprecedented drought conditions from 2006-2010 that forced many rural subsistence farmers into overcrowded cities. At a minimum, water policy analysis is going to be a growth industry in the coming years and decades.

Nearly two billion people in the northern hemisphere rely on declining melting snowpack as a crucial source of water.

Sea level rise is attributed in part to runoff from human over-depletion of aquifers. Some are experimenting with flooding the farmland above aquifers in wintertime to see if they can replenish the aquifers without damaging crops or affecting drinking water. Though groundwater is not as renewable as people once thought.

Egypt's Nile River Delta, once the breadbasket of the Mediterranean,  is sinking into the sea.

Over 800 trillion microbeads of plastic enter U.S. wastewater daily. The city of Oakland, CA, is suing Monsanto for damages to help in mitigating PCBs, chemical pollutants, in storm drain runoff to San Francisco Bay. Researchers have developed a way to break down pharmaceuticals into harmless compounds so they don't contaminate drinking water.

Scientists are continually refining the processes for generating clean, inexpensive fuel from water. Some are focused on so-called "dragon water", super-heated water from beneath the earth's surface. There are six quintillion gallons of water hiding in the Earth's crust.

In case you didn't know, bottled water is extremely wasteful.

New desalination systems are constantly being developed and refined. MIT engineers used an electrolytic shockwave to get the salt out of saltwater that is efficient and inexpensive. Others are using nanoparticles and ultraviolet light to extract man-made pollutants from soil and water. Drinkwell is an organization that supplies inexpensive filtration systems to poor communities.

Saudi Arabia insists that its nuclear power is primarily for the purpose of developing desalination processes.

As many as 139 countries may have the ability to get all their power from renewable resources by 2050.

Here's a picture of tidal channels flowing between small island cays in the Bahamas taken by an astronaut aboard the International Space Station. Full disclosure: Several years ago on a scuba diving trip to Exuma, we dove one of these channels. The boat let us out on the upstream side of the channel and we swam with (or were carried by) the brisk currents through the cut where the boat gathered us up and took us back to the start. We did this about 6 or 7 times. It was like an exciting amusement park ride—but with sharks and rays and dolphins! 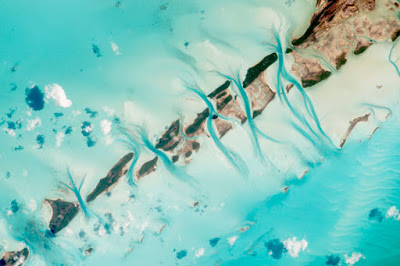 P.S. As usual, the wingnutzen are up in arms about climate change.
~