In the spirit of the new year, I'm going to try something new here at WoW. Robert Detman, writer, blogger, and long-time on-line friend of WoW, has published a new novel: IMPOSSIBLE LIVES OF BASHER THOMAS. 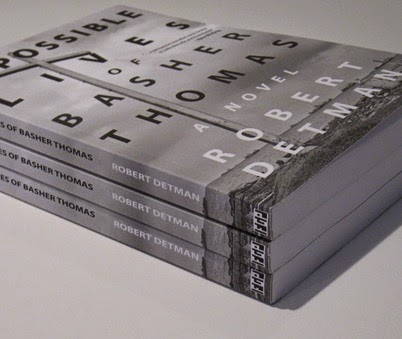 
"Documentary filmmaker Harry Ogletree lives in the shadow of his friend Basher Thomas's fame as an internationally renowned photojournalist, but when Basher disappears in the jungles of Guatemala, his life transforms from a mystery into an enigma. Two decades on, sifting through an archive of Basher's effects, Harry will undertake a dark pilgrimage, from Middle East war zones to third world favelas, to create a documentary about Basher's life. Confronting the malleability of memory and the inescapable desires of his past, Harry will ultimately arrive at the site of Basher's death. This masterful and evocative exploration of the IMPOSSIBLE LIVES OF BASHER THOMAS reflects our willingness to reveal truths about ourselves as we search for elusive answers."

It is available from Figureground Press and, of course, other commercial outlets.


"Detman pulls together various forms and styles in an ambitious novel composed of transcripts, letters, and footnotes, told in sharp prose. On August 17, 1982, renowned photojournalist Nathan “Basher” Thomas is fatally shot. Decades later, Harry Ogletree, one of Basher’s closest friends, decides to write a screenplay about the murder. Harry visits Basher’s mother to speak with her about the project and collect a box of Basher’s personal effects. The contents of the box spur recollections of a road trip across the Mexican Baja peninsula, arguments in Michigan, and drug abuse in Paris, and also provide insight into Basher’s death. Harry follows these clues to Rancho Nacon, a mysterious Guatemalan jungle villa with an enigmatic caretaker. On his pilgrimage, Harry hopes the people he questions and memories he uncovers will help to deconstruct the mystery of Basher Thomas. Because of the book’s unconventional structure, the narrative is fragmented. Although the disjointedness complements Harry’s fractured search for information and meaning, the story’s momentum is often slowed by passages that are needed to prevent confusion and explain earlier elements of the novel. The best scenes focus on the intimate details and relationships between the characters. Detman’s stylistic choices succeed in the moments when Harry’s memories and Basher’s documents blur into the present, layering various methods of storytelling to create a fresh and intriguing work."

Detman, proprietor of the blog The Literary., agreed to sit for an interview, and I am pleased to bring it to you in its entirety in the next several installments.

He sent me a copy, but I haven't been back to Ohio since before Thanksgiving.
~

It's well worth your time.

I'll get back there someday. Or else the landlord (C.I.L. the Landlord!) will toss all my junk out. Like my good computer, my two good suits, etc. etc.

Anyways, away with depressing thoughts!

Here's the newest addition to my blogger-roll:

(N.B., he is writing about a depressing thing: the corporate assault on education.)
~