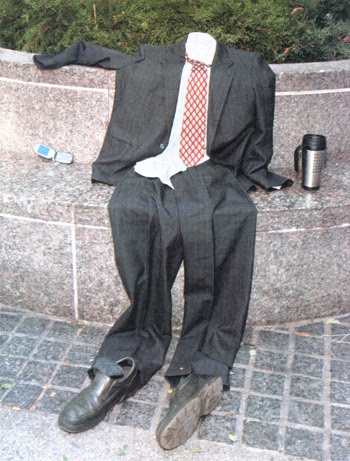 It seems I can never get a break. For the last several years, I've been toying with the idea of starting up an insurance company: a Rapture Insurance company. You know, collect premiums from millennialist Christians, promise to take care of their plants and pets and property and Left-Behind family members with the percentage of same I haven't skimmed off in salary, benefits, and, you know, general overhead and taken, as is my God-given right as a capitalist, as profit.

Well, now it seems I'm too late. According to these folks, Judgment Day is this Saturday, May 21, 2011. After a period of torment, the world will end five months later, October 21st. Too late to get anything done. You don't move, you lose. Opportunity only knocks once. Or does it?

Okay, so here's what we do: let's all take some old clothes, configure them like the pic above—like someone's been taken to heaven without dying in them—and leave them lying around town, especially near some of these fundamentalist churches on Sunday morning so when they show up for church they're like 'Uh-oh!'

NB: None of these folks will ever vote for a Democrat. This is a big part of the unreconstructed Republican base. Believe it.

-----
That's a damn shame, too, because I start training for my first full mary next week. The Atlanta Marathon is October 30. Crap.

And what's more, for those of you keeping score at home, I just got a request for the full manuscript of my novel, EULOGY, this weekend. More's the pity. No need to send it now.

-----
In case you missed it, here's some items that caught my attention while the blogger was down (which I don't think BDR scooped):

Fukushima Daiichi #1 reactor is in full-blown meltdown. [Maybe those guys were right!]

On that score, journo Matt Taibi lays out a pretty interesting case against Goldman Sachs for financial crimes.

The Koch brothers are the latest left-populist bogeymen, at least according to the other Greenwald, Robert. Poster boys for Citizens United.

BTW: If you're at all inclined, this guy keeps a fairly tidy and readable blog about legal stuff in the headlines.

-----
James Joyner has joined with those who see no difference between: (a) pre-emptively invading a country because their dictator double-crossed us and they have tons of publicly-held oil which we want to keep the Chi-coms from getting their red hands on and (b) providing airborne military assistance to a groundswell populist revolt against a double-crossing dictator who is likewise sitting on a shitload of oil.

-----
And now for something completely different: This may be the coolest site on the internets. Frankly, it's what it's all about. It's public. And it's free. Your national jukebox.

-----
In response to a comment by Randal Graves, one of my two favorite librarian/bloggers: yes, we did seem to move in completely different musical circles. Your place is an education for me. But I'll bet you, in a Venn diagrammatical sort of way, we intersect somewhere around here:

And don't forget about the day(s) after
http://www.dangerousminds.net/comments/post_rapture_looting_event_page_on_facebook/

Have you caught Doonesbury this week? Zonker's pre-Rapture neighbor gave him his sweet Mercedes.

Of course, when the great Tribulation starts next week (as it almost always does when the kids here in ATL get out of school), we'll see who's laughing then, won't we?

Play the local card, you're just as bad as a well-coiffed newscaster!

Dammit, that's a fine idea. I just wish I knew where the lady with not one, but two, May 21st rapture bumper stickers I witnessed the other day goes to snake handle.

Re: Eulogy. Perhaps you'll get lucky and all the crap ass lit agents will get sucked into Elysium.

We jest, but this whole phenomenon is a function of a deep, deep-seated ignorance. It's sad, really. No amount of education or enlightenment is going to awaken them. And their kids: they're blinkering them too.

These people, when they vote, their vote counts just as much as yours or mine. And they're so adamant and insistent on the rightness of their views. Frankly, it discouraging.

What else is there to do but laugh at 'em? Hating them does no good. Hate is for the true believers.