I shall be out of pocket for a couple weeks visiting Wisdomie, my eldest, a Scuba Instructor, in Hawai'i—parental duty, don'cha know. Don't expect posting here for awhile. But if you have a blog and your Stat Counter drops a pin somewhere out in the middle of the Pacific at some bizarre hour in your home time zone, don't get too excited. It's probably just little old me checking in for a quick read during surface intervals or when there's nada surf. No big whoop!

Who knows, maybe I'll get lucky and run into Todd Rundgren on the beach in Kaua'i. Something? Anything? Nazz Nazz.

Email ThisBlogThis!Share to TwitterShare to FacebookShare to Pinterest
Labels: Hiatus

Who Are You Calling an Idiom?

This one gets me all the time: Ever hear the expression "You can't beat a dead horse."? That, I believe, is a misconstrual of the phrase "You can't flog a dead horse." Now, "flog" has a couple meanings: it can indeed mean 'to whip or beat', so that the phrase means something like 'there's no sense in engaging in useless labor.' And that's its predominant use nowadays. But "flog" also means 'to sell or hawk', especially illegally. So the expression "You can't flog a dead horse" is actually an idiomatic expression of a British common law maxim. It's against the law to sell a horse that's already dead—unless, of course, it's for the purposes of glue or dog food or, lately, Ikea's Swedish meatballs. As with U.S. "lemon" laws w/r/t automobiles. Funny how language mutates.

Here's another: "He's the spitting image of his father." That's a bastardization of the phrase "spirit and image."

Email ThisBlogThis!Share to TwitterShare to FacebookShare to Pinterest
Labels: Idiom 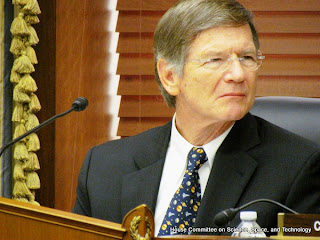 Lysenkoism was the name given to centralized political control over the sciences of genetics and agronomy in the old Soviet Union from the late 1920s to 1964. Named after Trofim Lysenko, a minister of agriculture under Lenin and Stalin, the term "Lysenkoism is used metaphorically to describe the manipulation or distortion of the scientific process as a way to reach a predetermined conclusion as dictated by an ideological bias, often related to social or political objectives."

If you think Stalinism died with the passing of the Soviet Union, you've got another think coming.


"In March, at the urging of U.S. Senator Tom Coburn (R-OK), Congress halted funding for political science—“except for” research that the agency's director certifies as “promoting national security or the economic interests of the United States.” This extra test might not stop with political science. Representative Bill Posey (R-FL), in an NSF oversight hearing on 17 April, asked John Holdren, President Obama's science adviser, why Coburn's two criteria were not “a good and proper filter” to apply to all NSF grants..."


"over the course of two contentious hearings, the new chairman of the House of Representatives Committee on Science, Space, and Technology floated the idea of having every NSF grant application include a statement of how the research, if funded, "would directly benefit the American people." Representative Lamar Smith (R-TX) said that he was not trying to "micromanage" the $7 billion agency but that NSF needs to do a better job of deciding what to fund given the low success rates for grant applicants and a shrinking federal budget."

And now, "[t]he new chair of the House of Representatives science committee has drafted a bill that, in effect, would alter peer review at the National Science Foundation by embracing a set of criteria chosen by Congress."

Lamar Smith, the Republican head of the House Committee on Science, Space, and Technology, seems to believe that the NSF needs a political director to oversee its grant-funding process rather than its current peer review process which relies on the informed opinions of knowledgable and qualified experts in the specific areas under review.

This is, precisely, thought control. Nothing less.

Think through the implications of such a political position: Scientific research and discovery should only be allowed if it serves or pursues the interests of the State (or, better, the party in power). Truth only counts if it's consistent with prevailing ideology. Ignorance is preferable to inconvenient truths.

The denial of reality does not make it go away.

[Wait, didn't we see this ideological position take in on the chin in the last election cycle with the Republicans' rejection of analytic polls that critiqued the methodological assumptions of their own preferred polls and didn't match their victory narrative? Oh, and hey, didn't I ask this same question in a post last month about the economics of austerity?]

How does one arrive at such a know-nothing position. Turns out Rep. Lamar Smith is a Christian Scientist.


"Christian Scientists [] subscribe to a radical form of philosophical idealism, believing that spiritual reality is the only reality and that the material world is an illusion. This includes the view that sickness and death are illusions caused by mistaken beliefs, and that the sick should be treated by a special form of prayer intended to correct those beliefs, rather than by medicine. Between the 1880s and 1990s the avoidance of medical care and vaccination led to the deaths of a number of adherents and their children; several parents and others were prosecuted for manslaughter or neglect, and in a few cases convicted."

These are the anti-vaccine activists, or at least their ideological mother ship. These are the people who choose, or at least chose, to pray for their sick kids rather than allow medical treatment. This may not be fully explanatory, but it is insightful.

Notwithstanding the foregoing, the censorious urge is clearly strong with Coburn, Posey, Smith, and their party.

If Lamar Smith is such an anti-science, anti-reality, know-nothing, political ideologue, how did he get to be the head of the House committee on science? Doesn't the question imply its own answer?

But then arise the contradictions for conservatives, libertarians, and Republicans: How is this "smaller government"? How is this getting the government out of the way? How is this freedom? It seems to be in direct opposition to their professed ideals and, moreover, their proclaimed reasons for people to vote for them.