Jekyll Island, GA, is one of those places you can never forget. A barrier island of the coast of Brunswick, its inland salt marsh is a unique ecosystem of subtle beauty and calm. Its live oak trees dripping with beards of epiphyte Spanish moss are hauntingly lovely. There are bike trails and beaches and a historical district. We saw kingfishers and osprey and herons and cranes and all manner of sea birds. There were alligators, too, though they were scarce because it was too cool for them last week. But that is not what makes Jekyll so unique.

On the north end of the island you will find Driftwood Beach. There is not really any driftwood there, but it is a bone beach—a maritime forest being reclaimed by the salt sea. I can think of no other place in the world quite like it. Hundreds of oak trees (mostly) denuded of their leaves and bark and moss lie in the sand and sea. There is a starkness, a sadness, to the beauty of this place. It's almost impossible to capture the feeling of this place in words—whether at sunny low tide or frothy high tide. It sticks with you.

And now, just across the St. Simons Sound, you can see the hull of the Golden Ray, a massive cargo carrier that capsized there in 2019. There were thousands of automobiles inside the ship when it tumped over. It has an even larger crane arcing over the ship which is being used to slice up the husk piece by piece.

Enough with words. I will let the pictures below tell the story. If you click a pic, a slide show will pop up.

Here’s a sad tale—but an interesting one. A mystery.

Every morning for the past couple of weeks I’ve been woken up by the sound of a small bird banging against my bedroom window. It flies into the window, smashes into the glass with its beak, then settles back onto the ledge, and tries again. It happens over and over and over again. Dozens of times in a row.

At first, I figured it was probably just attacking a mirror image of itself it had glanced in the window, an alpha male attempting to frighten off another male bird that was encroaching its territory. But it kept happening time after time, day after day.

I began to wonder if it was something more. What if our house was somehow blocking its natural migratory flyway? Or it’s geomagnetic navigational system was somehow out of kilter? None of this I can prove. Besides, this is the first time anything like this has happened, and we've lived here for 20 years.

Then I remembered that a couple years ago, a bird made its nest in a coiled hose stacked up in our garage—which is directly below that window and which we now keep closed mostly. That gave me another thesis: this bird was trying to return to the place of its 🐣 hatching. Some instinct was drawing it back to its place of origin to nest, relentlessly. Birds are like that, I hear.

But that theory was scotched this morning. The bird woke me up again today. I decided to take a picture. And when I went out to get the papers, it was still there, and I was able to identify it. It’s a bluebird! (You can make it out in the last photo below) The bird that had nested in our garage, however, had been a sparrow. So that theory was out.

So, once again I'm at a loss. I do not understand what instinct or affect is compelling this particular bluebird to flutter its wings and smash its beak into my window over and over again morning after morning. I cannot put myself in its place anymore than it can break through my bedroom window. I simply can never know what it’s like to be a bird, to be this bird.

Nor is there anything I can do to stop it and perhaps prevent it from hurting itself. It's kind of sad.

Now, some literary types might suggest that it’s some sort of metaphor: maybe it has something to do with the persistence of the natural world no matter how much we do to insulate ourselves from it. Or, it's symbolic: the bluebird of happiness(!) is trying to batter its way into my life, but can’t because of whatever personal—emotional or mental—barriers I’ve erected over the years. Or, there's always the theological spin: my resistance to the inbreaking of the Holy Spirit—though I guess the bird would need to be a dove in that case.

None of that really cuts it. I guess I will just have to learn to accept the mystery of it, the pathos. The best I can do is sympathize with this bird's futile plight and admire its stubborn persistence. I cannot fully put myself in its place, share its compulsion. Cannot fully empathize. It is completely alien to me. It is an OTHER. It is a being that has its own instincts and appetites and affects. Its own mind, its own soul, if you will. A truly mysterious creature, one whose beauty I can appreciate and whose behavior I can observe, but one I can never truly know. 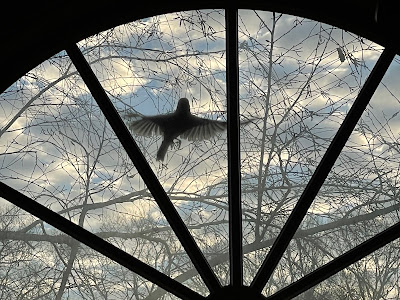 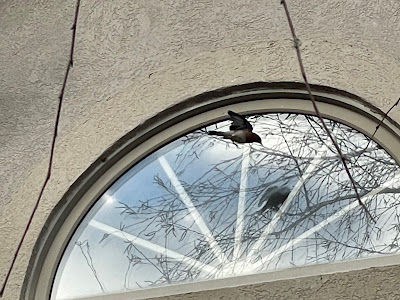 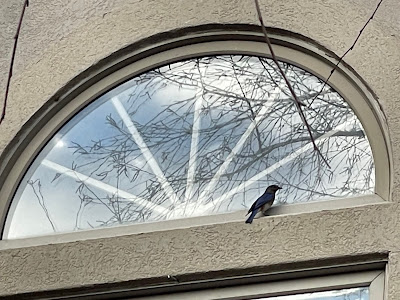