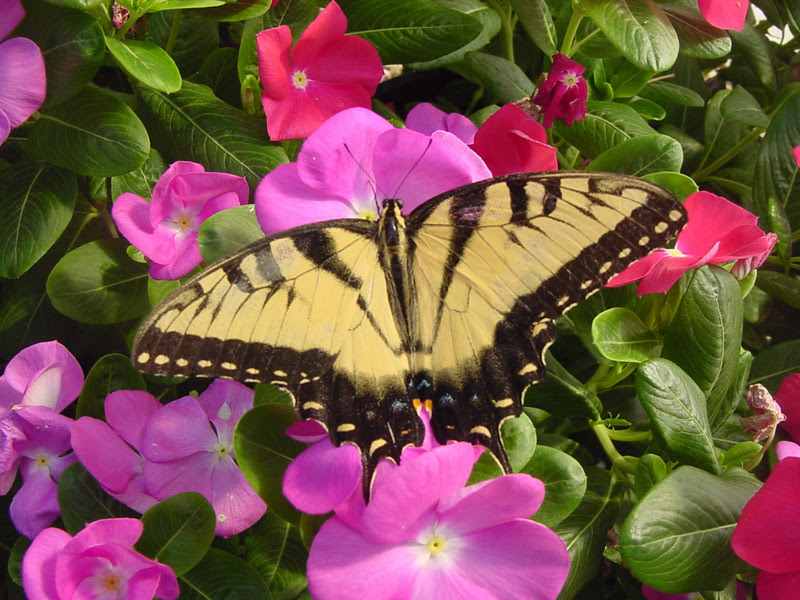 The houses are haunted
By white night-gowns.
None are green,
Or purple with green rings,
Or green with yellow rings,
Or yellow with blue rings.
None of them are strange,
With socks of lace
And beaded ceintures.
People are not going
To dream of baboons and periwinkles.
Only, here and there, an old sailor,
Drunk and asleep in his boots,
Catches Tigers
In red weather.

(from "Harmonium," 1923)
I'm not a Stevens scholar or a poet, but I wanted to take a run at this poem. It illustrates a point from my last post on the novel.

I'll start with the premise that it is the persona of the poem who is disillusioned. And he (let's assume it's a 'he', despite the night-gown connotations) is disillusioned with himself, not the villagers. He is disillusioned by the sameness and conformity of the neighborhood/community in which he finds himself: the houses, the night-gowns. His life is mundane: no color, no exoticism, no adornment. No dreams.

Query: Why does the poet use the loaded term 'periwinkle'? And which meaning does he intend? A periwinkle can be an exotic color, a lovely, delicate flower of that color, or 'a shore-dwelling mollusk'—all of which fit. The color fits the theme of white gowns that aren't either green, or purple, or yellow with various designs upon them. The flower is dreamily exotic, especially in the hands of a baboon, connoting the lack of imagination of the people. The shore-dwelling mollusk contrasts with the drunken sailor, and seems more emblematic of the persona's disillusionment with himself and his life. Similarly, its shell echoes the beads of the sashes the unimaginative (apish?) people don't wear. Let's go with all three.

Query: So, in this allusion, is the old sailor dreaming about catching Tigers in a treacherous morning, or is he catching Tigers in the delightful, promising evening of his dreams? And are we talking about the big cats or the butterflies here? That one is up for grabs, too (and we can't ask Stevens); but it is clear that the persona of the poem is wistful of the life of the vivid imagination (embodied by the drunken sailor who doesn't don a dull night-gown, but sleeps drunk and in his boots, and is perhaps, an alter ego, a life not lived, or merely a romantic figure)—the danger (Tiger, morning) and the beauty (Swallowtail, night)—and disillusioned with the safe life of houses haunted by white night-gowns as he readies for his own sober, dreamless sleep of ugly conformity. And perhaps, as it's getting late in the day, his death.

By Shroder's definition (in the previous post), there's a whole novel in this lovely, breath-taking, little poem.
Posted by Jim H. at 17:17