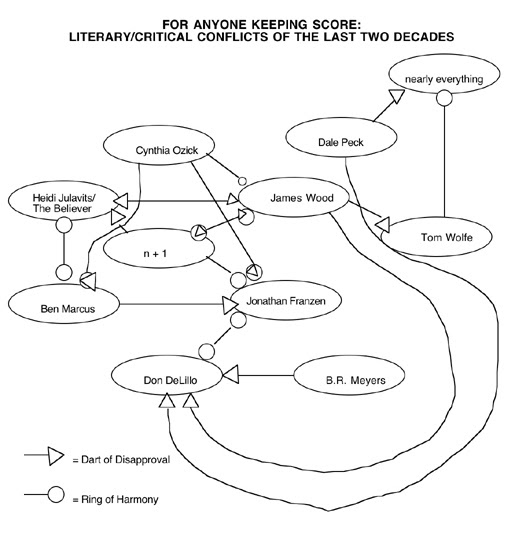 "Truth, Convention, Realism": This is the title of the last chapter of How Fiction Works by James Wood. Here, he takes on the argument that "realism" in fiction is simply another genre one of whose chief proponents, he says, is the novelist Rick Moody.

Wood, too, is impatient with what he calls "commercial realism"—"intelligent, stable, transparent story-telling," the sort of conventional writing that gives us sufficient details to convince us that what is going on in the novel is really happening. Indeed, "[c]ommercial realism has cornered the market, has become the most powerful brand in fiction. We must expect that this brand will be economically reproduced, over and over again...when a style decomposes, flattens itself down into a genre, then indeed it does become a set of mannerisms and often pretty lifeless techniques." (p. 175) It does not give us "the irreducible, the superfluous, the margin of gratuity, the element in a style which cannot be easily reproduced and reduced." The conventionally realistic novel can be translated into film with little or no loss of content. Styles are interchangeable. Voice is absent.

Wood takes a quick detour from the thread of this argument to quarrel some more with Barthes and Gass. They move from the argument against convention to the charge that "fictive convention can therefore never convey anything real" (p. 176). Wood feels this move is unwarranted. It is never a question of reference—after all, fiction, by definition, has abandoned all claim on reference. Rather, it is what Wood calls "mimetic persuasion": "it is the artist's task to convince us that this could have happened. Internal consistency and plausibility then become more important than referential rectitude And this task will of course involve much fictive artifice and not mere reportage." (p. 179) This, I presume, is a shot at Tom Wolfe's 'billion-footed beast'.

Realism, seen broadly as truthfulness to the way things are, cannot be mere verisimilitude, cannot be mere lifelikeness, or lifesameness, but what I must call lifeness: life on the page, life brought to different life by the highest artistry. And it cannot be a genre; instead, it makes other forms of fiction seem like genres. For realism of this kind—lifeness—is the origin...the writer has to act as if the available novelistic methods are continually about to turn into mere convention and so has to try to outwit that inevitable ageing. (pp. 186-87)

The novelist is forever seeking after new forms to capture the substance of life. That, it seems to me, is the novel's vitality. It is also trying to capture or portray something about human life—call it meaning, truth, reality, lifeness, or whatever. My own qualm (as someone with philosophical training) with the use of such words as 'truth' (see also here) and realism in relation to fiction aside, Wood is on to something here. It is the "studiedly irrelevant" detail that works for him, such as Orwell's watching a condemned man walking toward the gallows swerving to avoid a puddle.

There was no logical reason for the condemned man to avoid the puddle. It was pure remembered habit. Life, then, will always contain an inevitable surplus, a margin of the gratuitous, a realm in which there is aways more than we need: more things, more impressions, more memories, more habits, more words, more happiness, more unhappiness. ...the margin of surplus itself feels like life, feels in some curious way like being alive. (pp. 68-69)

Again, the devil is in the details. My own impatience with Wood's effort in this thought-provoking and book has to do with his failure to show how the details, beyond providing a means to understand characters, add up in fiction to make a compelling story. Roughly, stories provide something for us. Whether it is organization, order, form, structure, meaning, closure, WISDOM, or whatever I'm not prepared to say. But neither is he. This is why we keep reading stories and why they keep moving us. Sure, the brush-strokes are nice, the details (essential or superfluous) persuading us of the lifelikeness of the illusion (of the character)—and the raging debate here is whether the critic should focus chiefly on the way in which the illusion is presented (Gass) or on the illusion itself and its congruence with reality perceived or imagined (Wood). But stories wrap up, even Chekhov's; they end. And they begin as well. From our reading of Wood, however, we have no way of understanding how they get from the latter to the former. That is to say, how fiction really works.
Posted by Jim H. at 13:40