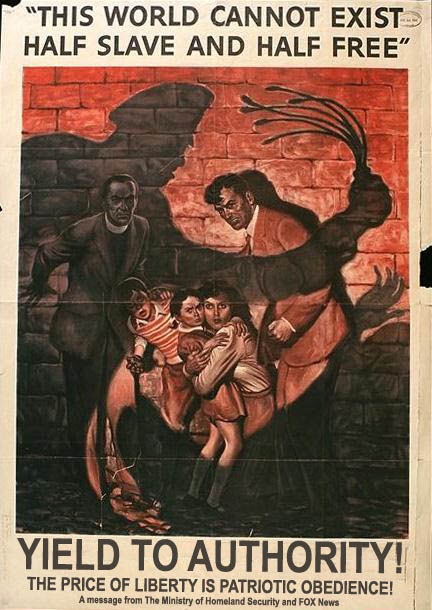 "[He has] no more pressing need than the one to find somebody to whom he can surrender, as quickly as possible, that gift of freedom which he, the unfortunate creature, was born with." Dostoevsky, The Brothers Karamazov

"There is only one possible, productive solution for the relationship of individualized man with the world: his active solidarity with all men and his spontaneous activity, love and work, which unite him again with the world, not by primary ties but as a free and independent individual . . . . However, if the economic, social and political conditions . . . do not offer a basis for the realization of individuality in the sense just mentioned, while at the same time people have lost those ties which gave them security, this lag makes freedom an unbearable burden. It then becomes identical with doubt, with a kind of life which lacks meaning and direction. Powerful tendencies arise to escape from this kind of freedom into submission or some kind of relationship to man and the world which promises relief from uncertainty, even if it deprives the individual of his freedom." (Erich Fromm, Escape from Freedom [N.Y.: Rinehart, 1941], pp. 36-7.

"For Christians there is no other law than the law of freedom, as the New Testament paradoxically puts it. There is no generally valid law which could be expounded to them by others, or even by themselves. Those who surrender freedom surrender their very nature as Christians. Christians stand free, without any protection, before God and before the world, and they alone are wholly responsible for what they do with the gift of freedom." Dietrich Bonhoeffer, "What is a Christian Ethic?"

"They who would give up an essential liberty for temporary security, deserve neither liberty or security." Benjamin Franklin

"When liberty is taken away by force it can be restored by force. When it is relinquished voluntarily by default it can never be recovered." Dorothy Thompson

"Under a government which imprisons any unjustly, the true place for a just man is also a prison." Henry David Thoreau

"So long as the people do not care to exercise their freedom, those who wish to tyrannize will do so; for tyrants are active and ardent, and will devote themselves in the name of any number of gods, religious and otherwise, to put shackles upon sleeping men." Voltaire
Posted by Jim H. at 17:10

Email ThisBlogThis!Share to TwitterShare to FacebookShare to Pinterest
Labels: Freedom