Ur-story: Things To Do in Dublin When You're Dead* 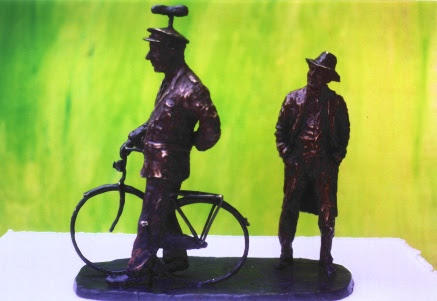 Do you like the television show 'The Office'? (Especially the British version?) What about the Blackadder TV series with Rowan Atkinson and Hugh Laurie? Then, you must love Monty Python. And you may or may not know about The Goon Show, the British radio series starring a young Peter Sellers, Spike Milligan, Harry Secombe, and Michael Bentine. The Goon Show ran throughout the Fifties on British radio. It is still played in many places in syndication. I used to listen to it in college—I think it came on WUNC-FM on Saturday evening's just before A Prairie Home Companion (a different kind of humor altogether). The best way to describe it is surreal, absurdist farce with sound effects. Firesign Theater, if you know them, owes the Goons a great deal. But, they're not from the British Isles and that is not the purpose of this post.

What is it with those wacky Brits and their humor? You find it in Beckett and Sterne and Swift and Douglas Adams. You see it in the movie "Brazil". In particular, you get in spades in the novel The Third Policeman, by Flann O'Brien a/k/a Brian O Nuallain a/k/a Myles na gCopaleen.

This may be one of the funniest novels I've ever read, rights up there with, say, A Confederacy of Dunces or Don Quixote. It's also one of the strangest, and here we venture into originality. In the introduction to the edition I have, the Dalkey Archive paperback [btw: FYI: The Dalkey Archive is also the title of another book by O'Brien!], Denis Donoghue calls on the typology/anatomy of types of prose fiction of Northrop Frye we discussed in an earlier post, calling it "of the Menippean form. ... [It] takes its place in a well-established tradition of fictive, anatomical weirdnesses." (ix-x)

At first glance, the set-up is a rather simple one: an anonymous wooden-legged man conspires with his "lazy and idle-minded" friend and tenant farmer, John Divney, to rob and murder one Phillip Mathers who "carried no less than three thousand pounds with him every time he hobbled to the village to lodge his money." (15) They carry out their plan and mug the man who is carrying a black box presumably full of money. Divney hides the box while the narrator buries Mathers. After an appropriate interval, Divney sends the narrator to fetch the box which he says is hidden in a hole in the floor of the old man's mansion. This is when things get weird:

"Without stopping to light another match I thrust my hand bodily into the opening and just when it should be closing about the box, something happened.

I cannot hope to describe what it was but it had frightened me very much long before I had understood it even slightly. It was some change which came upon me or upon the room, indescribably subtle, yet momentous, ineffable. It was as if the daylight had changed with unnatural suddenness, as if the temperature of the evening had altered greatly in an instant or as if the air had become twice as rare or twice as dense as it had been in the winking of an eye; perhaps all of these and other things happened together for all my senses were bewildered all at once and could give me no explanation. The fingers of my right hand, thrust into the opening in the floor, had closed mechanically, found nothing at all and came up again empty. The box was gone!" (23)

Now, we are in the region of the Ur-story.

Then he has tea with old Mathers, whom he (and we) had presumed dead. Mathers, it turns out, can only reply in the negative to any questions the narrator puts to him. This is clearly Monty Python territory. When asked his own name, the narrator responds: "I have no name." He hews to this tactic throughout the story in the hopes it will keep him from being held accountable for the murder of the old man.

Next, we venture further into a weird bit of metaphysics as Mathers explains that you can tell how long a person will live by determining "the colour of the wind prevailing at his birth. ... the lighter the better." (33)

"'When I was born there was a certain policeman present who had the gift of wind-watching. The gift is getting very rare these days. Just after I was born he went outside and examined the colour of the wind that was blowing across the hill. He had a secret bag with him full of certain materials and bottles and he had tailor's instruments also. He was outside for about ten minutes. When he came in again he had a little gown in his hand and he made my mother put it on me.'

'He made it himself secretly in the backyard, very likely in the cowhouse. It was very thin and slight like the very finest of spider's muslin. You would not see it at all if you held it against the sky but at certain angles of the light you might at times accidentally notice the edge of it. It was the purest and most perfect manifestation of the outside skin of light yellow. This yellow was the colour of my birthwind.'" (33)

(One has to go to Brian Evenson's novel about Mormon weirdness, The Open Curtain (which is not funny), to get a better depiction of magical underwear.)

The recipient gets a new gown from the policeman each year on his birthday and puts it on over the ones from the years before. Each year, with the accumulation of these diaphanous and stretchy gowns, the person's color gets darker until it turns black, and the person dies. The narrator figures these policeman can help him regain his lost black box, and Mathers points him to the local police barracks:

"'There is Sergeant Pluck and another man called MacCruiskeen and there is a third man called Fox that disappeared twenty-five years ago and was never heard of after. The first two are down in the barracks and so far as I know they have been there for hundreds of years. They must be operating on a very rare colour, something that ordinary eyes could not see at all. There is no white wind that I know of. They all have the gift of seeing the winds.'" (35)

The remainder of the book is the narrator's absurd odd-y-sey to recover the black box. (more to follow)

*Generous tears filled Gabriel’s eyes. He had never felt like that himself towards any woman but he knew that such a feeling must be love. The tears gathered more thickly in his eyes and in the partial darkness he imagined he saw the form of a young man standing under a dripping tree. Other forms were near. His soul had approached that region where dwell the vast hosts of the dead. He was conscious of, but could not apprehend, their wayward and flickering existence. His own identity was fading out into a grey impalpable world: the solid world itself which these dead had one time reared and lived in was dissolving and dwindling.*

A perfectly acceptable answer, though not the precise one I had in mind.

I was thinking of "Things" from xVU John Cale's Hobo Sapiens. Give a listen: http://www.youtube.com/watch?v=JmbOCqTmwig&feature=related

This is true - I had packed The Third Policeman to read in England, but the first night there I bought a copy of Ishiguro's *The Unconsoled* and it's love.

Third Policeman next, though.