Speaking of Hate—And How

Ever wonder how, over the past few years, sometimes when you hear some rancid commentator (Coulter, Malkin, Pat Buchanan or Bay) on a cable "news" show (Hannity, Beck, O'Reilly—that's you FOX) or some bloated talk radio host (Limbaugh, Hannity), or you receive a forwarded "urgent" email from one of your too-political friends making some outrageous claims (Obama's the Anti-Christ, liberals want to take away all your guns), or read an editorial in the Wall Street Journal or New York Post or an op-ed in the Washington Post (Will, Krauthammer) or the New York Times (Brooks, Kristol (his job there's done)) saying there's a rumor out there, or some newsmagazine (Commentary>, New Republic, National Review) comes out with an issue deploring such things, or a new book hits the stands (Regnery Press) and even though its premises seem ludicrous on its face (Bernard Goldberg, Jonah Goldberg, Coulter (yet again), Bennett) everyone seems to be talking about it, and then some congressman stands up and vituperatively mouths the same pithy phrases—ever wonder how and why they all seem to hit certain points on the same week?

The tone of these talking points are usually an aggressive mix of sarcasm and resentment and some form of veiled/coded racism or sexism or xenophobia or other hate-filled bigotry. They often contain a toxic mix of truth, truthiness, lies, and bullshit in such measures as to make them indistinguishable. As often as not, they involve claims that can't be easily verified or make false or misleading sensationalistic assertions that are (probably deliberately) ignorant of countervailing proofs: a minute of bunk that takes (or would take, given the time and expense involved) five more to debunk. One favorite tactic of these bloviators is to accuse their enemies of trying to do the same things they've been doing the whole time or to claim they believe one thing while secretly doing its opposite. It's all about attitude, stance, opinion, villification, outrage (faux, usually), and, in a word, ressentiment. They are maddening.

So, where do these talking points originate? How do all these people keep on the same page? Is it the natural flow of ideas and issues? Or, does some gnome sitting in the Empire State Building or some Heritage Foundation hack send out a blast email to all the connected Blackberries with a list of items of the day? Paul Krugman wants to know, too.

According to Krugman, it seems that during the Bush Presidency*, talking points were distributed by the White House, presumably by its political director Karl Rove. One suspect he had some role in their creation, as well. But now that they don't have the White House?

I came across this recently. Here's one likely suspect: Grover Norquist, direct mail fund-raising champ and head of Americans for Tax Reform. Norquist is famous for his requisite Wednesday morning meetings. He's also the source of the quote that he wanted to shrink government "down to the size where we can drown it in the bathtub." You can read more about him here.

Here's another suspect (though I guess they coordinate their agendas) : Rep. Jack Kingston (R-Ga) from the Savannah area. According to his own web site, it seems Mr. Kingston is head of something called the Republican 'Theme Team': "Known as an effective communicator and a conservative voice, Kingston has served as the Chairman of the Theme Team since 1997." This is another right-wing propaganda organ. Their Tuesday Morning Meetings are well-known and de rigeur in certain circles, as well.

Their charter reads as follows:

•  The Theme Team is made up of Members who wish to coordinate a message with Leadership and other groups, including COS, the Wednesday Group, Republican Study, the NRCC, and other Republican Organizations.

•  Ideally, the Theme Team will develop ideas and phrases to be used by all Republicans. Outlets for these themes include one-minute speeches, special orders in coordination with the Communications Advisory Group.

•  One-minutes are written by a variety of speechwriters from the Leader's Office, the Whip Office, Conference, Policy, and other Members' Offices and Committee Staffs .

•  Themes developed by the Theme Team and approved by the Leadership should be communicated to all Members of the Conference through a variety of ways.

•  Themes should be posted in the Republican Cloakroom. The Conference Boarding Pass and other appropriate venues will similarly communicate those themes.

•  The Whip Meeting and the Policy Forums should mention what the Team has developed for that week. And, under special circumstances, the Cloakroom line should be employed to communicate to all Republican offices
what the themes are.

Their use of repetition in forum after forum and media after media only serves to drive home their points:. It doesn't make them true:

"But the most brilliant propagandist technique will yield no success unless one fundamental principle is borne in mind constantly and with unflagging attention. It must confine itself to a few points and repeat them over and over." -- Adolf Hitler, Mein Kampf, p. 184

"The purpose of propaganda is not to provide interesting distraction for blasé young gentlemen, but to convince… the masses. But the masses are slow moving, and they always require a certain time before they are ready even to notice a thing, and only after the simplest ideas are repeated thousands of times will the masses finally remember them." -- Adolf Hitler, Mein Kampf, p. 185
Quotes from Mein Kampf, trans. by Ralph Manheim, (Cambridge, Mass.: The Riverside Press, 1962).

Remember, Pres.* G.W. Bush once gave his own version of his job description as follows:

"See, in my line of work you got to keep repeating things over and over and over again for the truth to sink in, to kind of catapult the propaganda." 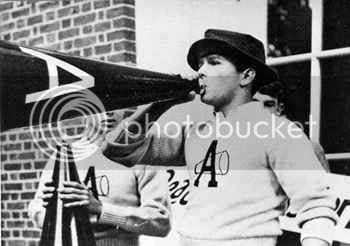 Which raises the question: Without the Dauphin there to "kind of catapult the propaganda," one wonders how they'll be able to sustain. The usual method is the creation of a bogeyman, an "Emanuel Goldstein", an object around which to organize their periodical 'two minutes' hates'.

Yeah, these people are the true fuckers. Up against the wall, the lot of them.

Happiest days of their lives.