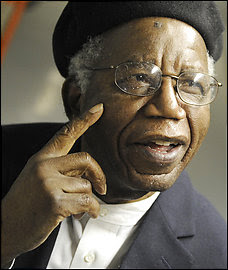 Several months back, I looked at Saul Bellow's Henderson the Rain King (1957) about an American's frolic in Africa. I called the piece 'Going Native'. Around the same time Bellow's book came out, Chinua Achebe published his Things Fall Apart. It is like the mirror image, or negative, of Bellow's piece.

Where Henderson seeks some sort of authenticity running amok with the 'natives' and the lions deep in the jungle, Achebe's protagonist sees his life fall apart due, in part, to the arrival of Western missionaries and colonial administrators.

Briefly, Okonkwo, Achebe's protagonist, has risen of his own prowess to a respectable position within his clan and village of the Ibo tribe on the lower Niger River. Like Henderson, he attains prominence by performing a ritual feat of strength. He has several wives and many children. His yam crops are prolific—a sign of his wealth. The time is roughly the late 19th to early 20th Century. There do not seem to be any chiefs in the social order; social polity is decided by group action—i.e., the men assembled in council. There are festivals and rituals and superstitions and customs everyone seems to acknowledge and honor. Men are valued for their ability to communicate received wisdom, to quote and apply the aphorisms that have been handed down through the generations. The action of the novel involves Okonkwo's tragic fall from this natural state of grace due to changing circumstances over which he has no control and his own inflexible adherence to the old ways.

I'll not summarize the plot. The book is fifty years old and considered a classic; there's plenty on the web to give you an idea of the particulars—if you're into that sort of thing before picking a book to read. Rather, I want to look at the novel along the analytical axes I've been contemplating here at WoW.

"The drums beat and the flutes sang and the spectators held their breath. Amalinze was a wily craftsman, but Okonkwo was as slippery as a fish in water. Every nerve and every muscle stood out on their arms, on their backs and their thighs, and one almost heard them stretching to breaking point. In the end Okonkwo threw the Cat." (p.3, Anchor 50th Anniversary edition)

There are more touches such as the following, but not enough (for my tastes, that is):

"Her brass anklets rattled as she danced and her body gleamed with cam wood in the soft yellow light." (p.118)

And then in the climactic moments, it becomes intense again—re-emphasizing the power of the close-in focus:

"...Enoch boasted aloud that they would not dare to touch a Christian. Whereupon they all came back and one of them gave Enoch a good stroke of the cane, which was always carried. Enoch fell on him and tore of his mask. The other egwugwu immediately surrounded their desecrated companion, to shield him from the profane gaze of women and children, and led him away. Enoch had killed an ancestral spirit, and Umuofia was thrown into confusion.

That night the Mother of the Spirits walked the length and breadth of the clan, weeping for her murdered son. It was a terrible night. Not even the oldest man in Umuofia had ever heard such a strange and fearful sound, and it was never to be heard again. It seemed as if the very sould of the tribe wept for a great evil that was coming—its own death.

On the next day all the masked egwugwu of Umuofia assembled in the marketplace. They came from all the quarters of the clan and even from the neighboring villages. The dreaded Otakagu cam from Imo, and Edwensu, dangling a white cock, arrived from Uli. It was a terrible gathering. The eerie voices of countless spirits, the bells that clattered behind some of them, and the clash of machetes as they ran forwards and backwards and saluted one another, sent tremors of fear into every heart. For the first time in living memory the sacred bull-roarer was heard in broad daylight." (p.186-87)

As for Frye's anatomy, Things Fall Apart clearly satisfies his criteria for the novel genre. The central situation is the clash of cultures, colonial with indigenous. Okonkwo's character, larger than life in the world of the novel, though at peace within his own societal structure (even with his ostracism from it), cannot help but come in conflict when Western society intrudes into his world. And to his detriment at that. Achebe presents a view of a historical moment crystallized in the character and conflict of the Okonkwo character.

Similarly, Achebe's novel clearly fits Shroder's definition of a novel: Okonkwo is reasonably well-off in his society. His fall is tragic and comes as as result of his own hamartia: his inflexibility and Billy Budd-like reactivity. As Achebe tells us on p.4: "When he walked, his heels hardly touched the ground and he seemed to walk on springs, as if he was going to pounce on somebody. And he did pounce on people quite often. He had a slight stammer and whenever he was angry and could not get his words out quickly enough, he would use his fists. He had no patience with unsuccessful men...." His disillusionment with the overwhelming societal change that affects his life—a life that has gone on relatively the same for ever—is ultimately fatal, but his death is voluntary and consistent with his character.

As for my own notion of Ur-story—to wit, that the novel is a model of consciousness—Okonkwo's coming to consciousness of the new reality effecting his world produces both in him both pain and mortal shame. Yet, there is no contemplation of mortality: it remains as foreign to him as the white man's society and system of (ignorant) justice. He is warrior who has killed many men in battle. This is who he is. He murders his own "adopted" son because it is the way of things. He accidentally kills another boy at funeral celebration. There is no contemplation of death and mortality in him. Death is, for him and his society, part of the natural order of things. The contemplation of mortality is not. And that may, indeed, be the point: just as the colonials bring their religion and their systems of economics and justice to the indigenous worlds under their sway, they also bring the consciousness of sin and mortality.

This is not a Western novel. There is no grasping, as in Bellow's Henderson, for the "authenticity" of the native, which is, of course, the underbelly of imperialism. The political aim of colonialism is to impose its cultural structures on those it conquers/invades. The artistic class of the colonialists, ever-sensitive to the humanity of the situation, intuits the longing for the other in that moment and, like Bellow, tends to romanticize it. Yet, and this may be the tragedy of Western art, it misses the bigger imposition: it is naive, ignorant, innocent, unconscious of the trail of tragedy and horror colonialism leaves in its wake:

"The Commissioner went away, taking three or four ofthe soldiers with him. In the many years in which he had toiled to bring civilization to different parts of Africa he had learned a number of things. One of them was that a District Commissioner must never attend to such undignified details as cutting a hanged man from the tree. Such attention would give the natives a poor opinion of him. In the book which he planned to write he would stress that point. As he walked back to the court he thought about that book. Every day brought him some new material. The story of this man who had killed a messenger and hanged himself would make interesting reading. One could almost write a whole chapter on him. Perhaps not a whole chapter but a reasonable paragraph at any rate. There was so much else to include, and one must be firm in cutting out details. He had already chosen the title of the book, after much thought: The Pacification of the Primitive Tribes of the Lower Niger."