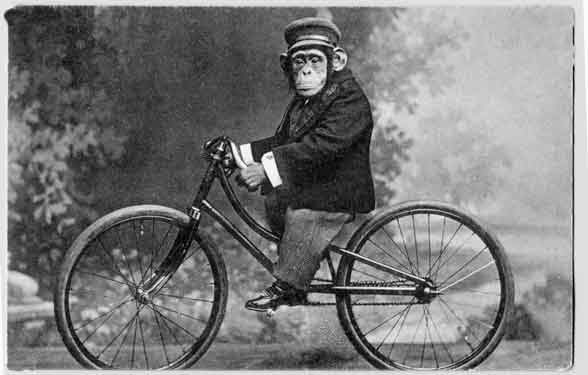 The first declaration of the International Necronautical Society Manifesto states : "That death is a type of space, which we intend to map, enter, colonise and, eventually, inhabit." Well, they are not original and they were not first. Flann O'Brien's The Third Policeman beat them to the draw. O'Brien's unnamed flaneur describes precisely such an arc, eventually lapsing into a stunned forgetfulness as he experiences the apparent eternal return of the same. (Or, alternatively, cycles down the drain toward extinction.)

Now, Nietzsche was no farceur, though Zarathustra gave me more than a few chuckles. His principle was more a moral one: a person should live as if everything he did would be repeated over and over again throughout eternity. [Groundhog Day anyone?] O'Brien is more of a fatalist: if you think life is absurd, wait'll you hit the afterlife.

Denis Donoghue, in his Introduction, cites Hugh Kenner's observation (re Beckett) that

The crucial place of Ireland in the recent history of Western literary art is accounted for by the historical fact that Ireland escaped the humanist dogma. Consequently the great Irish nihilists (for so they appear in a humanist perspective) have been the persistent reformers of the fictional imagination. Swift, a bare seven years after Robinson Crusoe, ascribed an overriding concern for footling verisimilitude to a mind so biased toward positivism and so devoid of moral resources that it could be permanently imposed on by talking horses." (xi)

"it is indeed characteristic of Irish fiction—or at least Irish anatomies—to stand aside from the common urgencies of feeling and to treat the whole farrago of sensibility as warranting merely speculative attention. The murder in The Third Policeman is accompanied by no sign of guilt or scruple: the ethical issue is disposed of in silence. Nature, conventionally a great source of heart-stirring, is not allowed to pour its benisons over the populace." (xi)

Of course, it is only fitting and proper that I take on a so-called anti-humanist text after declaring so positively my humanist creed in a previous post.

Our nameless 'hero' (for lack of a better term) in his fantastical world encounters (without parenthetical comment, appearing as he does to have no inner life beyond devising deceptions for avoiding conviction for the murder he commits) a two-dimensional police station filled with odd policemen and a number of magical devices, including an infinity of nesting boxes; an elevator to another (infinite) dimension; a society obsessed with bicycles; and a policeman who steals citizens bicycle parts, then hides them so he can then appear to find them; bicycles which are part human

I don't know if you ever pranked your high school or college teachers like this, but a group of us once invented a philosopher (I forget his name now) and cited several of his works innocuously in papers we submitted for several different college classes. We got away with it. None of the professors ever called us on it. O'Brien does the same thing here, beginning nearly every chapter with a reference to the absurd philosophus gloriosus, de Selby, and the contentious "scholarship" on him, right and left. "For my part I had completed my definitive 'De Selby Index' wherein the views of all known commentators on every aspect of the savant and his work had been collated," (14) the narrator assures us. de Selby, it turns out, had some interesting ideas:

"A row of houses he regards as a row of necessary evils. The softening and degeneration of the human race he attributes to its progressive predilection for interiors and waning interest in the art of going out and staying there." (21)

"Roads he regards as the most ancient of human monuments, surpassing by many tens of centuries the oldest thing of stone that man has reared to mark his passing." (37)

"'[A] journey is an hallucination'. The phrase may be found in the Country Album cheek by jowl with the well-known treatise on 'tent-suits', those egregious canvas garments which he designed as a substitute alike for the hated houses and ordinary clothing. His theory, insofar as I can understand it, seems to discount the testimony of human experience and is at variance with everything I have learnt myself on many a country walk. Human existence de Selby has defined as 'a succession of static experiences each infinitely brief', a conception which he is thought to have arrived at from examining some old cinematograph films which belongs probably to his nephew. From this premise he discounts the reality or truth of any progression or serialism in life, deniews that time can pass as such in the accepted sense and attributes to hallucinations the commonly experienced sensation of progression as, for instance, in journeying from one place to another or even 'living'." (50)

"If a man stands before a mirror and sees in it his reflection, what he sees is not a true reproduction of himself but a picture of himself when he was a younger man. ... Ultimately he constructed the familiar arrangement of parallel mirrors, each reflecting diminishing images of an interposed object indefinitely. The interposed object in this case was de Selby's own face and this he claims to have studies backwards through an infinity of reflections by means of 'a powerful glass'. What he states to have seen through his glass is astonishing. He claims to have noticed a growing youthfulness in the reflections of his face according as they receded, the most distant of them—too tiny to be visible to the naked eye—being the face of a beardless boy of twelve..." (64-5)

"In the Layman's Atlas he deals explicitly with bereavement, old age, love sin, death and the other saliencies of existence. It is true that he allows them only some six lines but this is due to his devastating assertion that they are all 'unnecessary'. Astonishing as it may seem, he makes this statement as a direct corollary to his discovery that the earth, far from being a sphere, is 'sausage-shaped.'" (93)

"[H]e held (a) that darkness was simply an accretion of 'black air', i.e. a staining of the atmosphere due to volcanic eruptions too fine to be seen with the naked eye and also to certain 'regrettable' industrial activities involving coal-tar by-products and vegetable byes; and (b) that sleep was simply a succession of fainting-fits brought on by semi-asphyxiation due to (a)." (116, n.1)

"[H]is ideas of paradise are not without interest. ... Briefly he indicates that the happy state is 'not unassociated with water' and that 'water is rarely absent from any wholly satisfactory situation'. ... The story is one of a long succession of prosecutions for water wastage at the suit of the local authority. At one hearing it was shown that he had used 9,000 gallons in one day and on another occasion almost 80,000 gallons in the course of a week. ... none of the vast quantity of water drawn in ever left the house." (144-6)

Of course, all of the foregoing is duly documented and footnoted—some notes running upward of eight or nine pages, all tongue-in-cheek. O'Brien introduces each major section of the book with a de Selby disquisition which, oddly, relates the main themes of that section and, what's more, de Selby's views turn out to be plausible in the absurd world of the text. I'm sure much scholarship has been brought to bear on this point. (O'Brien giggles in the background.)

Again, we are in the realm of the Ur-story. The strategy O'Brien a/k/a O Nuallain a/k/a na gCopaleen adopts is the absurdist one: turn the whole thing into a farce. Some readers might want to turn the whole thing into an allegory—maybe with the police representing the Church and de Selby Aquinas or some such. I resist this. The story is what the story is. O'Brien is showing us that, on his conception, death takes us from a three-dimensional time-space world to a bizarre timeless, two-dimensional space which has its own conception of death and portal to its own eternity which, to my mind, would be the one-dimensional one, and on and on to nothingness: a gradual diminution not unlike some of de Selby's philosophical musings.

"There is nothing mysterious about the Necronautical project. The aim announced in the First Manifesto of exploring, mapping and colonising the space of death does not suggest a 'beyond' of which we have knowledge, nor, emphatically, the spurious tales and consoling fictions reproduced by culture. The space of death is traced in the boundaries, horizons and faults within art, literature and language; lines, moreover, which are not transgressed but are woven into the texture of our craft. Necronautical materialism has no message from the 'other side' but is a technique for subjecting event, performance, text and map to rigourous examination and transformation." [Used without permision which is apparently okay.]

"'The first beginnings of wisdom,' he said, 'is to ask questions but never to answer any. You get wisdom from asking and I from not answering. ...Turn everything you hear to your own advantage. Always carry a repair outfit. Take left turns as much as possible. [Right turns in non-British countries.] Never apply your front brakes first.'"

In a world predominated by bicycles and men who are part bicycle, such wisdom is deserving of heed.
Posted by Jim H. at 18:22