"Very true he had promised to lend her a book. A novel was the only thing worth considering for her. But no mind ever grew fat on a diet of novels. The pleasure which they occasionally offer is far too heavily paid for: they undermine the finest characters. They teach us to think ourselves into other men's places. Thus we acquire a taste for change. The personality becomes dissolved in pleasing figments of imagination. The reader learns to understand every point of view. Willingly he yields himself to the pursuit of other people's goals and loses sight of his own. Novels are so many wedges which the novelist, an actor with his pen, inserts into the closed personality of the reader. The better he calculates the size of the wedge and the strength of the resistance, so much the more completely does he crack open the personality of his victim. Novels should be prohibited by the State." Elias Canetti, Auto-da-Fé 42

Diabolical. Canetti, the novelist, uses his protagonist, Peter Kien eminent Sinologist, to lampoon and, indeed, undermine his (C's) own project. Quite a feat of critical self-examination, I'd say. But it is the feat of someone versed in the arts of critical thinking. Not everyone is, and this is an argument I've been making around here since WoW's beginnings some 3 years ago!

Remember the great controversy last year around this time concerning health care: DEATH PANELS! "The America I know and love is not one in which my parents or my baby with Down Syndrome will have to stand in front of Obama’s 'death panel' so his bureaucrats can decide, based on a subjective judgment of their 'level of productivity in society,' whether they are worthy of health care. Such a system is downright evil." quoth Sarah Palin.

Politifact called it the biggest lie of 2009.

Now, the conservative Republican congress of Arizona and Jan Breuer, Governor, have instituted the very sort of thing they feared the Democrats wanted to institute.


"Starting in October, [2009] a measure passed by the Republican-led state legislature began denying Medicaid funds for organ transplants such as bone-marrow, lung, heart and liver transplants, which can be very expensive and are often performed in life-threatening cases.

The New York Times reports that Arizona doctors deem it a "a death sentence for some low-income patients, who have little chance of survival without transplants and lack the hundreds of thousands of dollars needed to pay for them."

Is that irony? Sort of, but it's more than that; something more insidious and, some might argue, pathological.

This is not the only incident of this sort of thing. The latest iteration? The Democrats are trying an unprecedented power grab when they talk about reforming the rules of the Senate.

And the constant propagandistic repetition of the use of the words 'government takeover' to describe anything that smacks of regulation or consumer protection.

Why is this disingenuous? Think back to the actual power grabs by the conservatives when they were in power: e.g., the PATRIOT Act; Newt Gingrich's shut-down of the Federal Government in a fit of pique at Pres. Clinton; the impeachment of Pres. Clinton and the series of Republican Speakers of the House who, during their pursuit of Clinton for a sexual indiscretion, had to abdicate power because of their own peccadillos.

Why the need to lie? I'm not sure they are lies.

To explain, I have to draw on some earlier posts here about the nature of the authoritarian personality: the whole series of posts on swarms, crowds and power, etc. [There are several pages of posts.]

I think these are all fairly clear examples of psychological projection. There's nothing earth-shaking about that observation. "Projection" is:


"a psychological defense mechanism where a person unconsciously denies their own attributes, thoughts, and emotions, which are then ascribed to the outside world, such as to the weather, or to other people. Thus, it involves imagining or projecting that others have those feelings.

Projection reduces anxiety by allowing the expression of the unwanted unconscious impulses or desires without letting the conscious mind recognize them.

An example of this behavior might be blaming another for self failure. The mind may avoid the discomfort of consciously admitting personal faults by keeping those feelings unconscious, and redirect their libidinal satisfaction by attaching, or "projecting," those same faults onto another."

I made a fairly clear argument to that same effect here with respect to V.Pres. Cheney and Sarah Palin and the Tea Party on the issue of whether Pres. Obama should use war as a tool of domestic politics:


"arguably the two top Republicans in the country are debating whether the President should use war as a political tool. Palin says yes. Cheney says Palin should be careful what she says; presidents should never think this way—out loud. ...Clearly, they think about these things. And that should give us all pause."

This makes sense: the anxiety produced by being subject to so much fear must be repressed, especially if that fear is of one's own dark side—the impulse to dominate. The authoritarian personality, as I've pointed out, requires both leaders and followers; it does not, however, allow for critical thought. And by critical thought I mean the ability to evaluate something on its merits in a rational, disinterested judgment—including one's self and one's intentions, goals, actions, merits, faults, etc.

It's easier to lay one's faults and flaws, one's worst impulses, off on an 'other', to blame others for one's failings. Projection.

For the Freudians, the dynamic of projection is unconscious. The projector is incapable of examining themselves and their own impulses and desires—that applies and is, in fact, amplified in the situation of crowd behavior where the desire to be swept up in the emotion of the crowd overpowers any sort of moral reasoning or rationality.

The more authoritarian the personality, the greater the tendency to project (i.e., defend the insecure self). [Gives an interesting twist on the "Project for a New American Century", eh?]

Projection: watch for it. Watch out for it. 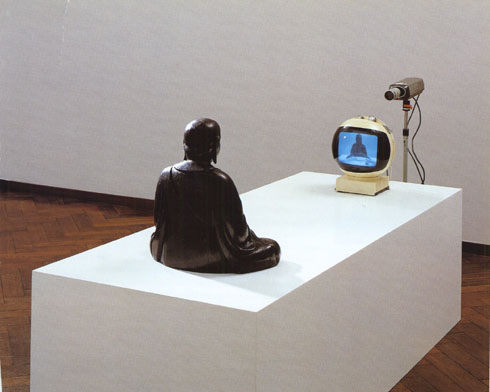 We're paying the ultimate opportunity cost of not having novels like Eulogy published and embraced. Even in the brief "more re: art-y" excerpt you published in the prior post, I can detect an embedded critical thinking primer.It would come in pretty handy right about now. (Good thing Tom Paine didn't wait for corporate publishing to give him the green light.)

This phrase "condition of our historical throwness" I read last night in the intro to The Speculative Turn, is holding me temporarily captive. From inside its linguistic rodeo I see Sarah Palin as Evil's bouncing ball. Follow her and weep.

But hark, here's another well-turned phrase from the same source: "...asserts the fundamental novelty that is able to emerge beyond any pre-constituted totality." Is that your name in the ellipses, Jim?