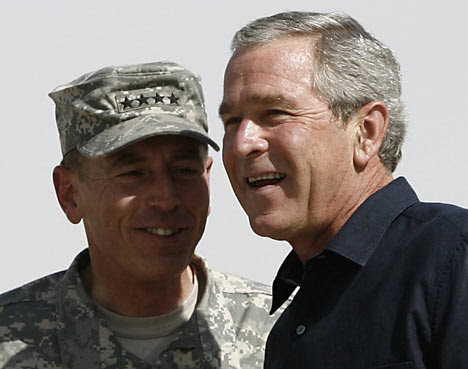 In November of last year, I penned a post about the Afghan surge strategy. It generated a lot of comment here and, thanks to Frances Madeson, was nominated for a 3QuarksDaily political essay prize. The gist of that piece was that the U.S. should focus on the original, limited mission of the Afghan incursion, root out al-Qaeda (the ostensible perpetrators of 9/11) and its supporters, and get out.

New information has come to light that is causing me to rethink some aspects of that piece.

First, General Stanley A. McChrystal, the commander of U.S. and allied forces in Afghanistan and chief proponent of the U.S. troop surge, was recalled to Washington by President Obama and relieved of his command after some of his and his staff's remarks about the civilian leadership were published. (Score one for the DFHs.)

Second, Gen. McChrystal's boss, General David Petraeus, commander of CENTCOM, was demoted and sent back to a battlefield command in Asia.

Now we learn, according to Michael Leiter, director of the National Counterterrorism Center (NCTC), there are only approximately 50 to 100 al-Qaeda in Afghanistan. And in Pakistan there are upwards of only 300 or so.

AYFKM? Are we to believe that these events are unrelated? Seems to me the dots can be connected readily: Petraeus and McChrystal bullied the relatively new and possibly militarily naive President Obama into supporting what they deemed a "necessary" surge of 40,000 U.S. counterinsurgency troops to fight an intransigent enemy, then 'intelligence' comes to light showing that there are only a few dozen bad guys left in Afghanistan, so Obama shitcans his scheming generals. (A demotion is a demotion is a demotion. A rose by any other name...)

Only that Secretary of State Hillary Clinton also proudly takes credit (see below) for bullying Obama into the surge. Where's her demotion?

Clinton is now influencing policy more than she ever has, especially in close partnership with Defense Secretary Robert Gates. Subtly yet unmistakably, her somewhat greater hawkishness is beginning to show up in policy. While Obama's no slouch at showing displeasure himself, he's depended on Clinton to hammer Iran (which is becoming a "military dictatorship," she recently declared, setting the administration's new tough tone), and to harangue Israeli Prime Minister Benjamin Netanyahu over his defiance of U.S. demands for a settlement freeze. She also criticized the Russians in their own backyard over Moscow's work on an Iranian nuclear-power plant. Clinton politely plays down her role as Obama's bad cop. "I don't think there's anything as formal as that," she says. "With every tough message that I deliver, it is embedded in a much broader context. It's not, 'You're with us or against us.' It is, 'We have a lot of business to do.'?"

Even so, the Clinton-Gates axis was critical to persuading Obama to add another 30,000 troops in Afghanistan, a senior White House official concedes.