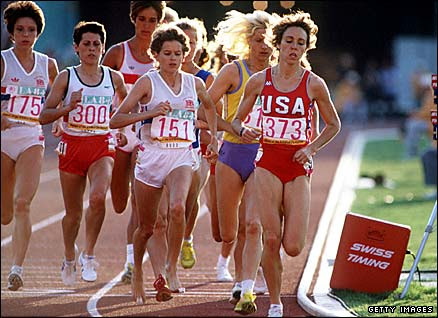 I've been sitting on this post for some time now. It's not so much a lit-crit or lit or political essay as a personal statement.

First, some background: I began running in college. In high school, if I could make it twice around the track without being completely winded, I felt I had accomplished something. In college I discovered running trails and around multi-field soccer complexes. I loved running on grass. In grad school I started extending my distances and ran some 10Ks in fairly decent times (sub-7s). New York City and professional and parental obligations slowed me down and fattened me up some. After moving to ATL, in order to regain some fitness, I began jogging a mile or two.

As a middle-aged man, I began feeling some adverse effects from running: (1) something resembling Plantar fasciitis in my left heel, (2) a weak left knee, (3) a left hip ache that felt like my spine/hip connection was malaligned, among others. I would run, say, two miles and have to spend a couple days recovering—stretching, doing yoga, inversion table, etc.—to get right. I spent good money on top running shoes, but to no avail.

In August my life changed! On August 18, I saw Christopher MacDougall on The Daily Show with Jon Stewart. His tale about barefoot or barely-shod ultramarathon runners caught my attention. I did some on-line research and thought, "Geez, if I could run again without pain, how wonderful would that be?"

I found a large soccer field and ran some laps around it, first with shoes, then without. It felt odd, but invigorating. And NO PAIN! I began walking around my neighborhood streets barefooted to build calluses on my soles, but all I got was a few blisters. This was not going to work on the rough concrete streets around here for me. Zola Budd I ain't.

I continued to read up and found discussions of Vibram Five-Finger shoes. I had seen them in the local, funky shoe store where my teenagers got their Birkenstocks and in the local REI outdoor store. So, when I had a free hour, I went to REI, fitted a pair, and decided to try them out. I needed a new pair of running shoes, and these were one-half to one-third the price of the sort of good pair I felt I needed. What the hell! If they didn't work out for running, I could wear them for driving or water shoes or whatever.

I love them! I absolutely love them! I began running in them the first day, on the soccer field and a short trail I discovered in a neighboring neighborhood. I couldn't believe how they felt. I was stronger, able to run further, and felt great. I knew I could use them on trail runs and did my normal, short local trail run several times that first week. The infatuation was on.

Then I decided to take them out on the road. I did my "long" two-mile run—successfully. I wasn't winded and felt I could go longer. I was incredulous. The next time I decided to extend it. At about mile four, my calf muscles seized up like they were made of bricks. I hobbled back home and Wisdoc lovingly massaged my calves that night. But here's the thing: no PF, no weak left knee, no hip/spine pain. None. It was like my calves were taking the shock that had my heels, knees, and hips had been absorbing. This calf pain, I realized, was of the 'no-pain-no-gain' type, not the incipient injury type.

I read more and discovered that you really are supposed to ease into this style of running because you exercise different configurations of muscles than with running shoes. I rested for four days and the calf pain faded away. My next road run was just two miles; no soreness. And I eased up the distances. Three weeks ago, after a few longish runs of about 4 and 5 miles, on a whim, I ran a 10K for the first time in about 25 years. I pushed myself and, after minimal training, had 10 minute splits for the miles. I finished the 6.2 miles in just over an hour. My calves were sore but not nearly as much as before. I took my daughter shopping that afternoon and coached a baseball game the next day.

Bottom line: I bought the shoes in late August. I ran a painless 10K road race in early October and I'm running10-15 miles a week comfortably now. The shoes were a revelation.