Thyraphobia, or Purity of Heart is to Fear One Supposedly Fun Thing I'll Never Not Do Again (Pt. 4) 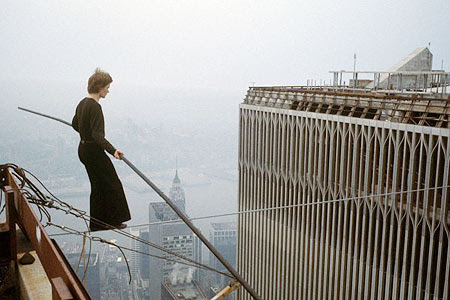 I'll be the first to admit I've always had a bit of acrophobia—but only at certain kinds of heights. Walking across a swinging suspension bridge, for example, or being stuck atop a stopped, rickety ferris wheel, or riding up that clanking climb on the first hill of a roller coaster: those sorts of things make me a bit panicky. Not flying in a jet plane, though, nor being inside a tall building, nor going up in the Arch in St. Louis.

[Sidebar: Oddly, I used to get a little queasy standing on the observation deck atop the old World Trade Center when we would entertain out-of-town guests in NYC—which was the only time we ever did those sorts of touristy things—but never up on the Empire State Building. The WTC felt like it was swaying with the wind, which, of course, it was as was the Citicorp Center where I used to work on like the 60th floor which itself would visibly sway in a strong wind. Sometimes at night the swaying would cause doors in empty offices to slam shut because of the counterweighted movement—and yeah, it was kind of spooky say at about 3 a.m. late on a Sunday night when I had a Monday a.m. deadline and nobody was even in the whole building much less on my floor and I was just a little delirious in the first place from a weekend's sleep deprivation. On a further side note, I also used to wonder what would happen if one of the Twin Towers toppled over whenever I would walk under them which was every day for several years while I was in law school (but that's a post for another day. They just seemed so precarious. Naturally, I just chalked it up to projecting my own acrophobia onto those inanimate duoliths [Note to self: Good research topic for causes/motivations of 9/11 masterminds having chosen the WTC's as target? Did they experience the same sort of emotional reaction at some point in the past and have a destructive rather than a phobic projective urge? Gives one pause.]).]

Anyway. The point is I'm exquisitely aware of my acrophobic tendencies, and I take active steps to allay my fear. (1) Whenever possible, I avoid. I would never, for instance, attempt to walk a tightrope or take a job walking iron. I don't rockclimb—though I'll hitch up and go to one of those fake climbing walls and shinny right on up to the top and ring the bell (though I have to admit the first time I tried I got halfway up and froze and had to come down just to test how well I was belayed). And (2) I cope. I close my eyes and use yoga breathing and relaxation techniques I learned in drama class and during college. Sometimes I even try to visualize, you know, a happy place sort of thing, too. And usually it works.

Fact is prior to my attempt at skydiving, as I said, I'd been fairly successful at overcoming my acrophobia (that is conquering my panics), primarily because my panicked responses had been proportional to the stimuli—and the stimuli had been relatively mild. I don't freak out on roller coasters or ferris wheels or well-built suspension bridges. I grab on to something—a rope, a rail—, I suck it up, and go on, often even enjoying the experience.

But it's more than a feeling we're talking about here or a mild fright; a panic attack is an overpowering physical sensation. Hell, George Orwell devised an entire system of societal control based solely on the inducement of it: Room 101. And David Chase created six award-winning seasons of premium American pay-TV based on one character's inability to deal with his own unmotivated experience of it. It's disorienting. Discombobulating.

Just so we know what we're talking about here, the DSM IV lists the diagnostic criteria for a panic attack as follows:


A discrete period of intense fear or discomfort, in which four (or more) of the following symptoms developed abruptly and reached a peak within 10 minutes:

And, knowing all this, I decided I was man enough to challenge my own phobia and the debilitating panic it induced in me, amp up the stimuli to the extreme, and attempt to skydive.

No doubt, Wisdie, overcoming your tendency to panic is a laudable feat. No need to explain in such detail -- makes you look defensive, and Congolese guerillas use the DSM IV only for toilet paper or rolling papers. Panic is a rich-people's disease. And my point earlier was that the fact of your experiencing panic in such completely safe, supervised, and protected circumstances is a clear sign of the kind of false consciousness that I was talking about. Fear of heights is a really good way to avoid thinking about things that are REALLY fucked up.

Thanks again, Toast. I can't say I disagree with anything you've noted. I understand & acknowledge the neurotic aspect of it, but there's a larger point 'building' (this particular homonym and the lengthy parenthetical in Pr. 4 should clue you in as to the direction), however gradually, however circumspectly. I appreciate my privileged POV. And from that POV, terror a/k/a panic is what must not be named, what must be avoided, indeed what must be globally warred on. The personal is, as you suggest, the political.

Poor Elbaggy, my left cheek. Boy's a nasty, nasty little germ. Your points are, however, entirely valid. Thing is, you should also give yourself credit for the insane bravery it takes to raise kids and work in an office. That's the real scary shit. But now I'm just repeating myself.