Thyraphobia, Or Purity of Heart Is to Fear One Supposedly Fun Thing I'll Never Not Do Again (Pt. 8) 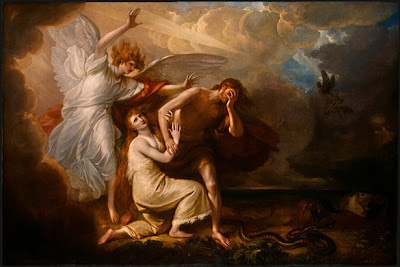 Without getting all meta on you, you can see from the dates that it took me a full week to draft the last couple of posts in this series. There are many reasons for that and not a few excuses. Bottom line: these were hard posts to draft. The facts themselves were memorable and easily recalled, but it was the embarrassment, the memory of being unable to conquer my own fear, admit it to myself, and attempt to understand it that held me back from committing it to writing and publishing it on the internet.

But no, bottom line: I did not jump. I was scared. And I couldn't get past it.

There it is. I've admitted my cowardice in writing. To my shame, I've confronted my own lack of courage publicly.

Why was it so hard?

Fear is a bad feeling—not the evolutionarily healthy sort of 'be wary of danger' fear that causes us humans to be alert to our circumstances and cautions us to take care what we're doing or where we're stepping in response to real stimuli. Fact is, I should've felt a certain amount of fear there at that door. The pros told me they did, every time. That's the good type of fear, a positive feeling—the intrusion of consciousness. The fear I'm talking about is the wild, neurotic panic I felt as I stared out that open door looking straight down two miles to the ground, even with a parachutist strapped to my back. It was a paralyzing terror that welled up from some place deep in my unconscious and took over my rational self. That's what made it so scary: I had no control over my own feelings. It was too intense for my body. And I did not want to experience that feeling again.

No one likes to confront bad feelings, much less dwell on them by writing about them.

But, believe it or not, there was more: an even worse feeling, if you can imagine.

After the other brave souls had jumped, I sat next to Andy on the floor behind the pilot's seat. The only thing I could say, at first, was "I'm sorry. I'm sorry." I repeated it over and over, my forehead resting on my my hand. I don't know whom I was apologizing to—maybe myself. Was I sorry he didn't get the chance to jump? Was I sorry for taking up space on the plane and blocking the door? Was I sorry I couldn't get a grip on my own terror? Probably some of all three.

He told me to hold on and be prepared to equalize the pressure in my sinuses just as the plane banked and dove back toward the airport. I felt the pressure building up and felt nauseated. I pinched my nose and blew out (a scuba diving skill, by the way) and the feeling immediately subsided.

Andy and I talked on the way down about his wife, who is a commercial pilot and a writer, and his day job as a lawyer.

When we landed, I think the people who were camped in the mouth of the hangar were surprised to see someone get off the plane—or maybe that's why they came in the first place: that same sort of prurience that brings people to NASCAR racing. One man, the guy who first mentioned the fear of the door, came over and told me that he 'chickened out' his first time, too, and that now skydiving is his favorite thing to do. "You just have to force yourself through that door."

"You think you'll want to try it again?" he said.

Then I saw Jeff, the blond Jeff who, in our conversation, managed to repeat his Dirty Harry bromide: "Man's got to know his limitations."

"Then I guess I've learned one of mine," I said.

All this—the kind gestures, the sympathizing words (prurient or not)—was meant, I assume, to make me feel better about myself. The folks I spoke to were genuinely nice, including the instructors. But it didn't work. I specifically did not feel better about myself. I felt shame. I had let myself down. I paraded my humiliation through the crowd of onlookers who I know must've been talking about how I'd just come out of the plane.

And as bad a feeling as terror is, shame is even worse.

"I felt shame. I had let myself down. I paraded my humiliation through the crowd of onlookers who I know must've been talking about how I'd just come out of the plane."

Braver (and infinitely less foolish) to walk out of that plane into a crowd of snickering onlookers than to jump, man.