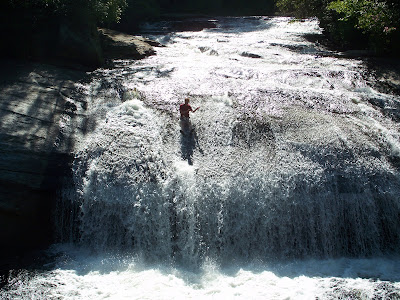 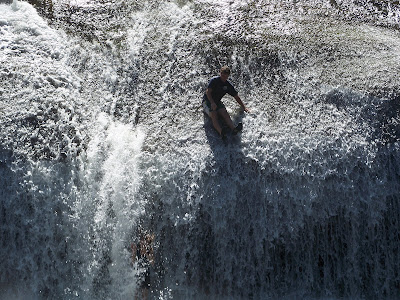 This is not Jim H. sliding down a waterfall in Gorges State Park in Western N.C. this weekend.

------------------
This post on Nicholson Baker's Mezzanine generated far and away the most comments of any post of mine here at WoW. It was spirited and probing, the kind of discussion one wishes every post would generate. You bloggers know what I mean.

The leader of the dissenting commenters, Steven Augustine, has now posted a worthwhile look at Baker's complex little book over at Dan Green's new critical journal Critical Distance. I encourage you to check it out.

He situates Mezzanine as a coming-of-age epiphany, sort of like a Catcher in the Rye without the attitude. The money quote:

"it isn’t at midpoint between birth and death that Howie finds himself on the escalator of life, but half-way on his journey towards middle age, which he projects (with a numerical value of 40 years) as the point at which he “would finally have amassed enough miscellaneous new mature thoughts to outweigh and outvote all of those childish ones,” a reflection that colors most of the book, which trades extravagantly in the illuminated detritus of a happy, precocious childhood. The book is largely a eulogy to Howie’s childhood."

It's a solid reading.

At the same time, Augustine sees Baker's book as a rhapsodic eulogy for the artifacts of the Industrial Revolution, an era Baker (though not Howie) knows has passed.

Is there a connection between the two?
Posted by Jim H. at 22:02

Email ThisBlogThis!Share to TwitterShare to FacebookShare to Pinterest
Labels: Nicholson Baker, The Mezzanine

Jim, I very much appreciate your appreciation.

I am so weak. I am practically under doctor's orders not to be reading anymore, but to be writing and living; but, oh my God, this is living! Solid reading? I am panting. That thing is dazzling. About halfway through I had to literally put sunglasses on to finish it. I actually feel sorry for whoever is going next. And I think I better understand the approach of the Affliction essay in light of this one. Anything Steven does, any old thing he does, he just cracks the mold. His interview with Finn, was it? when they were discussing DFW and he explained that Infinite Jest wasn't long, in fact it was short, an intense compression. He thinks in epiphanies, epiphanies and puns, and you bet it's fun. Crazy fun. What's more fun? That's him in the picture, riding the rushing water. Making it look so easy. And can't you just see the free and easy smile on his face when he's floating on his back thinking about the ride? Everyone, please, lose your religion. Let it ride; just let it ride.

I have but one wish or maybe it's a prayer. Please God, let there be a woman out there fierce enough and beguiling enough to mix it up with you guys. (Not just a hole to be filled, thank you very much, Nigel.) That would make it even more fun, don't you think?

You're the Wow, Steven. You and Daniel. You turned the page.