Ur-story: The Death of Meaning (Part 2) 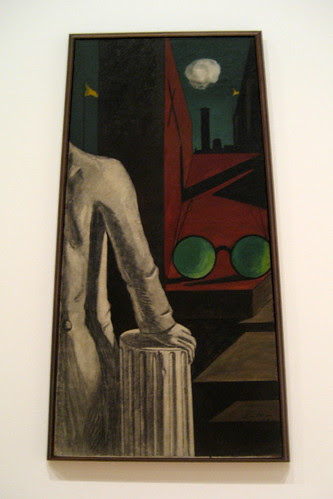 "It will often prove useful in philosophy to say to ourselves: naming something is like attaching a label to a thing." (§ 15)

"We may say: only someone who already knows how to do something with it can significantly ask a name." (§ 31)

"And now, I think, we can say: Augustine describes the learning of human language as if the child came into a strange country and did not understand the language of the country; that is, as if it already had a language, only not this one." (§ 32)

"This is connected with the conception of naming as, so to speak, an occult process. Naming appears as a queer connexion of a word with an object." (§ 38)

"For naming and describing do not stand on the same level: naming is a preparation for description. Naming is so far not a move in the language-game—any more than putting a piece in its place on the board is a move in chess. We may say: nothing has so far been done, when a thing has been named. It has not even got a name except in the language-game. This was what Frege meant too, when he said that a word had meaning only as part of a sentence." (§ 49) L. Wittgenstein, Philosophical Investigations

Wittgenstein wanted to show how problematic the relationship between language and reality truly is, how meaning is by no means a simple, necessary thing. As we all know, language is slippery. Languages evolve over time, incorporating other languages, and die. Within a given language, entropy reigns: the meanings of words change over time and across space and, if we follow Frege, with usage—one thinks here, e.g., of the simple semantic slippage in the usage of the word 'enormity' from meaning strictly 'great evil' or 'extreme wickedness' to meaning 'large' or 'of great size' by virtue only of its similarity to the word 'enormous'.

Likewise, things change; they evolve (as does our understanding of them), they come into being and pass out of existence. Situations change and contexts alter things. There can be, in other words, no necessary relation between the names we use for things and the things themselves. There is no foundation in reality for meaning—where, by foundation, we mean an actual point of connection between reality and language—only our agreement or mutual consensus.

This is language demystified, deromanticized, deconstructed.

The haggard cult at the heart of Don Delillo's The Names exists in reaction to this contingency and has devised, albeit intuitively, a solution to this quandary. The cult, believed by the POV, James Axton, to be called the Names, or Ta onomata in Greek, has really only one rite: human sacrifice. They settle in some remote, desolate area (an island, a mountain, a desert) where there are few legal or institutional structures in place, identify a potential victim—usually someone lame or retarded or mad and near to death, learn his/her name, keep up with their victim's whereabouts, and wait for the victim to enter a town that has the same initials as the victim's name where they ritually kill the victim by smashing in his/her skull with such primitive tools as hammers or stones.

It is as if they are attempting to affix the person to the place, based solely on the quite arbitrary coincidence of the initials. In the context of the novel, this is a larger metaphor for stemming the ineluctable leakage of meaning. Naming, which Wittgenstein (and Frege before him) identified as at the heart of meaning, should somehow be necessary to the thing, to the person, this bedraggled cult seems to be crying.

It's really quite simple. This connection between the victim's initials and the site of their ritual sacrifice is the central truth of ta onomata.

Two key characters make it their mission to uncover this obscure cult. One is Frank Volterra, an indie filmmaker. The other is Owen Brademas, an archaeologist interested in deciphering ancient writings and inscriptions. A shorthand way of viewing these characters is to think of Volterra as Francis Ford Coppola filming "Apocalypse Now" based on Conrad's Heart of Darkness, and to think of Brademas as an aging, world-weary Indiana Jones.

Delillo makes a point of showing us how Volterra is unable to penetrate the mysteries of the cult. He never actually locates them, though he does manage to meet an escapee. Volterra wants to film the cult in the midst of its grisly ritual from the air. An aerial shot, with the wash of helicopter blades kicking up dust and sand, held steady on the group as they do their deed. This would be the crowning filmic commentary on the Twentieth Century.

"He had no plans to shoot in sequence except for the ending. The ending would be the last thing he'd shoot. He told me how he'd do it. He wanted a helicopter. He wanted the cult members and their victim arranged for the murder. The pattern has been followed to this point, the special knowledge you talk about. The old shepherd is in place and the murderers are in place, with sharpened stones in their hands. Frank shoots down from as close in as the helicopter can safely get. He wants the wind blast, the blast from the rotor blades. They murder the old man. They kill him with stones. Cut him, beat him. The dust is flying, the bushes and scrub are flattened out by the rotor. No sound in this scene. He wants the wind blast only as a visual element. The severe angle. The men clutched together. The turbulence, the silent rippling of the bushes and stunted trees. I can quote him almost word for word. He wants the frenzy of the rotor wash, the terrible urgency, but soundless, totally. They kill him. They remain true to themselves, Jeem. That's it. It ends. He doesn't want the helicopter gaining altitude to signal the end is here. He doesn't want the figures to fade into the landscape. This is sentimental. It just ends. It ends up-close with the men in a circle, hair and clothes blowing, after they finish the killing."

I stayed in the living room for a while after she went to bed. I thought of Volterra in the mountains, hunched in his khaki field jacket, the deep pockets full of maps, the sky massing behind him. Sentimental. I didn't believe a word she'd said. He wouldn't follow it that far. He'd followed other things, gone the limit, abused people, made enemies, but this hovering was implausible to me, his camera clamped to the door frame. The aerial master, the filmed century. He wouldn't let them kill a man, he wouldn't film it if they did. We have to draw back at times, study our own involvement. The situation teaches that. Even in his drivenness he would see this, I believed." (248-49)

The filmic art, Delillo seems to be saying, stops short of reality. It objectifies—and nicely—that which the camera sees, but it does not and, more importantly, cannot capture our own complicity in the reality it seeks to present. This is the novelistic art, the prerequisite for meaning.

And Brademas, though he ultimately finds the cult and stays with them and learns their secrets, cannot bring himself to join them or, for that matter, even witness the act.

"The world has become self-referring. You know this. This thing has seeped into the texture of the world. The world for thousands of years was our escape, was our refuge. Men hid from themselves in the world. We hid from God or death. The wrold was where we lived, the self was where we went mad and died. But now the world has made a self of its own. Why, how, never mind. What happens to us now that the world has a self? How do we say the simplest thing without falling into a trap? Where do we go, how do we live, who do we believe? This is my vision, a self-referring world, a world in which there is no escape." (297) ...

[As the men of the cult head out for the kill] Owen entered one of the silos and sat in the dark. It was the smallest of the structures, five feet high, and he watched the night sky rapidly deepen, stars pinching through the haze. That was the universe tonight, a rectangle two and a half feet high, three feet long. At the lower edge of the opening he could see a narrow band of earth losing its texture to the night. (303) ...

"You stayed in the silo through the night."

"Yes, of course. Why would I come out, to watch them kill him? These killings mock us. They mock our need to structure and classify, to build a system against the terror in our souls. They make the system equal to the terror. The means to contend with death has become death. Did I always know this? It took the desert to make it clear to me. Clear and simple, to answer the question you asked me earlier. All questions are answered today."

"Is this what the cult intended all the time, this mockery?"

"Of course not. They intended nothing, they meant nothing. They only matched the letters. What beautiful names. Hawa Mandir. Hamir Mazmudar." (308)

The archaeologist, the scholar is afraid to confront life, death. Affronted. He hides from things, picks up hints from afar, tries to infer meaning, and tells us as best he can what they mean, though from his narrow, indirect perspective: "If you wanted to compose a mighty Homeric text on my life and fortunes, I might suggest a suitable first line. 'This is the story of a man who was not serious.'" (300)

Life just is this hammering out of meaning, and scholastic practice, though necessary, is disengaged. Unserious. The reality of life and death cannot be allowed to penetrate the silo of systems and structures he has surrounded himself with and curled up into for comfort and shelter.

Email ThisBlogThis!Share to TwitterShare to FacebookShare to Pinterest
Labels: DeLillo, The Names, Ur-story