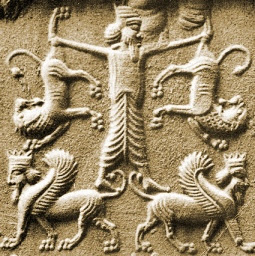 Again, we're with the Ur-story theme. As a brief footnote: Ur is often thought to be the first true city, the beginning of not only Western but human civilization. It's in present-day Iraq, near the town of Nasiriyah. To refer to something as the Ur-[something] means to consider it the ground or basis or origin of that thing.

A neighboring city, Uruk, was the supposed home of an early king named Gilgamesh, who lends his name to what is, to the best of my knowledge, one of the oldest literary texts: The Epic of Gilgamesh. In keeping with our thesis—namely that the Ur-story concerns the inevitability of death and loss and the ways we deal with it—we should expect this earliest story to reflect and state this theme. And it does.

In a passage of remarkable emotional depth, we read:

[Gilgamesh] touched [Enkidu's] heart but it did not beat, nor did he lift his eyes again. When Gilgamesh touched his heart it did not beat. So Gilgamesh laid a veil, as one veils the bride, over his friend. He began to rage like a lion, like a lioness robbed of her whelps. This way and that he paced around the bed, he tore out his hair and strewed it around. He dragged off his splendid robes and flung them down as though they were abominations.

In the first light of dawn Gilgamesh cried out, "I made you rest on a royal bed, you reclined on a couch at my left hand, the princes of the earth kissed your feet. I will cause all the people of Uruk to weep over you and raise the dirge of the dead. The joyful people will stoop with sorrow; and when you have gone to the earth I will let my hair grow long for your sake, I will wander through the wilderness in the skin of a lion." The next day also, in the first light, Gilgamesh lamented; seven days and seven nights he wept for Enkidu, until the worm fastened on him. Only then he gave him up to the earth, for the Annunaki, the judges, had seized him.

The Gilgamesh issued a proclamation through the land, he summoned them all, the coppersmiths, the goldsmiths, the stone-workers, and commanded them, "Make a statue of my friend." The statue was fashioned with a great weight of lapis lazuli for the breast and of gold for the body. A table of hard-wood was set out, and on it a bowl of carnelian filled with honey, and a bowl of lapis lazuli filled with butter. These he exposed and offered to the Sun; and weeping went away.

Bitterly Gilgamesh wept for his friend Enkidu; he wandered over the wilderness as a hunter, he roamed over the plains; in his bitterness he cried, "How can I rest, how can I be at peace? Despair is in my heart. What my brother is now, that shall I be when I am dead. Because I am afraid of death I will go as best I can to find Utnapishtim whom they call the Faraway, for he has entered the assembly of the gods." So Gilgamesh travelled over the wilderness, he wandered over the grasslands, a long journey, in search of Utnapsihtim, whom the gods took after the deluge; and they set him to live in the land of Dilmun, in the garden of the sun; and to him alone of men they gave everlasting life.

The epic is incredibly rich, and this passage goes right to the heart of its significance. Enkidu is the classic feral child; he was raised by wild beasts. Only a week of orgiastic sex with a temple prostitute could civilize him. He chooses to leave his wilderness home and travel to Uruk, where he disrupts Gilgamesh's droit de seigneur prior to a wedding festival. They fight, then become fast friends out of mutual respect. After a period of idleness and becoming fat and lazy in the city, they decide to go out and tame the wilderness forest. To do so they first must defeat Humbaba, the monstrous guardian of the cedar forest. They urge each other along when they falter, and together they defeat this foe. Seeing all this the goddess, Ishtar, falls for the manly Gilgamesh, but he spurns her with insults about how she has treated all her past lovers. She runs home to her father and convinces the gods to set the Bull of Heaven upon the men, but they make short work of him as well. Then Enkidu taunts Ishtar and flings bull shit in her face. Of course somebody must pay for this outrage, and we can pretty much rest assured it will be Enkidu, he of the lowly origin, and not Gilgamesh, who is the archetypal Campbellian hero and, improbably, two-thirds divine (don't ask me quite how). This is where the above quote comes in. Freaked out by his friend's death and confronting his own mortality, Gilgamesh spends the rest of the epic questing to discover the secret of eternal life. Does he find it? Well, you'll have to read it to find out.

[FYI: Utnapishtim is the model for the Biblical Noah and some say Gilgamesh is the model of the Homeric Odysseus.]

There is so much here (civilization and barbarism, gods and monsters, dreams and reality, war and alliance, class and status, ritual and quest, grief and mourning, etc., etc.), but for our purposes The Epic of Gilgamesh is a top candidate for being an actual, real-life Ur-story. Fact is, it pretty much speaks for itself.