Be Afraid. Be Very Afraid.

I'm a scuba diver. I've been diving for many years and seen lots of cool wildlife, large and small. One of the coolest things I ever saw, however, came while I was snorkeling just offshore from Providenciales, Turks and Caicos. We were swimming from one clump of coral to another in about 15-20 feet of water. I saw something moving near the bottom and grabbed my partner's fin. We stopped. Just below us was a squadron of Caribbean reef squid. There were nine of them in a straight-line formation. The two on the ends were the largest—I'd say 10-12 inches long. They had spotted us about the same time I spotted them and stopped swimming. We hovered above them. They hovered on the bottom, eyeing us with their large black eyes. We stayed in that spot about 20-25 minutes examining each other. 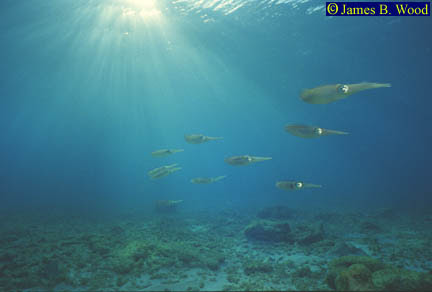 I'm not much of a free diver, but I was able to gulp enough air to get down near them several times. They watched me and knew what I was doing, but they let me get almost near enough to touch them. It was amazing. There was clearly intelligence here. But a very alien intelligence. My sense was that this was a family or a troop of some sort, maybe a school (sorry for the pun). The two larger squid on the ends changed colors and shapes almost simultaneously. Then the line did the same thing. At times, it was almost like seeing an electrical current pass through them. Then they would point their short tentacles like an arrow or open them. It was like they were taking the younger ones out for a field trip, showing them what to do in certain situations, how to capture food, etc. That may be projecting, but clearly, they were reacting to us and what we were doing and they were communicating among themselves in ways I could not immediately grasp. It was a close encounter of the third kind. Truly amazing. Eventually, I made one last pass down to where they hovered at the bottom and swam off. They swam off as well. I shall never forget it.

Now, this behemoth they're thawing out down New Zealand way, the one with the eye the size of a soccer ball. It is of the same basic species. It is intelligent, too. We don't know much about it. We don't understand its intelligence. However, this we know. It is down there. In the depths. Perhaps in squadrons. Cool, huh?

You can watch the whole defrosting thing here.
Posted by Jim H. at 12:27