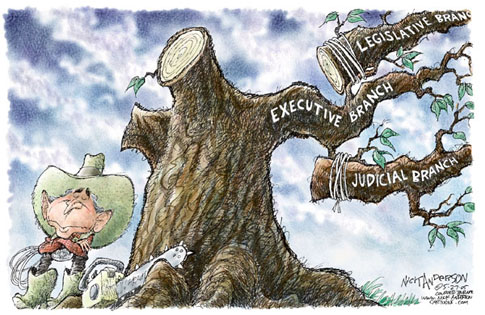 As you may or may not know, the United States had a mid-term political election yesterday. The office of the presidency was not up for grabs, but the entire House of Representatives, one-third of the Senate, numerous state governorships, and state legislatures were. It was an exercise in our particular form of democratic government in the normal course of things. And that's a good thing.

Today, there's a lot of hue and cry about the outcome and what it means for the future of this country and its two mainstream political parties. The Republican Party gained control of the House of Representatives. The Democratic Party retained control of the Senate—just barely.

None of the post-mortem coverage I've seen (and I'm open to correction), however, seems to grasp the full measure of the change the last two years has wrought on our political system.

Yes, there have been accomplishments by the Obama administration and the Democratic majority in Congress. And they are of debatable merit. Yes, the Republicans have reorganized as the minority party-in-opposition and seemed to have found new life. But analyzing yesterday's election results in terms of its effects on the two political parties misses the point.

As practically everyone of consequence acknowledges, this country—and quite possibly the world as a whole—narrowly missed slipping into another Great Depression as the presidency of George W. Bush stumbled to the finish line of its eight year incumbency. President Obama's supporters like to give him credit for averting this catastrophe, and there is some credibility to this argument. But it is a difficult thing to sell to the American electorate and clearly did not hold sway yesterday.

What goes unacknowledged by virtually everyone is the other crisis we averted in the wake of the Bush presidency: namely, the rise of the imperial presidency.

Let's start with some background. President Bush and, even more so, Vice President Cheney attempted to use the disastrous terrorist attacks of September 11, 2001, to expand the powers of the Executive to a practically unheard-of degree. They shoved the so-called PATRIOT Act through a rubber-stamp Republican majority Congress in the dead of night. They dictated legislation to their shills on any number of other occasions, and the Democratic minority did not act as a party-in-opposition. They were cowed into submission by calls of treason and cowardice and most likely blackmail by the minions of a self-declared 'War President'. They were bullied and conned into ceding to the Bush administration exclusive power to determine if this country should invade a bystander country. The Bush administration adventured into armed conflict by fiat. It spent billions of dollars on PR (Hill & Knowlton, anyone?) to trumpet its policies and bash its opponents—something to which, I might add, the Obama administration seems allergic. It populated the judicial benches with cronies and allies who adhered to its vision of virtually limitless executive power. It submitted deceptive budgets designed to foster its agenda and make it appear to be fiscally sound—its two 'wars' were, for example, specifically kept off-budget. The Bush administration co-opted legitimate journalists and pundits and used FoxNews as its communications arm, and it used threats of removing access to information from those in the mainstream press it couldn't co-opt if they criticized the president. It engaged in illegal warfare, torture, and further crimes against humanity and world order. It engaged in character assassination and political destruction of those who dared call attention to its lies (Valerie Plame, anyone?) and fraud.

This brief summary only begins to touch on the eight-year effort by President Bush to consolidate power in the Executive Branch of the U.S. government. The first six years of the Bush presidency, in particular, was characterized by the machinations of a shrewd political organization whose every move was calculated to enhance its party's dominance. The current president, by contrast, has not rammed its own legislative initiatives down the throat of Congress. Virtually all of the initiative has been ceded to Congress. And this is as it should be.

Our Constitution envisions three balanced branches of government. During the Republican Bush years, the balance tipped heavily in favor of the Executive branch. We have not seen such an imbalance since the times of FDR or Lincoln, legitimate war presidents. President Obama, by all indications, seems to working to restore the correct balance. It is a slow process. And a thankless one. It cannot help but make him seem weak. It does not "excite the base."

Yet, this is why this mid-term election is encouraging. Sure, the party I favor lost some seats. But that power shift is de minimis compared to the real shift in power we are seeing (or not seeing, as the case may be) between the Executive and the Legislative branches. Let the issues play out in Congress. That's the way our system is supposed to work. That's where we're supposed to fight it out. That's where true bottom-up change can come.

I think too many on the left want to counterbalance the strongman Bush with a strongman of their own. I believe that is wrongheaded. The stronger the presidency, the greater the tendency toward authoritarianism. Being a liberal, historically, means opposing a strong executive—in whatever form it takes: monarchy, feudalism, heriditary nobility, fascism, dictatorship, totalitarianism, religious establishmentarianism, etc. So, call me a liberal; just make sure you know what you're talking about when you do.

And yes, on that score, yesterday's election results were not all that bad. Historic turnout for mid-term elections just indicates that we are beginning to see a resurgence in the Legislative branch of government. And that means it's time to roll up your sleeves and get your representatives to do their job, i.e., representing your interests.
Posted by Jim H. at 15:57

Excellent point. Though one might quibble that Obama has retained some of the over-reaching powers assumed by Bush for the executive branch, even if he has been more abstemious in their use. Like the power to add signing statements to bills passed by Congress.

Can't say I disagree, Tom. Devolution of power is never a simple thing.

I believe I've spotted a trend that no one has yet remarked. I hope I'm right and that it's an ongoing, unfinished process. That, of course, remains to be seen.

Welcome, and thanks for your comment. I look forward to exploring your site.