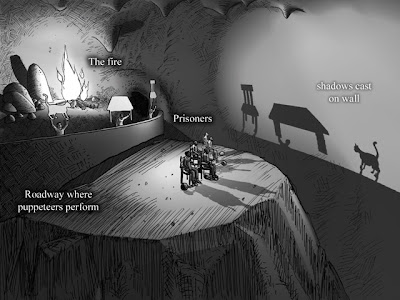 This post is the next in an ongoing series.

The fear of metaphor is of ancient provenance. If you'll recall, we left off with Plato, via his gnomic persona, Socrates, banishing poets—the employers of metaphors—from the deliberations of democracy because they appealed not to truth and reason but incited the desires and passions of the populace. Of course, Socrates is quick to say the reasonable man should "fear[] for the safety of the city which is within him [and] be on guard against her seductions." Hardly a rational riposte.

Indeed, this is not the only time Plato relies on affective language to get his point across. His metaphor of the cave is one of the great talking points in the history of philosophy:


[Socrates] And now, I said, let me show in a figure how far our nature is enlightened or unenlightened: --Behold! human beings living in a underground cave, which has a mouth open towards the light and reaching all along the cave; here they have been from their childhood, and have their legs and necks chained so that they cannot move, and can only see before them, being prevented by the chains from turning round their heads. Above and behind them a fire is blazing at a distance, and between the fire and the prisoners there is a raised way; and you will see, if you look, a low wall built along the way, like the screen which marionette players have in front of them, over which they show the puppets.

[Socrates] And do you see, I said, men passing along the wall carrying all sorts of vessels, and statues and figures of animals made of wood and stone and various materials, which appear over the wall? Some of them are talking, others silent.

[Glaucon] You have shown me a strange image, and they are strange prisoners.

[Socrates] Like ourselves, I replied; and they see only their own shadows, or the shadows of one another, which the fire throws on the opposite wall of the cave?

[Glaucon] True, he said; how could they see anything but the shadows if they were never allowed to move their heads?

[Socrates] And of the objects which are being carried in like manner they would only see the shadows?

[Socrates] And if they were able to converse with one another, would they not suppose that they were naming what was actually before them?

[Socrates] And suppose further that the prison had an echo which came from the other side, would they not be sure to fancy when one of the passers-by spoke that the voice which they heard came from the passing shadow?

[Glaucon] No question, he replied.

[Socrates] To them, I said, the truth would be literally nothing but the shadows of the images.

[Glaucon] That is certain.

Ironically, one of the most articulate men of his or any other generation—the man who banished the metaphoricists from The Republic—had himself to rely on a grand metaphor to express arguably his most seminal idea; to wit: that appearances are not reality and that the language we use to speak about those appearances is yet further removed from a true correspondence with reality.

Ideally, for Plato, political discourse should be grounded in reality and not simply appearances. But not all discourse is political, and, conceivably, not all metaphor is affective.

Email ThisBlogThis!Share to TwitterShare to FacebookShare to Pinterest
Labels: Fear of Metaphor

Jim! Either you're channeling Zizek, or he's channeling you (and Socrates). At the eight minute mark he says, “No ethnic cleansing without poetry.” http://www.youtube.com/watch?v=YIpiXJW3dYE&feature=player_embedded (Saw it at 3QD)