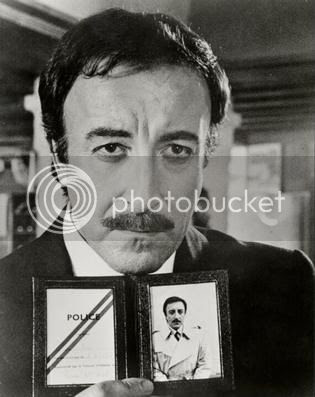 
The Erasers, by Alain Robbe-Grillet, consists of five chapters, a prologue, and an epilogue. The ostensible structure is much like a classic tragedy, and much has been made of the novel's debt to Oedipus.

(This novel is over a half-century old, so I will assume you've had a chance to read it. That is to say, what follows will be chock-a-block with spoilers. That being said, it's important to note that The Erasers is one of those novels that requires multiple readings; a knowledge of the ending informs the (re-)reading of the text.)

The book begins and ends in the Cafe des Allies with and from the point of view of the manager:


"In the dimness of the cafe, the manager is arranging the tables and chairs, the ashtrays, the siphons of soda water; it is six in the morning.

He has no need to see distinctly, he does not even know what he is doing. He is still asleep. Very ancient laws rule every detail of his gestures, saved for once from the uncertainty of human intentions; each second marks a pure movement: a side-step, the chair eleven inches out from the table, three wipes of the rag, half-turn to the right, two steps forward, each second marks, perfect even, unblurred. Thirty-one. Thirty-two. Thirty-three. Thirty-four. Thirty-five. Thirty-six. Thirty-seven. Each second in its exact place.

Soon unfortunately time will no longer be master. Wrapped in their aura of doubt and error, this day's events, however insignificant they may be, will in a few seconds begin their task, gradually encroaching upon the ideal order, cunningly introducing an occasional inversion, a discrepancy, a confusion, a warp, in order to accomplish their work: a day in early winter without plan, without direction, incomprehensible and monstrous." (7)

'Oh, it was you! You're the one who told that nonsense about the fictitious son of Professor Dupont.?'

'I didn't say anything.'

'I don't even know whether he had any. All I said was that young people of all ages came in here.'

'You're the one who told that nonsense, or was it the manager?'

'You're the one, young people nonsense, professor at the bar?'

'All right. Let me certainly have a son, a long time ago, fictitious young died so strangely. ...'

In the troubled water of the aquarium, furtive shadows pass. The manager is motionless at his post. His massive body leans on his outspread arms; his hands grip the edge of the bar; his head hangs down, almost threatening, the mouth somewhat twisted, the gaze blank. Around him the familiar specters dance their waltz, like moths circling a lampshade and bumping into it, like dust in the sun, like little boats lost at sea, lulling to the sea's rhythm their delicate cargo, the old casks, the dead fish, the rigging, and tackle, the buoys, the stale bread, the knives and the men." (256)

From those two snippets we can pretty much derive the theoretical sense of the novel.

Roland Barthes pronounced "The Death of the Author" in 1967, but here, a decade earlier, Robbe-Grillet relegates him to a sideline role. The manager opens and closes the text. In effect he embodies R-G's conception of the author: he doesn't give meaning to the story, but he sets the table and allows things to happen, permitting meaning to come forward.

This circularity—beginning and ending with the manager of the Cafe—is a thematic artifice of the story (to which I shall return), though the plot unfolds linearly over the course of roughly twenty-four hours.

The outline of the plot is uncomplicated, reasonably standard for a crime novel: Wallas, an investigator with the Ministry of the Interior, arrives in an unnamed, but atmospheric Northern European town to investigate reports of the murder of a professor of political economics named Daniel Dumont which may or may not have been part of an ongoing series of murders—or assassinations—of a political nature around the country. Wallas strolls the streets of the town which seems vaguely familiar to him seeking clues and interviewing people with knowledge of the alleged crime.

What's complicated is the telling of the story: R-G does not use a central, omniscient voice. Nor does he employ a single point-of-view character with whom the reader can identify. The story, rather, is told from multiple, fragmented points of view, each with partial knowledge of the facts, and none of whom has the entire picture.

The reader is called upon to put the puzzle together for herself. At times it is not readily evident in whose POV a given section is being presented. Further, the various POVs speculate about what might or might not have transpired, so that the reader thinks she is being given an authorial truth only to discover later on that she is not. This is the source of much confusion among readers who are forced by R-G to work to sort out facts from speculation and determine whose POV is being represented and what is the state of their rather imperfect knowledge.

Further complicating matters is R-G's attempt to play around with the genre rules. Contra Todorov: The Erasers does not begin with a real murder and ends without an identification of the culprit. By my count, R-G violates at least twelve of van Dine's Twenty Rules: 1 (reader has a better opportunity to suss out the crime), 4 (the detective discovers that he ultimately is the culprit),6 (the detective does not solve anything), 7 (no corpse), 9 (two detectives working independently), 10 (the culprit of the alleged murder that sets off the action is a bumbling servant), 13 (a secret cabal remains undiscovered), 15 (truth is never really apparent), 16 (much of the book is given over to description of atmospheric street scenes), 17 (professional criminals committed the alleged murder), 18 (the real crime here is an accident, a mistake, and has nothing to do with the plot other than to close it), 19 (there are no motives, as implied by the manager's prologue).

Email ThisBlogThis!Share to TwitterShare to FacebookShare to Pinterest
Labels: Robbe-Grillet, The Erasers, Ur-story

Mon dieu, Brother Jim! I see you've been having some rainy nachts in Georgia. Foggy, too?

Despite the alarming frequency of the atypical solecisms (Please believe me, I was not on a nit hunt! Besides, manger in an Ur story does have a certain je ne sais quoi; as does Dumont in this instance―any relation to Margaret?) I've got to hand it to you, like a lovely salade composée on a perfectly polished heirloom platter, A Shot in the Dark―Part Deux is an engaging, if somewhat off-the-mark, post.

First off, while I absolutely agree that The Erasers requires "multiple" readings, reluctantly, I must balk at the implicit suggestion that it also requires "actual" re-reading. Democratically (as is every reader's right), I stake a claim on R-G's behalf that it is the very genius of this work's construction that one "re-reads" this novel as one goes. Isn't that part and parcel of the essential newness of this remarkable submission to the nouveau? Reflection, contemplation? Bien sur―every excellent novel's mandate. But re-reading as a requirement and not a choice? Non, mon frere.

Your take on Rule No. 7 is, I'm afraid, dead wrong, and not merely technically (although nowhere is it written that the corpse must appear at the inception of the book. Well before the last page of The Erasers is turned―voilà, habeas corpus.) But the WHEN the corpse, and the crime it personified, become apparent is R-G's alpha and omega point.

11 and 12 are dicey, very dicey, too, and not because of the trap of reading "servant" in a class-bound, anachronistic way, but, rather, close-mindedly. Wallas, by virtue of his employment in a governmental agency, is a kind of servant―a public one, and one with a high rank and distinguished career with its own inherent imperative to service. Plus, R-G is definitely playing with how fallible humans compartmentalize disparate aspects of themselves at their own peril. That he does so without even a trace of facile moralizing is to his immense and inordinate credit.

I could go on and on, but honestly I think following Marche, even to disprove the worth of his false beliefs and judgments, is something of a waste of time―he's such a trifling, small urchin at the bottom of the sea (probably why DG didn't bother with it himself). What person of any sensitivity and intelligence could possibly read this astonishingly meritorious debut novel without the utmost admiration for its “shock and awe” value in a morally numbed-out post-Holocaust France? Robbe-Grillet's approach is ALL, and all the worthier for its sheer lack of mundanity.

That a hubristic, bloviating lowlife like Marche would turn a willfully blind eye to Robbe-Grillet, on the occasion of his death no less, for some sicko-sensationalist, self-promoting agenda of his own―and what exactly was he attempting to subliminally flog, again? His own work or a colleague's? (I suspect if one cared to do the close reading it might prove itself to be the final and fatal piece in a kind of totally damning pattern completion.) I forget, please excuse me―should come as no surprise. Not in a world where, for example, there are gift shop kiosks at Auschwitz and Buchenwald.

There are such people, Jim. They do exist.

Let's hit the high points. You strike paydirt w/r/t 're-reading'; yet the point remains: many clues and subtleties may (will) elude the first-time-through reader, their significance becoming clearer (less foggy) only on the second go-round.

Rule 7's letter may not have been violated (corpse at the end rather than the start), but its van Dinean spirit most assuredly was. Not worth the quibble, really. It's a neat play on the expected by R-G. Credit.

I wrestled with 11 & 12. Since there was no murder to begin with, how could a servant be the culprit? vD is railing against the old 'the butler did it' cliche. Fine. And, yes, Garinati is Bona's boy—and neither is sufficiently developed to achieve our interest as villain. But that's beside the point because we're speaking here of the alleged crime—the botched one—which sets the investigation in motion, not the killing at the end. There really was no per se culprit. Your brilliant take on Wallas as civil servant, however, must certainly be incorporated into any further iteration of the points. A take, I might add, that completely eluded me on first reading. Ta.

As for the grammatical faux pas, your mercy endures forever.

Again, for a careful and knowledgeable reading of my effort with The Erasers, I am in your debt. Thanks,

Oh man,
Sometimes with me it's one step forward and two back. I don't mean to impose but I've got myself in something of a jam over at 3QD. If you look, you'll detect what I mean at once. http://www.3quarksdaily.com/3quarksdaily/2010/06/mind-over-mass-media.html
Anyway, it's starting to feel like one of those lesbian prison movies, the kind without Simone Signoret, if you get my drift.

If you can offer a diplomatic Jim H-ism, it would be a help. If not, and you run into Toast, please (and I NEVER thought I'd hear myself typing these words) send him over, Red Rover, Red Rover. Thanks, Big Guy!