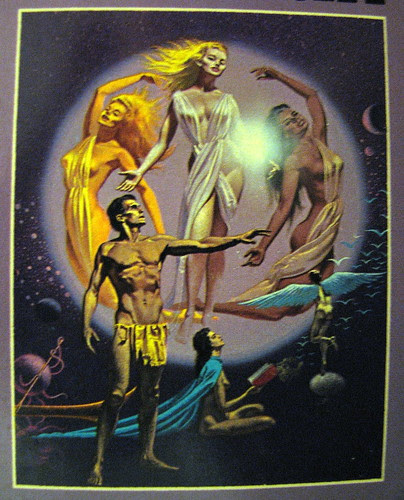 "All that implies Titan is a dynamic place where organic chemistry is happening now."

Maybe there is some hope! Evidence appears to imply that a methane-based life form may be active on Saturn's moon Titan. How cool is that?

"Everyone now knows how to find the meaning of life within himself.

But mankind wasn't always so lucky. Less than a century ago men and women did not have easy access to the puzzle boxes within them.

They could not name even one of the fifty-three portals to the soul.

Mankind, ignorant of the truths that lie within every human being, looked outward—pushed ever outward. What mankind hoped to learn in its outward push was who was actually in charge of all creation, and what all creation was all about.

Mankind flung its advance agents ever outward, ever outward. Eventually it flung them out into space, into the colorless, tasteless, weightless sea of outwardness without end.

These unhappy agents found what had already been found in abundance on Earth—a nightmare of meaninglessness without end. The bounties of space, of infinite outwardness, were three: empty heroics, low comedy, and pointless death.

Only inwardness remained to be explored.

This was the beginning of goodness and wisdom.

What were people like in olden times, with their souls as yet unexplored?

The following is a true story from the Nightmare Ages, falling roughly, give or take a few years, between the Second World War and the Third Great Depression."

"Everybody's happy there forever," said Stony, "or as long as the bloody Universe holds together. Get in, Unk. Beatrice is already there, waiting for you."

"Beatrice?" said Unk, getting into the space ship.

Stony closed the airlocks, pressed the on button.

"We're—we're going to Paradise now?" said Constant. "I—I'm going to get into Paradise?"

"Don't ask me why, old sport," said Stony, "but somebody up there likes you."

Kurt Vonnegut, The Sirens of Titan

Email ThisBlogThis!Share to TwitterShare to FacebookShare to Pinterest
Labels: life on other worlds, Titan

Jim,
I'm reading Vanishing Point by David Markson and what do I see on page 79?

"Practically all those interviewed in the aftermath of the Word Trade Center disaster agreed that they had never confronted anything more horrendous.

Author's curiosity as to whether anyone thought to inquire of the writer of Slaughterhouse-Five."