No, no, no. Not that one. That's Sen. Arlen "Single Bullet Theory" Specter (D-PA) who's just announced he's switching parties from the GOP to the Dems, sending shock waves through the U.S. Senate and the Republican Party.

I'm talking about shock waves sent out by an exploding star even older than Himiko, which I blogged about the other day. Through some phenomenal bit of luck, astronomers have managed to capture an image of a ten-second gamma-ray burst from a star estimated to be about thirty times larger than our own sun. They estimate the event to have occurred more than thirteen billion years ago when the universe was only about 630 million years old. Seriously, what do you think the odds are of capturing such a distant event? I find it hard to imagine.

You can read more about it here and here. Here's a pic:

Here's another, close up 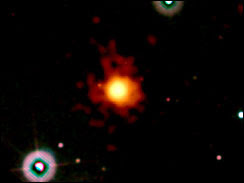 I'm sure we'll learn more about it as time goes on, which is more than I can say for that theory of Specter's, I'm afraid.
Posted by Jim H. at 13:13

Email ThisBlogThis!Share to TwitterShare to FacebookShare to Pinterest
Labels: Cosmology