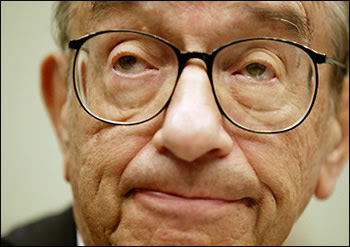 On Thursday October 23, 2008, former Chair of the Federal Reserve, Alan Greenspan, testified before Congress. In that testimony, under questioning from Rep. Henry Waxman (D-MI) he stated:

You had the authority to prevent irresponsible lending practices that led to the subprime mortgage crisis. You were advised to do so by many others. And now our whole economy is paying its price.

Do you feel that your ideology pushed you to make decisions that you wish you had not made?

ALAN GREENSPAN: Well, remember that what an ideology is, is a conceptual framework with the way people deal with reality. Everyone has one. You have to -- to exist, you need an ideology. The question is whether it is accurate or not.

And what I'm saying to you is, yes, I found a flaw. I don't know how significant or permanent it is, but I've been very distressed by that fact.

REP. HENRY WAXMAN: You found a flaw in the reality...

ALAN GREENSPAN: Flaw in the model that I perceived is the critical functioning structure that defines how the world works, so to speak.

REP. HENRY WAXMAN: In other words, you found that your view of the world, your ideology, was not right, it was not working?

ALAN GREENSPAN: That is -- precisely. No, that's precisely the reason I was shocked, because I had been going for 40 years or more with very considerable evidence that it was working exceptionally well.

The news media has seized on this and expressed shock that Methuselah—I mean, Greenspan—could be so candid in admitting fault. For years Mr. Greenspan's word alone was sufficient to sway Congress not to impose regulations on complex financial transactions, to worry about non-existant inflation, not to worry about deficits, etc. He was treated with the greatest deference, even when he spoke a vague, gobbledy-gook economics jargon that few Congress members or members of the press could understand. Much media time and labor was spent trying to parse his words.

To me, this admission of fault is not the most shocking aspect of this piece of testimony. What is astonishing is his absolute faith in ideology. He isn't saying that having an ideology is wrong; he is saying that his own ideological framework needs to be tweaked.

An ideology in the soft sciences (the social sciences like sociology, poli-sci, economics, psychology) is more like a literary theory or a theology than a theory in the hard sciences. It is a belief in the absolute ability of an abstraction to explain actual facts and the subsequent attempt to explain, or reconcile, all observable facts in terms of its principles and axioms. Where the facts don't fit, they can be changed (recast, spun, revisioned, ignored) to suit the ideology. Facts in the soft sciences are squishy, themselves open to interpretation. Faith in an ideology is thus easily justified. Reified. Moreover, there is a recursive (or cybernetic) quality to soft facts: they are subject to feedback. And if, as in Greenspan's case, the ideologue is in such a position of power to shape events, results can be altered, data controlled, information limited (positive results trumpeted, negative results buried, distorted, or actually concealed) to make it seem the ideology is correct. The purpose for this, of course, is to increase the power of the ideologue; for once the ideologue admits failure of the ideology, then there is no further need for the ideologue. That is why these guys never admit mistakes, or even question their own assumptions, when they are in office. Never underestimate the power of self-delusion among the ideologues—whether it be religionists or atheists, post-modern identity politics literary critics, free-market economists, Marxist historicists, neo-con political scientists—especially when they have the power to influence the results.

Greenspan's 'come-to-Jesus' moment before Congress is remarkable, then, for a number of reasons. He admits to being in the thrall of an ideology(!), pronounces it flawed and in need of tweaking(!), but does not concede that life can—and perhaps should—go on in the absence of such. In fact, he claims an ideology is necessary to life. If truth is subject to the dicta of ideology (especially a self-reifying, self-delusional ideology), then expect disaster, or at least crisis, when reality intrudes. In an analogous context, Freud refers to the return of the repressed in the psyche of the individual. An earlier writer likewise noted:

Nay, indeed, if you had your eyes, you might fail of
the knowing me: it is a wise father that knows his
own child. Well, old man, I will tell you news of
your son: give me your blessing: truth will come
to light; murder cannot be hid long; a man's son
may, but at the length truth will out.
Shakespeare, The Merchant of Venice, 1600:

Maybe it is my training in philosophy, but, to me, truth is an absolute value, not part of a value system or subject to some ideology. Understanding reality, getting it right to the best of my limited ability, is crucial to life, not trying to form fit facts into some mental construct or "conceptual framework" (which may or may not be misguided). Truth is never, as some claim, obvious. One of the most powerful men of our age, one of its wisest according to conventional wisdom, has just admitted to living his life under the influence of an ideology and allowing it to color his judgments—judgments that have had enormous real-world consequences for us all. And, from my point of view, he is unrepentant in his abject dependence on his delusions.
Posted by Jim H. at 13:05