No, Not that James Woods 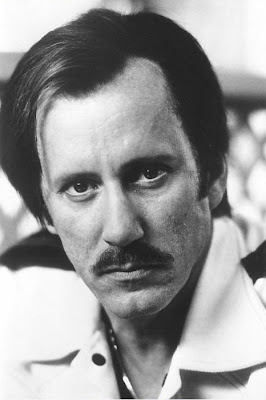 Disambiguation. A good word I learned, frankly, from Wikipedia.

The other James Wood (no 's') gives a close analysis of the free indirect style in a passage from Henry James's What Maisie Knew. He focuses on one word in one passage that shows James's true mastery; that is to say, he shows us how James steps back and allows us to see the scene through the eyes of Maisie through the use of one perfectly-modulated word: embarrassingly. [Of course, you can hear the chorus of MFA students bellowing in the background about the use of -ly adverbs.] Wood then traces the use of this technique back, interestingly, to the mock-heroic poetry of Alexander Pope. All he is really saying is: the writer needs to stand back and let the language reflect the character's own POV. The writer's style interferes with our being able to see the world through the eyes of the characters. With any given word or phrase or literary device, as a writer, ask yourself: "Is this my character speaking or am I intruding?" Call it "method writing"—after so-called method acting. The greater artistry, Wood is telling us, comes in getting the characters just right.

Now, what's fun about Wood's first chapter, called "Narrating", is his delicious take on other writers. He takes Updike to task for grievous authorial interference (or, offsides in soccer jargon) in Terrorist. He takes a first run at Nabokov, in Pnin saying: " Nabokov is here using a kind of free indirect style, probably without even thinking about it." I guess VN got lucky, huh? Wood notes how Faulkner's, Joyce's, and Shakespeare's characters all manage to sound like Faulkner, Joyce, and Shakespeare respectively.

But then, then my friends, he breaks out the stiletto: "David Foster Wallace is very good at becoming the whole of boredom." Pow! Do you get the feeling he doesn't particularly care for DFW? Wood praises Chekhov's use of what he calls the unidentified free indirect style, or the "village chorus." Then, he shows how Wallace takes that style to extremes in imitating the jargon and mangled lingo of Madison Avenue. Wallace's predecessors, he notes, include Dreiser, Sinclair Lewis, Pynchon, and DeLillo who let the "debased" language of the contemporary American idiom debase their own language. His point is a good one. There really is a balancing act, let's call it 'artistry', involved. But, then, Wood really drives the point through the heart of DFW. And twists.

In concluding this section, Wood gets it just right, I think:

So the novelist is always working with at least three languages. There is the author's own language, style, perceptual equipment, and so on; there is the character's presumed language, style, perceptual equipment, and so on; and there is what we could call the language of the world—the language which fiction inherits before it gets to turn it into novelistic style, the language of daily speech, of newspapers, of offices, of advertising, of the blogosphere and text messaging.

In essence, the novelist is a bit of a juggler. The balancing act is to keep these three balls (if you will) of language in the air simultaneously. Writers often talk about getting the words just right. Wood provides the matrix, or context, in which we can locate this rightness.
Posted by Jim H. at 12:33

"...he shows us how James steps back and allows us to see the scene through the eyes of Maisie through the use of one perfectly-modulated word: embarrassingly."

It's to Wood's credit that he manages to apprehend, so well, our modern longing for revelation that he shows no trepidation in asserting both the roundness of circles and the wetness of water, presenting this information, with a showman's flourish, as news.

What he misses, on the other hand, is the *reader's consent* as the key ingredient to the writer's ability to achieve any effect; when an Updike or DeLillo violates Wood's romantic notion of a narrative language consonant with a character's "true" relation to the narrative, it's to the *delight* of the reader who no longer cares to defer to the conventions of the form; who can no longer "suspend" that "disbelief"... who can hear the pulleys squeaking and the extras chatting offstage and no longer chooses to pretend otherwise. Wood seems to advocate (or long for) a kind of innocence in reading that writers like Calvino or Kundera (outside the field of Anglo-American dreaminess) could only smirk at.

Is Wood willing an intellectual Ice Age on us? He might as well call for the burning of Cubist Paintings... like the novelist one would think Wood would have more praise for, that master of character-appropriate stream-of-consciousness, Tom Wolfe.

Wolfe's fiction oeuvre is nearly the Platonic model of the aesthetic Wood advocates. Why does Wood dismiss Wolfe? Because Wolfe's minor art is the perfect refutation of Wood's fallacy. Down to the icecream suit...

Well said, steven augustine. I especially like your use of the words 'romantic' and 'innocence' Philosophically, I read Wood as contrary to someone like Wm. Gass for whom there is nothing outside the language. The artistry is all. I think, too, of R. Barthes's likening of fiction to a castrated sign, i.e., signifier without the signified. His S/Z is classic.

There does appear to be some 'reality' beyond the text for Wood. Is it character or some concept of character that doesn't envision character as residing in or even needing a physical body? We'll have to read on to see. I am still formulating my thoughts, but trying to give him a thorough read.

Thanks for stopping by! "Our modern longing for revelation" I will continue to ponder.

I tend to agree with Steven on Wolfe. Despite the caricatures and exclamations marks, his Bonfire of the Vanities is laugh out loud satisfying.

True we can't turn the clock back. There is no tooth fairy, but this doesn't mean that we can't experience sublime escape. Wood is right when he describes the conditions under which this is possible.

I tend to disagree about Wolfe. Granted, Wolfe's characters are flat but vivid—something Wood appreciates. But, to my mind, his characters' voices are too explicit. Wolfe leaves us with nothing to ponder with respect to their (limited) inner lives. Analogously: Wolfe is like a pre-Gordon Lish Raymond Carver. He doesn't know what to leave out, or why.

Re: Cubism. Wood is making a rear-guard claim for fictional realism, mainly with respect to character. As a practical matter, his criticism carries weight—more so in GB than here. Fiction in the US is too diverse to knuckle under to his particular view. The tradition of non-realism, surrealism, hyperrealism here is simply too strong. Besides, I'm not sure how he's received in academia where such things are often decided. I know, for example, Harold Bloom adores DeLillo and Pynchon and, speaking of cubism, Heller's Catch-22.

Having once referred to Tom Wolfe as the "Colonel Sanders of plot", my reference to him in the above comment wasn't praise, in any form. I think it's quite funny that Wood can't bring himself to admit that Wolfe is very nearly the perfect novelist, by Wood's own retrograde criteria.

Also, surely you've misread my Cubism remark? The last thing I want is to "turn back the clock"... it was already painfully slow for a few decades until the jolt of 9/11 effectively stopped it. A little progress would be most welcome at this point; the last things we need now are endless pastiches of Henry James.

Yes, and what we need now are not flashily conservative critics popularizing a higher kind of phillistinism... but boldly talented novelists to remind us of the wonders possible when we privilege, rather than chastise, the imagination.

The last place I expect (or desire) to bump up against the limits of everyday's "realism" is in a novel. Wood is welcome to the richness of the banalities his narrow purview is bound to call forth, but I (and a few others) prefer my fiction a bit wilder; more challenging. It may come as a surprise to you that I care far less to know what "Maisie knew" than what she couldn't possibly have dreamt of.

If the rest of the Fine Arts were as burka'd as Wood would like to see Literature be, we'd all be dancing to waltzes and debating the pros and cons of James Whistler.

Wood is stylistically interesting as an *interpreter* of texts, but his overall argument is structurally weak (when it isn't self-servingly protean)...and, philosophically, of a piece with a fairly loathsome era. I only hope I manage to outlive it!

Yours in the Limitless Possibilities of the Arts,

"surely you've misread my Cubism remark? The last thing I want is to "turn back the clock"..."

"Is Wood willing an intellectual Ice Age on us? He might as well call for the burning of Cubist Paintings..."

The way I read these remarks Steven is that you are saying that Wood's wish for innocent reading is impossible. Cubism occurred. Pandora 's box is open. One cannot go back...What I'm arguing is that it's not impossible. I think Wood correctly identifies what makes a novel great. In order to experience this greatness the reader must consent to suspend disbelief. It's a matter of choice. You apparently gain more pleasure from rational analysis than from emotional involvement.

I expand on this a bit over at my site.