I was fortunate enough to have the chance to spend an afternoon at the Louvre. I chose to explore the Renaissance painting wings—Southern and Northern. So much is made of the supposed 'warmth' of the Italian art of the period. I couldn't disagree more. Practically every painting had for its subject matter gods or angels or bible stories or mythic tales—high-falutin' big shots and such. Focus was on formal beauty—line, color, structure. Most were brilliant and bright. The paintings of the Dutch & Flemish artists of the same period were, indeed, darker in tone. They took for their themes, though, still and active lives. Portraits of real people showed them with rumpled noses and warts, fat and ugly. There were plates of eaten food. Parties with, apparently, plenty of libations. Hunting and fishing. Folks with pets. And, mirabile dictu, there were even paintings of people actually smiling. Smiling. Nary a single smile in all of Renaissance Italian painting. Nary a wart. You tell me which is warmer.

Three things in England were ruined for me by the pernicious effects of American pop culture.

Stonehenge was forever ruined for me by this [as was, of course, Led Zep]:

I took tons of pics there, but this is by far the best—a Druid stone if there ever was one: 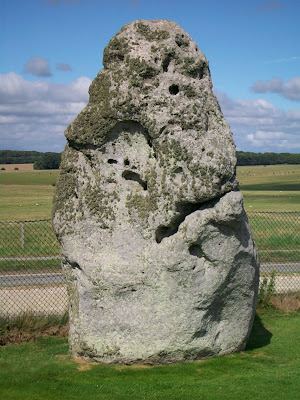 At the British Museum, this guy: 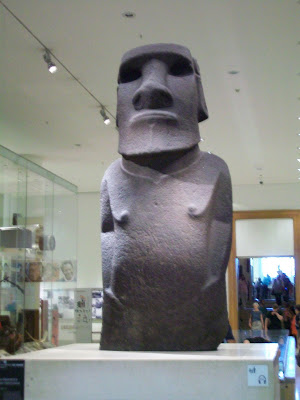 was ruined by the "Dum Dum give me gum gum" talking Easter Island head in "Night at the Museum" (starring Ben Stiller) to which movie I was contractually obligated as a father to take certain of my brood by virtue of having been a member of the Natural History Museum in New York. When the kids were little, we lived about a mile from the museum and would go on Friday evenings after the tourists cleared out and let the kids flow from room to room for hours. If you don't know what I'm talking about, good on you. You might be able to find clips on the internet; I couldn't.

Then there was this: 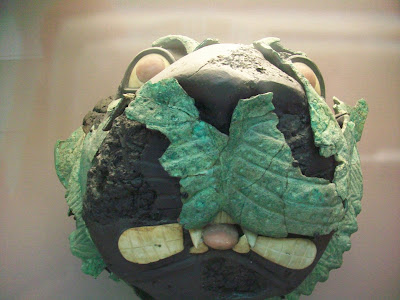 Wisdoc and I walked into the the British Museum gallery where two of these patinaed bronze Snagglepuss lions preside. My eye was immediately drawn to them. I said something like "Look honey, aren't those lions amazing. There's something importantly familiar about them, but I don't remember what. I don't know where I've seen them before."

Well, I remember now. BDR put it up at his estimable site after his visit there. The suggestion was planted.

Thus, for ruining (heh!) my British Museum afternoon, the gauntlet: What uber-important world historical artifact(s) are these two cats staring at? [Hint: if you know my site at all, you'll know it's of central significance to me.] Shots of Balvenie or other connoisseur-quality Scotch ride on the answer. Anyone, of course, can weigh in, and I'll make good when we meet.
Posted by Jim H. at 21:51

How could Stonehenge be anything but amplified in cool by Messrs. St. Hubbins, Tufnel & Smalls?