Just returned from visiting my eldest in the Keys. His birthday. Stopping over for a day before heading to T'giving in NC with the fam. Brought back some pics for your holiday enjoyment. 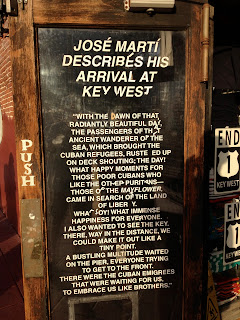 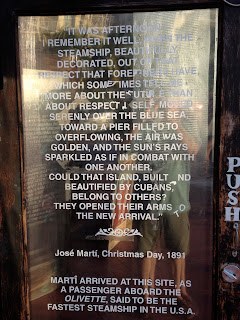 I apologize, upfront, to (all three of) my readers for being AWOB lately. I could chalk it up to lots of things: despair, other-busyness, distraction, running/training, creativity—but I won't (even tho' I just did). And I will not be posting anything until, probably, after Thanksgiving. I'm going down to the Keys to visit and dive with Wisdomie who's now a Dive Master/Dive Instructor. Dude's applying for jobs everywhere from Fiji to Oz to the Seychelles to the Caribbean. Wish I'd had that sort of sense of adventure and passion when I was his age. Way to go! Happy Birthday, Son!

Here, then, in no particular order, epigrammatic-ish thoughts that probably should've and most likely would've turned into probably interminable longish posts were I not [see above, pick one or more]. Lucky y'all:

Pay Close Attention: The BIG GAME is Iran. I said it when we went into Iraq and Afghanistan. I said if I were Iran I'd be worried. Don't believe me? Ever play Risk? We're surrounding them. Strategery, bitches. The drumbeats are starting, faintly, at first, in the distance, but they're beginning the banging. Listen. Can you hear them? And, you might well ask, why? Choking China's supply line of oil. Oh, and now we're setting up shop in Oz.

re: Occupy: The coordinated assault by Bloomberg and 17 other mayors (in collaboration with DHS) against all the DFHs will only serve to galvanize the disaffected. Especially when the world sees tiny Asian girls attacking the billy sticks of uniformed helmeted giants with her ribcage and grannies being gassed. Who didn't see that coming? Our best and brightest, apparently. Ever hear of Bull Connor and his famous puppy parties with slip-'n'-slides? Oh yeah, and when Labor Leaders and retired hero cops lead the charge to the hoosegow, you know roots are taking hold. It gives me hope.

This, by someone calling themselves Ministry of Truth @ dKos (also Jesse LaGreca), makes some sense to me: Welcome to Phase 2 of OWS


"The point of Occupy Wall Street is NOT to camp in tents, it is to challenge power and corruption.

"And now that our tents are going away I am almost relieved. The tents were becoming a distraction anyway, now it is time for us to focus on how we will place pressure on the corrupt power structure and demand the changes and reforms and accountability we all know is absolutely necessary if we are going to have a viable future for millions upon millions of working class people."

Politics: Being presently domiciled in the State of Georgia, it is incumbent upon me to concede that two of the top contenders for the Republican nomination for President of these here United States also hail from here. Newt Gingrich is a mean person, dismissive, condescending. He's smart and informed. He lies; it is his SOP: his MO. And he's corrupt beyond measure. Herman Cain is ill-informed, misguided, and unserious. The only reason he isn't corrupt is that he hasn't had the opportunity yet. He's a salesman who's in it for the main chance. Another conman.

Look, if you can call me anything, you can call me a rational humanist. Looking at the Republican field, I despair. The one rational-seeming candidate, Jon Huntsman, can't get more than 2% support. He's a conservative. Fine. I don't have to agree with everything every candidate believes in. He's smart, informed, reasoned, relatively humane, and seems to have the country's best interests at heart. I don't get the sense he's corruptible—beyond the norm. In fact, probably significantly less. He's got for-real foreign policy experience. He's been the governor of a bona fide U.S. state. What's the problem with those guys? Why can't he get a hearing? Only the clowns, crooks, conmen, nincompoops, and ideologues seem to be able to get any serious attention from that base. It makes me deeply sad.

Personal aside: The last two weeks I've run two 5k (3.1 miles) races. I took a 1st in one and a 2nd place in the other in my age group. They're shorter distances, I know, but it's early season. I finished in the top half of all participants in both—besting many younger men and women. And yes, I'm still running in my Vibram Five Fingers—that's over 2 years and nearly 1,000 miles (see Running label below). And yes, I'm still injury-free. And yes, I've upped my barefoot training miles to roughly a third of my overall training miles. Did you see Chris McDougall's piece in last Sunday's NYTimes? Or this video about how to do it: The Lost Secret of Running?

Check out friend Justin's blog re same. It's never too late!

Best wishes to all for Thanksgiving!

All ye Druids gather 'round. Today is a glorious day! The leaves of the ginkgo biloba trees here in the ATL are falling. You may be unaware, but every year the leaves of this majestic tree all fall in a single day. They hold on and hold on then, practically all at once, at some unknown signal, they all let go at the same time.

For the last 11 years, I have walked, run, and driven by a magnificent specimen ginkgo in my neighborhood. And every year I've looked forward to this day. This year, for the first time, I've taken some before and during pics to document the event. 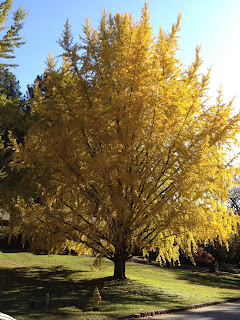 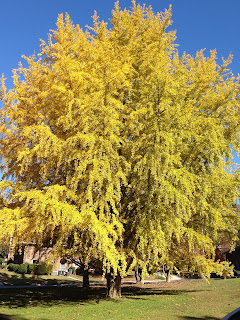 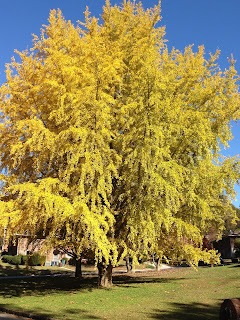 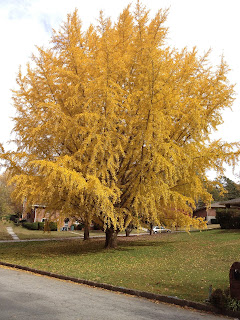 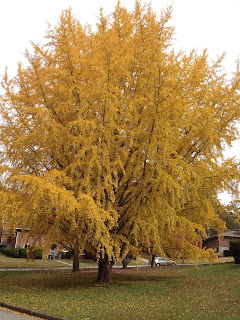 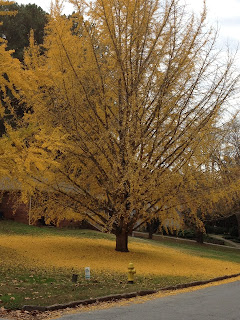 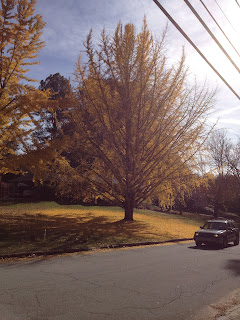 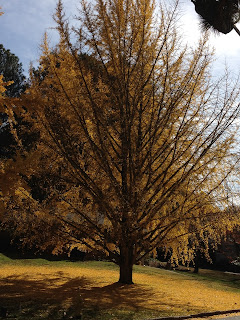 BY HOWARD NEMEROV
Late in November, on a single night
Not even near to freezing, the ginkgo trees
That stand along the walk drop all their leaves
In one consent, and neither to rain nor to wind
But as though to time alone: the golden and green
Leaves litter the lawn today, that yesterday
Had spread aloft their fluttering fans of light.
What signal from the stars? What senses took it in?
What in those wooden motives so decided
To strike their leaves, to down their leaves,
Rebellion or surrender? and if this
Can happen thus, what race shall be exempt?
What use to learn the lessons taught by time.
If a star at any time may tell us: Now.
Howard Nemerov, “The Consent” from The Collected Poems of Howard Nemerov. Copyright © 1977 by Howard Nemerov. Reprinted by permission of Margaret  Nemerov.
Posted by Jim H. at 17:40 3 comments:

Look What Those DFHs Down at OWS Are Doing Now!

Oh, wait. Never mind: that chaos, violence, and looting was just some college students who are upset their iconic football coach got caught covering up pedophilia by one of his assistants. [Kinda' like the Catholic Church.]

No jazz hands here. Where's the outrage on the right? Where're the tear gas and rubber bullets from the cops?

Sexual Harassment in the Workplace

Now, shut up and play your [sublime] guitar:

Okay, I've been quiet lately (@if: nothing to do w/ RG, but thanks), but it took this to bring me out for a quickie post: Did you know that Herman Cain is a Pokemon master?

The most awesomest video ever: