Jökulsárlón was the highlight among highlights of our trek around the island nation of Iceland. Once again, if you ever have a chance to visit, it's a doable day trip from the capital city of Reykjavik. We spent about five hours there, and I could've stayed much longer. It may be unique in all the world. It was something akin to a spiritual experience. The light that day seemed to emit from the icebergs in shades of aqua that were otherworldly.

But, moving on. On Day 9 we also saw several banks of thousands of wild swans in the ocean at the foot of the fjords (sorry, no pics worth showing) as well a circus of hundreds of swooping diving puffins on the cliffs in Vik. We stopped for dinner at a cafeteria at Skaftafell National Park and were going to make camp there but decided to push on to Vik. Again, it was one of those choices where neither option was wrong. We simply didn't have time for everything we wanted to do. So we passed up the magnificent hikes and sites at Skaftafell. Next time!

Vik is a small town on the southern coast. It is famous for its enormous black sand beaches and puffin cliffs. The campsite sits on a bluff overlooking the Atlantic at the foot of some soft, grassy cliffs. We arrived around 9:00 pm and still had time for a hike along the shore during the long, long twilight. That's when we saw the puffins for the first time. They were coming in for the night after a long day of fishing. Unlike in the Westfjords where you have to edge out over the cliff top, here you stand at the bottom of the cliffs and the puffins swarm over head and settle into their cliffside nests. It's quite a show! And because this is farther south, they hadn't yet begun their winter migration.

The next day, after a brief hike back to the cliffs to enjoy the puffin show in the light of day as they head out to sea, we drove to the airport at Keflavik along the southern coast. We stopped at two magnificent waterfalls, Skógafoss and Seljalandsfoss where we hiked around a bit, then drove through the barren eastern lava wastes to the airport, avoiding the capital. We spent the night at a Bed and Breakfast which we'd booked ahead of time in the old U.S. Air Force barracks about a 10 minute drive from the airport. Note: it runs an hourly shuttle.

I drove into the airport car rental place at 4:55 pm. The van was due back at 5:00. There was no visible gravel damage, but I had paid for the premium insurance just in case so they weren't too rigorous in checking. (Get that insurance, btw. Gravel seems to be the number one commodity of Iceland!).

The soles of my hiking boots, a pair of Keens I'd purchased at an outfitter in Highlands, NC, about 8 or 9 years ago, were separating from the lasts and kept catching on lava rocks when I hiked. I'd glued them several times before but realized they were done for, so I decided that there can be no better place to say good-bye to a great pair of boots than Iceland. I gave them a sort of Viking funeral and left them in the van when I returned them. The guy at the car rental enjoyed the story and approved of the sentiment as he drove me back to my B&B.

And, bottom line, that's not the only thing I left in Iceland. Its summers are short but glorious. Its scenery is like almost no other place in the world. Its people are polite and welcoming. The Ring Road trip is safe. Finally, I would say this: Iceland is not undiscovered, but it is definitely unspoiled.

I hope you've enjoyed the pictures, and if you ever plan to go to Iceland and drive the Ring Road, maybe this series of posts can serve as a clockwise template.

There's nothing I can say—NOTHING !!—that can prepare you for Jökulsárlón, the glacial iceberg lagoon on the Southeast coast of Iceland. It's about halfway between Höfn to Vik (372 km from Reykjavik, totally doable as a day trip). It's the spot where the giant glacier comes almost down to the sea and calves icebergs which float through the lagoon and out to sea.

This was a day for the ages. One I never will forget as long as I live. Its beauty drained something from me and left me humbled and limp.

The one thing I will say: if you ever go to Iceland, this is an absolute imperative. Full stop.

You'll have to indulge me here. The next post will have more narrative about the rest of the day—which was impressive in itself. But I'm just going to post a ton of pictures here from the glaciers here. Enjoy, and remember: click pics to embiggen a slide show. 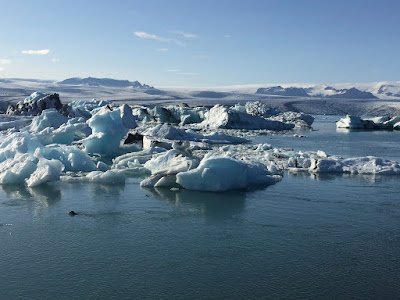 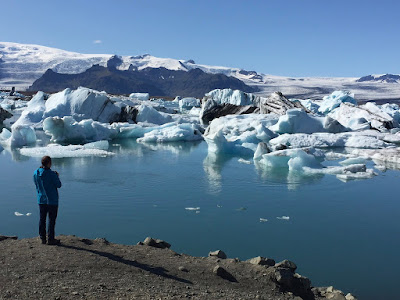 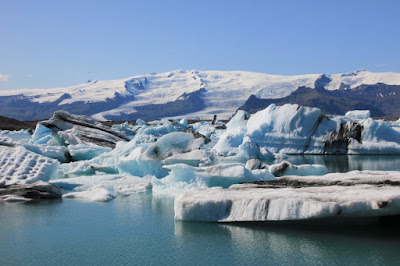 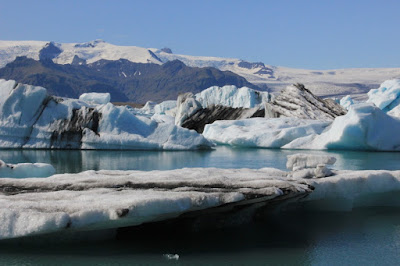 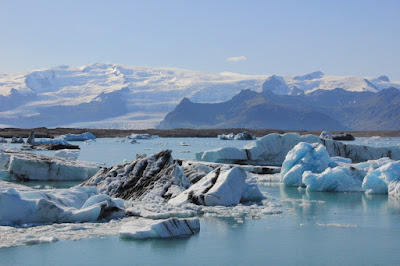 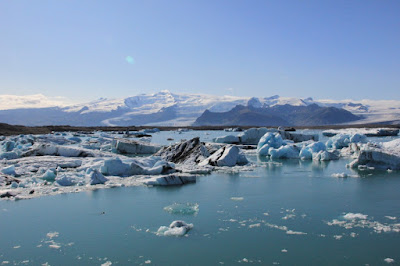 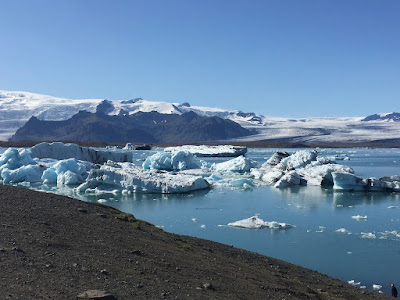 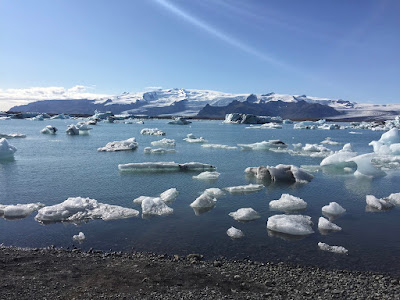 Day 7 was a bit of a sad day. We had to say good-bye to Wisdomie and Wisdil. After a lovely meal of Italian food, we dropped them off at the regional airport at Egilsstaðir. They needed to fly back to Honolulu for the beginning of the semester. When they came to Iceland last year on their honeymoon, they arrived near here by ferry and took the Ring Road south. So this represented a full circle for them. Wisdoc, Wesdom, and I set out from here to complete the circuit for ourselves.

Lake Lagarfljót is a long, deep, ancient lake reminiscent of Loch Ness. And like the latter, it has its own legend: the Lake Lagarfljót worm. Google it. We had a quiet campsite here, quite remote. No shower. No worm.

From here we headed through the East Fjords area down to the quaint seaside town of Höfn. Höfn is situated near the largest glacier on the island Vatnajökull. The weather improved and was beautiful the rest of the way.

En route through the East Fjords, the three of us randomly picked a spot beside the road and decided to hike. The mountains are fairly barren, so if you can see up a hill you can climb until you come to an uncrossable stream or a cliff or a canyon. It's kind of exciting to pick your way around cuts and over mounds. The East Fjords are less compact than those in the west but on a different scale and no less beautiful.

We also stopped at a small village called Djúpivogur where a local artist has installed an exhibition of 34 large granite eggs lining the bay—Merry Bay, it's called. Each egg is differently shaped and represents a different bird that nests in Iceland.