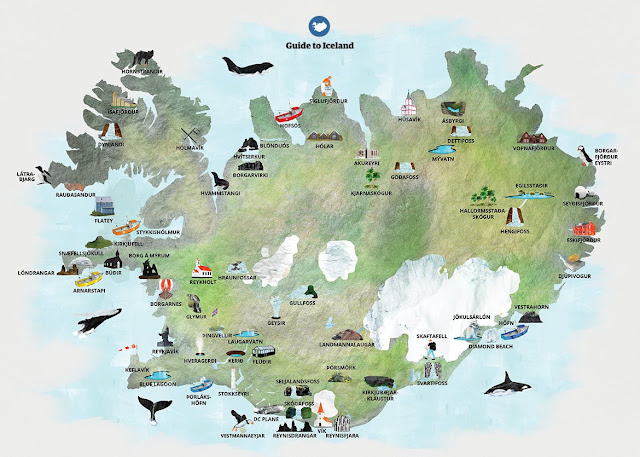 Okay, let's get oriented. If you'll notice on the map above, Reykjavik is in the SouthWest part of the island—roughly the seven o'clock position. (Click it to expand it) The main Ring Road (clockwise) pretty much goes straight north from there and then around the top of the island. At the nine o'clock position, due West, is the Snaefellsnes Peninsula. Arnarstapi is on the southern coast of this peninsula. Most travelers don't go here or the Westfjords—the jutting land mass at the ten o'clock position. It's a bit wilder, not as many inns or restaurants—though they are most assuredly there. We were not to be deterred.

There was a serene beauty about Arnarstapi that charmed my soul. It sits on a promontory of ~200ft cliffs overlooking the North Atlantic Ocean. It is isolated, yes, but people live there year round. And even though it is in the shadow of the Snaefellsjokul—the Snaefells Glacier—they get very little snow in the winter. The west coast benefits from the warming waters of the Atlantic Gulf Stream, plus Arnarstapi is in a bit of a microclimatic snow shadow nestled as it is in the crease of high mountains.

From Arnarstapi we "took the long way" around the tip of the Snaefellsnes Peninsula, traced the fjords on the north shore, rejoined the main part of the island for a few miles, then detoured up into the Westfjords. We found a great campsite in the small town of Reykholar at the base of the Westfjords. The drive was astounding though some of the roads were bumpy and gravelly. "Fjords fjor days" was my tweet. The roads wound around the edge of the mountainsides, went along the inlet fingers of sea, rounded the fjord head, then went back out along the opposite fjord edge. Magnificent. Usually in each fjord, at the head, there would be one settlement—a large farm or a small village.

The campsite in the town of Reykholar is next to the town swimming pool. It is an outdoor pool, and it has great showers. Their swim team competes with other teams around the country, and the manager of the pool can tell you where the best pools are all around the island. You need to know this if you go. Most towns in Iceland have swimming pools. Icelanders love to swim, and one of their chief forms of socializing is sitting around in 'hot pots'. Another thing to know: you can drink the water everywhere in Iceland. It is not treated with flouride or chlorine. It originates either in ancient glaciers or bubbles up through miles of lava filtration. The swimming pools mix surface water with geothermally heated water so you can swim outdoors all year long. But they make you take a shower before you enter their pools. Fair enough.

We swam in Reykholar's 25 meter pool. I did a short 300 meters. It felt amazing and so surprising! Here I was within shouting distance of the Arctic Circle swimming in a naturally heated outdoor pool! Such a feeling! Take your bathing suits when you go. Seriously. Just do it. You'll thank me. We all crammed into the hot tub next to the pool and chatted with a local couple for an hour or so after dinner. Delightful! Also to note: Everyone here speaks English. They begin learning it in like the second grade. And they are proud of their country so they love to tell you about it.