That to Which Lately I Have Been Up

If you find yourself asking "What's Jim H been up to lately?", I'm here to tell you. Deep in the cultural wasteland that is the American South, October has been a surprisingly busy month for me.

Saw the Patriots pretty much dismantle the Falcons on Sunday Night Football.

Saw Clayton Kershaw dominate the Braves. Got a sad.

Saw Philip Glass (sorry, no pics) introduce Paul Schrader's film Mishima: A Life in Four Chapters, for which he composed the soundtrack. Saw it when it first came out in NYC in like 1985 or 1986. Remarkable how much I could recall after, what?, nearly 30 years. Here it is in full:

Attended opening night of the Atlanta Opera's presentation of Puccini's Tosca. Hadn't been to the opera in years. Used to go once or twice a year in NYC.

Spent the day with His Holiness the 14th Dalai Lama—along with another 8000 or so. He's a Distinguished Professor here at Emory University and gets down here every three years. Dude is a rock star. Topic was secular ethics. One panel he presided over included a couple of real heavy hitters: Franz de Waal whose work with Bonobos and chimps has uncovered surprising politics and even empathy and moral feeling among primates. Is doing for moral sentiment what Chomsky did for language—it's hard-wired, not learned. And Richard Davidson who has done research suggesting that infants humans are hard-wired to prefer generosity and helpfulness, and that compassion meditation (a Tibetan Buddhist thing, as opposed to contemplative meditation) produces neurological changes, causes people to extend their circles of friends and intensify the ones they have, and brings about a greater sense of well-being and, in fact, physical health. The Lama is giggly and awfully cute—for a theocrat, nonetheless a benign one. His heart's in the right place, though. 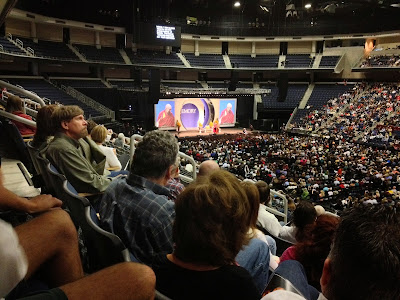 Plus, gratuitous Sasha snaps.
Oh, and thanks, you Bruces, for the Comments to my last post. Much appreciated!

Best agree with Carl Spackler while he's got a pitchfork at your neck.
~