It's been a strange, busy week in water. But, then again, aren't they all? Let's get to it:

First, check these magnificent photos of a jaguar attacking a caiman in Brazil. A taste: 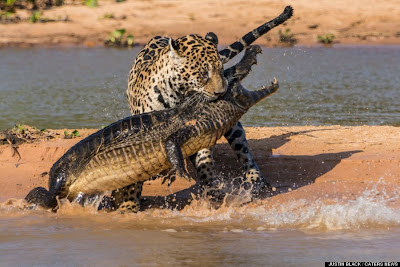 Over Russian objections, New Zealand hopes to create the world's largest fishing-free ocean sanctuary in the pristine waters off Antartica. The U.S. is supportive.

A dam under construction on the Mekong River in Laos threatens the diversity of fish and wildlife.

The recent massive and deadly flooding in Colorado has fueled fears of the spread of mosquitos which transmit inter alia West Nile virus.

Sea bass stocks in the European Union have fallen to 20 year lows and countries such as the U.K. are thinking about imposing quotas on commercial trawling.

Bacteria in three expanding low oxygen zones in the Pacific Ocean off Chile and Peru contribute to the production of nitrogen in the atmosphere. This further weakens the sea's ability to absorb carbon dioxide. (See below)

An eight-state commission that sets water quality standards for the Ohio River is seeking to delay enforcement of new, more stringent mercury standards by up to two years while it considers relaxing those rules.

The oldest living fish in captivity celebrated its 80th year at the Shedd Aquarium in Chicago. Granddad, an Australian lungfish, arrived in Chi-town for the 1933 Chicago World's Fair.

A beach patrol on San Francisco's Ocean Beach discovered a human foot in a running shoe that had washed ashore. No sign of the rest of the body has been found.

Authorities recovered two vehicles from an Oklahoma lake that contained the bodies of five people who may have been missing since possibly the 1950s.

The motion picture documentary Blackfish, about the plight of Orcas in captivity, highlights how insensitive treatment creates a sort of psychosis in these extremely bright and emotionally complex mammals that has resulted in at least four trainer deaths in recent years. I encourage you to see it.

As mentioned above, parts of Colorado in the American west are experiencing 1000-year floods caused by torrential rains. The numbers of dead and displaced are still being tallied. Property damage and destruction is immense.

The Colorado flooding has raised serious concerns about the possible release of toxic chemicals into local rivers from flood-stricken hydraulic fracking operations.

Colorado's richest oil field has similarly been buried in floodwater, and people downstream in places like Nebraska are justifiably worried about contaminated drinking water. No one has any idea whether, where, and, if so, how much any of these wells are leaking. Though 5250 confirmed gallons of oil has spilled into the South Platte River.

The aforementioned torrential Mexican rains show no sign of letting up. Meanwhile, the death toll, currently at 57, is likely to increase.

Texans are squabbling over who owns the rights to the groundwater under their land. The law in this area, as with riparian rights in general, is murky and therefore contentious.

Meanwhile, in a what may be the biggest news of the week, two enormous fresh water aquifers have been discovered in the drought-stricken region of North Kenya. Issues arise, however, about how to deliver and distribute this resource to the rest of the country and continent.

Some believe a new ocean may be forming under the Afar Rift in Ethiopia.

Europeans are attempting to measure and weigh the costs and benefits to improving water quality in the continent's various catchment areas.

More than 233,000 gallons of molasses spilled into Honolulu Harbor from a damaged pipeline owned by Matson Inc. More than 25,000 fish have been killed as a result. Molasses? WTF?

The crippled, capsized Costa Concordia cruise ship was righted during a complicated, 19-hour operation of the coast of Tuscany. Now it can be towed off and scrapped.

Despite reports to the contrary, Arctic sea ice is still at historically low levels.

Researchers at Stanford University have developed a "microbial battery" which produces clean, renewable energy from the bacteria in wastewater. "They hope their technique could be used in wastewater treatment facilities and to break down organic pollutants in the 'dead zones' of oceans and lakes where fertilizer runoff has depleted oxygen, suffocating marine life."

Speaking of wastewater, ever wonder how astronauts use the toilet in zero gravity? Apparently it's a thing.

An icy comet collision billions of years ago might have kickstarted life on Earth by producing molecules that transform into amino acids under the heat of the impact.
Posted by Jim H. at 12:55

TEPCO, the operators of the leaking Fukushima nuclear plant in Japan, dumped more than 1000 tons of contaminated water into the ocean.

Fukushima has the potential to eliminate all the other problems we are concerned with!
~