A few weeks back I ran a 5K race in a small town about an hour's drive east of ATL (first in my age group, thank you very much for asking, a PR even, on a flat course, cool, cloudy day): Madison, Georgia, reputedly one of the only towns spared by Gen. Sherman on his post-Civil War victory torch parade through the South. This, from Wikipedia:

"While many believe that Sherman spared the town because it was too beautiful to burn during his March to The Sea, the truth is that Madison was home to pro-Union Senator Joshua Hill. Hill had ties with General Sherman's brother at West Point, so his sparing the town was more political than appreciation of its beauty."

It's a lovely town, worth a strolling visit if you're ever in the area if you can get past the fact that the wealth that created this—apparently typical—town was created on the backs of persons who were owned like livestock.

(Hover text in places, for those of you who do) 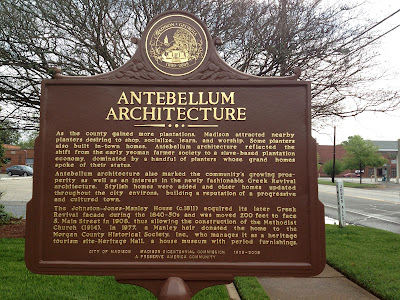 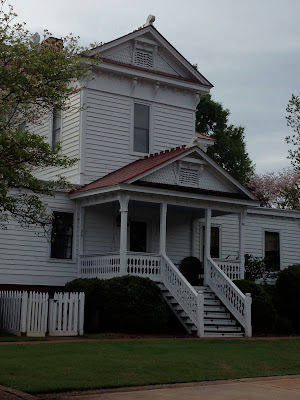 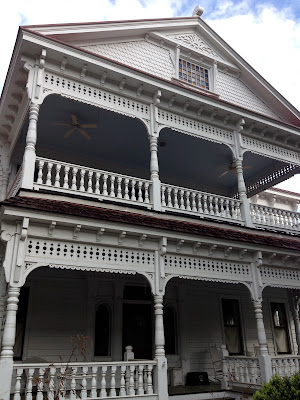 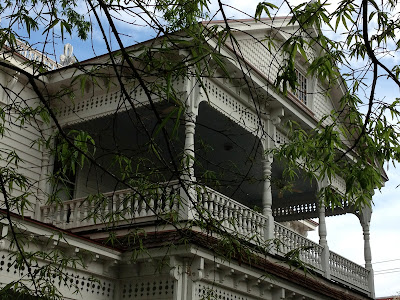 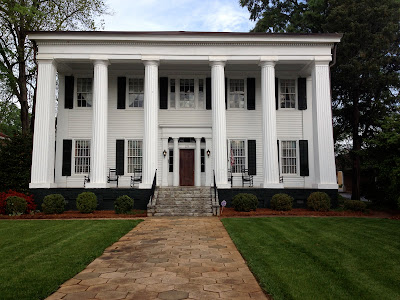 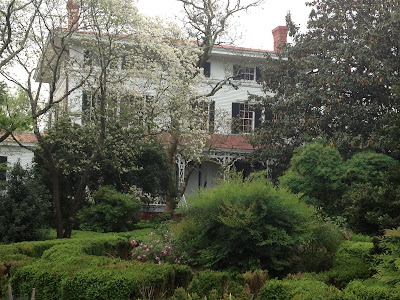 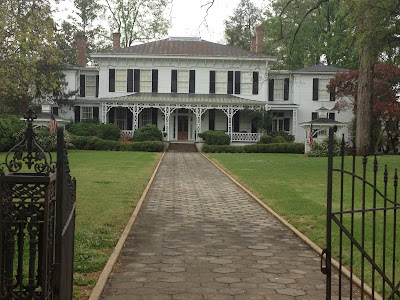 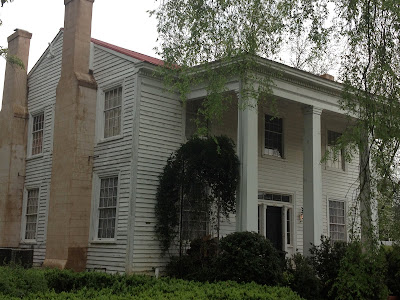 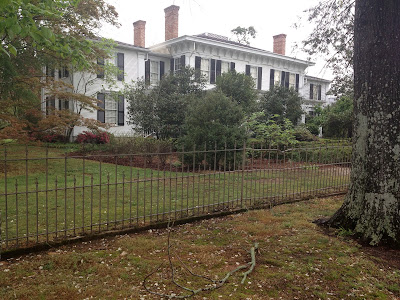 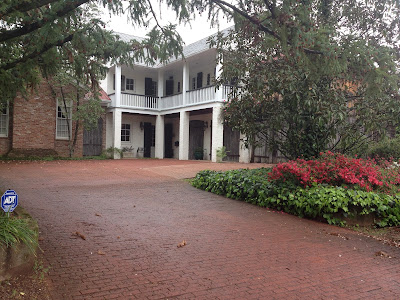 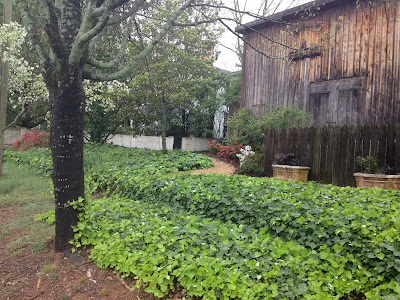 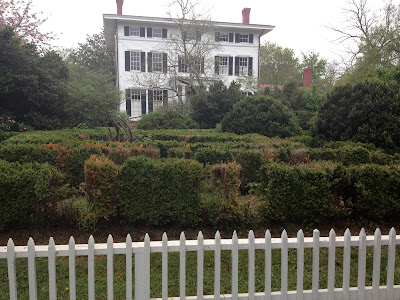 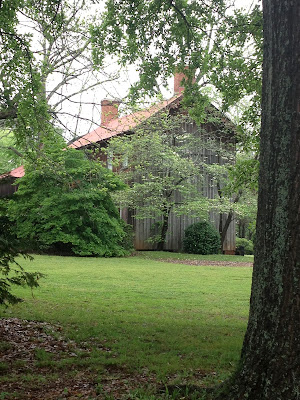 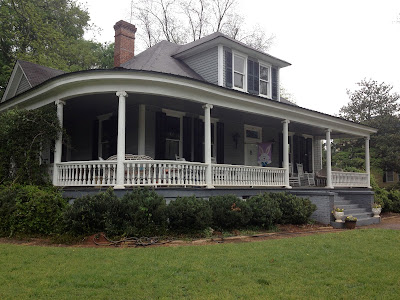 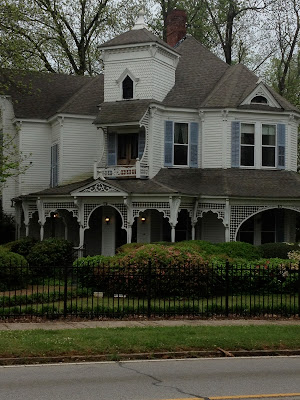 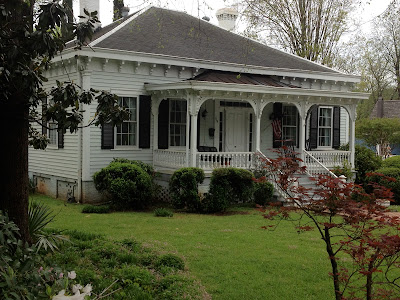 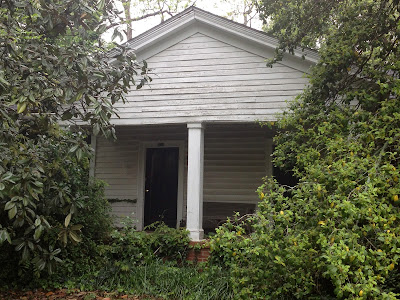 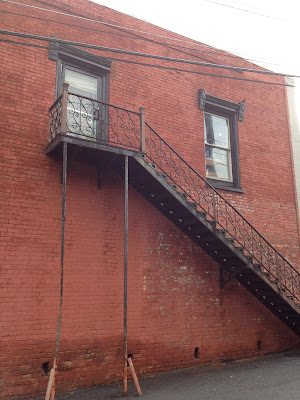 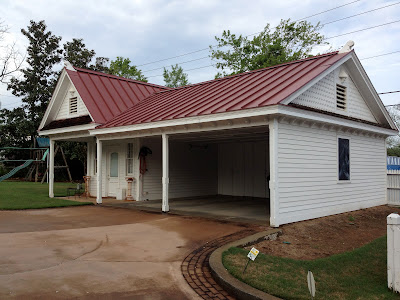 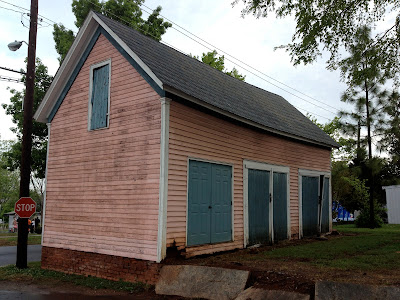 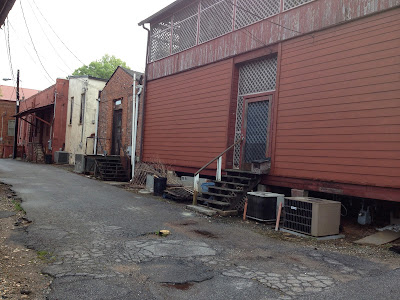 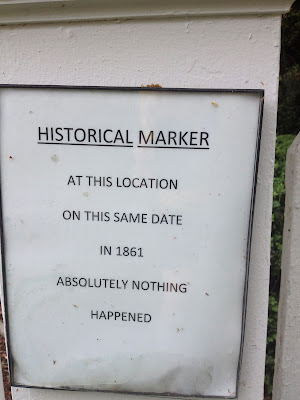 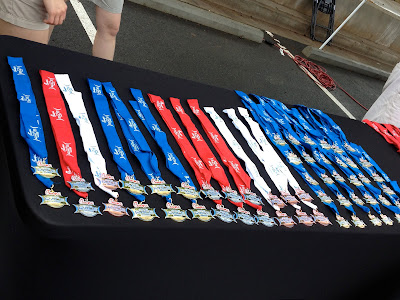 The tin roof might not be authentic, but it is practical.

Bonus points to Madison for the Historical Marker. Told you that I'm exercising vicariously through your exploits, so man, I feel good today.

@if: prolly slaves quarters, so it didn't matter much in those days how much they leaked.

@RG: (1) Denial ain't just a river in Egypt. Or something. (2) No wonder I was huffing and puffing at the end of the race, what with having to carry your ass around the course!

So some friends of mine are moving to Franklin Springs this summer, and I might be roadtripping down there with them. Any places you'd recommend that I check out while I'm down your way?

@the Duchess: M'Lady, Helen, GA 'tis a worthy site if tacky jesusaphanalia and pseudo-Teutonica are your Ladyship's bag. Lakes Burton and Rabun are lovely but pricey, tho' there are Publicke Parklands nigh. Tallulah Gorge est magnifique! A worthy hour's hike down rocky precipices, mostly safe for Thy noble footfall. And waterfalls await. Speaking of same, Amicalola Falls bows to no cascade in its glorious spillage. And from thence, 'tis a mere 5-mile's glorious foliage trail of moderate difficulty to the aptly named Hike Inn. Thine own The Google shall reveal its greater glories. Ruby Falls and the vast cavernages of the Chattanooga area might verily excite thy personage. As might its Aquarium—which is alas a mere shadow, alack, with respect to the magniloquence of the GA Aquarium here in the ATL and, unfortunately, resides within the neighboring much- and truly benighted kingdom of the Tenns. Many, though, would be the peonage's glorious darkthroning opportunities in the thereabouts of Franklin Springs of which more could be said should your Ladyship desire it further. If, however, shopping be the Duchess's ardence, then the fief of Highlands in the higher lands of that Carolina which is North would, I venture to suggest, suffice. She might, if daring, as well, venture into any lowly wooden artifice in the region which advertises itself with a dancing or otherwise delighted porcine personification and from which emits gray smoke of the most pleasing aroma and attempt the local Bar-B-Q victual. The local gruel variously referred to as Brunswick stew, tho' various as its makers, will surely delight her innards as a side dish. Over the summer, there will doubtless offer up many festivals of local craftspersons or dealers in antiquities or lutists and banjists of the bluegrass persuasion or, indeed, purveyors of the aforementioned Bar-B-Q—or all of the above. One might humbly recommend that her Ladyship check one or more of the same out, consulting aforehand the calendrical sections of the aforementioned The Google.

Verily, Good Sir,
I shall take this to heart, should such a long straunge journey commence, as I dig muchlie all such fine things as you have mentioned. Only thrice have I crossed the line of Mason and Dixon, and that was for functions of the family and trips to the capital of our country.

I hope you will not mind further questions to this end should such swankness occur. Also, if my traveling companion is a male of African descent, will that give me trouble in some parts? Such things are not so frowned upon in Fair Clevelandia but it seems could be so elsewhere...

No, no, no, the swankness is all mine. I'd be more than happy to entertain such inquiries.

You know, the racial question is so strange hereabouts. ATL has veritable plethoras of mixed race couples; recall that ATL has the largest concentration of middle and upper class African Americans in the country. North GA is less redneck than South, but certainly whiter than the city; and tonnes of ATL'ers vacay and retire or second-home there. At a typical bluegrass or BBQ festival in the summer, say, it would not be uncommon for the sight of such a couple to go completely unremarked and eyes not even to bat while eyebrows remain unraised. Most people, as far as I can tell, just don't care. Still, there're racist assholes everywhere. That's a subject we could spend hours on. Bottom line: I wouldn't let it worry me.

'Course the best t-shirt I ever saw up there read: "Paddle faster, I think I hear banjo music." (See: "Deliverance" which was filmed not far from where your friends are moving. Kayaking, white water rafting, etc. is pretty awesome thereabouts.)

Will your travels bring you to the city?

Not sure yet... will have to see if the Corolla is road-worthy for one thing, and what their timetable is. If my non-Randal comrade in adventure comes with me, we might head into Atlanta because he has family there. I will definitely keep you posted if this all pans out and my email's reachable via the profile page. Thanks for all your insight!