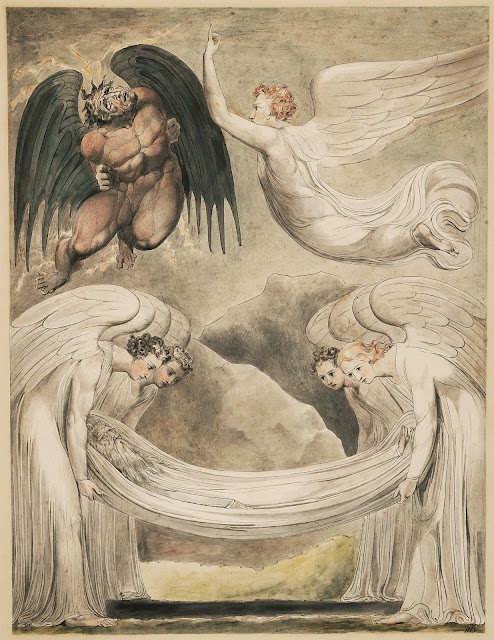 "This is the land I vowed to Abram, Isaac, and Jacob," Yahweh said to him. "'To your seed I will give it,' were my words. It is revealed to your eyes, though your body cannot follow." Moses, servant of Yahweh, died there, in Moab's land, following Yahweh's word. Now he buried him there, in the clay of Moab's land, in a gorge facing Beth-peor: no man has ever seen his grave, to this day. (The Book of J @ 178 (trans. David Rosenberg)

[Moshe was 120 years old when he died, with eyes undimmed and vigor undiminished." (Deuteronomy @ 34:7 CJV]

This passage depicts the death of one of the truly great world-historical (or mytho-historical, or both, depending on your point of view) figures of the ancient Near East. A reluctant, ironic leader, at least three of the world's great religions venerate him as the founder of monotheism—Akhenaten's Great Hymn to the Aten excepted. According to the Bible, he negotiated, organized, and led the great exodus of a loosely knit band of Semitic tribes from Pharoanic slavery and, in exile in the wilderness, forged their identity as a nation in thrall to the great god Yahweh. Shepherd, fabulist, magician, miracle worker, liberator, prophet, law-giver, judge, political leader, murderer, warrior/general: these titles have survived five thousand years attached to this man we know as Moses.

In the passage here, Yahweh leads Moses to the top of Mt. Nebo and shows him the proverbial Promised Land—the lands of the Covenant that Yahweh had promised to the Israelites' racial progenitors, Abram, Isaac, and Jacob, in antiquity. Yet, He tells Moses he may not enter this country. The Book of J does not specify why, but later redactors, editors, and commentators allow it is because Moses disobeyed Yahweh in some petty, self-serving manner. There, looking out over the Jordan River, Moses died alone and unremarked in some anonymous ditch.

Moses, whose eyes were unclouded, could see the Promised Land, and even though he was still active, Yahweh refused to let him enter. A congenital stutterer, Moses had mustered all his persuasive powers to negotiate the liberation of the people and serve as their leader, all in service to Yahweh and in reliance on His promise. He remained true to his calling, even though at times his temper and ego got the better of him, and led the people to the very cusp of Canaan.

It's been said there's nothing worse than to die sad and alone. The sadness Moses must've felt there at the end of his life as he looked out over the Promised Land—allegedly 120 years old—knowing he could not go in; the deep disappointment Moses must've felt when he realized Yahweh had no intention of keeping His promise vis-à-vis Moses despite his lifetime of dedicated service; the overwhelming grief that must've consumed Moses in his loneliness as he tumbled into a gorge and died: this is what I shall call 'The Mosaic Sadness.'

Maybe they all cheated off the same exam?
~

Haven must have felt that against Doomsday in '78.