Ur-story: The Devil In the Details 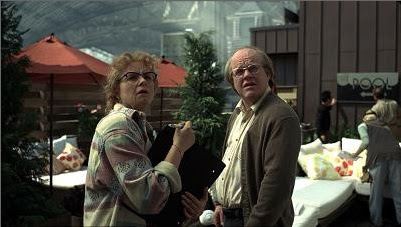 Once again we've gotten ourselves in over our head. Attempting to make a simple structural and thematic comparison of Charlie Kaufman's new film Synecdoche, New York and Tom McCarthy's Remainder, we found ourselves in the midst of yet another theme post, this one dealing with the nature of realism literature and the essence of fictional representation.

Both works kick off from similar meta-fictional premises: a broken man, a knock on the head, an unexpected bounty, an obsession with the re-enactment of their lives. It is in their narrative strategies—dare we say their stories—they differ. Synecdoche, New York is really a conventional story, told with a lot of technical bells and whistles that bring in all sorts of let's call them avant themes of identity, reality, representation, etc. Though colorful, the meta-fictional effects are peripheral to the essence. This, of course, may simply be due to the nature of the medium: film vs. novel. This is not the place to spring that can of worms.

Though complex, Synecdoche, New York is essentially a love story. Structurally it borrows heavily from the Gabriel Garcia Marquez 1980's novel, Love In the TIme of Cholera. Hazel loves Caden though Caden, in all his brokenness, is incapable of requiting her love. Her love for him endures throughout the several-decade length of the movie; it outlasts two marriages for him and one for her; it outlasts five children; it outlasts the putative destruction of the society—though this is never quite clear in the movie.

Caden thinks he loves his first wife, Adele, but she doesn't love him and leaves, taking their four-year-old daughter, Olive, with her. Caden tries to reconnect with Olive, but cannot until she summons him from her deathbed. Caden's second wife, Claire, is a needy but talented actress who needs Caden's guidance to hone her craft; the two have a daughter with whom Caden never really connects. It is implied the daughter is somehow mentally challenged. Claire, too, leaves Caden for another actor and a role in another play.

Hazel runs the box office at the regional theater where Caden opens. She comes on to Caden and they make love sometime after Adele has left him but Caden has unfinished business and cannot reciprocate. She goes on to have a family of her own and eventually become his personal assistant on the massive theater project that occupies Caden for the last third of the movie. They are close but never close enough for her. They make love a grand total of twice over the course of their lives—once when they are young and once just before she dies. They never know the happiness they could have had together. (see supra Cholera)

It is a powerful story of Caden's long and ultimately unfulfilling relationships with women (which happens to be the emotional core of my unpublished novel, EULOGY, as well, if anyone cares). He watches his daughter die; they are unreconciled. He has an epiphany at the funeral of his mother. He adopts the identity of a cleaning woman (Adele's, it turns out). He turns over the direction of his play and his life to another woman, Millicent, who, likewise, ultimately abandons him. And ends (perhaps dies) resting his head on the shoulder of a stranger, an unnamed woman, who plays an extra in his play.

Meanwhile Caden and Hazel and a whole crowd of actors engage in a years-long, post-modern, impromptu theater event re-enacting moments of his life. Identities mix and mash and mesh, actors play actors playing actors, etc. We are left to puzzle and muse over the nature of identity and representation—though ultimately to no real effect. The emotional oomph of the movie comes clearly from Caden's interactions and relationships with the many women of his life. Of course, this left us with one crucial question that, apparently, Charlie Kaufman didn't address: Why does Caden never have an Olive double in his play? Was this an oversight on the part of the writer/director—a writerly gap? Or are we to assume the relationship was too real, too close, too painful to re-enact? If I had Charlie Kaufman here, this is the one question I'd like to have him answer.

Remainder, by contrast, is anything but conventional. The protagonist's obsession with re-enacting moments of his life begins with an episode at a friend's party when two girls ask him if he is looking for something:

"'Yes,' I said. 'I'm looking for a ... for a thing.' [N.B.: Not sure how much more clearly a writer can state his intentions.] I made a kind of twiddling motion with my fingers, a gesture somewhere between opening a bottle with a corkscrew and using a pair of scissors. Then I left the kitchen again.

I was heading down the hallway back towards the main room when I noticed a small room set off the circuit I'd been following up to now. I'd moved round the kitchen each time in a clockwise direction, and round the main room in an anti-clockwise one, door-sofa-window-door. With the short, narrow corridor between the two rooms, my circuit had the pattern of an eight. [N.B.: Remember this!] This extra room seemed to have just popped up beside it like the half had in my Settlement: offset, an extra. I stuck my head inside. It was a bathroom. I stepped in and locked the door behind me. Then it happened: the event that, the accident aside, was the most significant of my whole life.

It happened like this. I was standing in the bathroom with the door locked behind me. I'd used the toilet and was washing my hands in the sink, looking away from the mirror above it—because I don't like mirrors generally—at this crack that ran down the wall. David Simpson, or perhaps the last owner, had stripped the walls, so there was only plaster on them, plus some daubs of different types of paint where David had been experimenting to see how the room would look in various colours. I was standing by the sink looking at this crack in the plaster when I had a sudden sense of deja vu.

The sense of deja vu was very strong. I'd been in a space like this before, a place just like this, looking at the crack, a crack that had jutted and meandered in the same way as the one beside the mirror. There'd been that same crack, and a bathtub also, and a window directly above the taps just like there was in this room—only the window had been slightly bigger and the taps older, different. Out of the window there'd been roofs with cats on them. Red roofs, black cats. It had been high up, much higher than I was now: the fifth or sixth or maybe even seventh floor of an old tenement-style building, a large block. People had been packed into the building: neighbours beneath me and around me and on the floor above. The smell of liver cooking in a pan had been wafting to me from the floor below—the sound too, the spit and sizzle.

I remembered all this very clearly. ...

I remembered it all, but I couldn't remember where I'd been in this place, this flat, this bathroom. Or when. At first I thought I was remembering a flat in Paris. ... No: it wasn't Paris. I searched back further in my past, right back to when I'd been a child. No use. I couldn't place this memory at all.

And yet it was growing, minute by minute as I stood there in the bathroom, this remembered building, spreading outwards from the crack. ...

Most of all I remembered this: that inside this remembered building, in the room and on the staircase, in the lobby and the large courtyard between it and the building facing with the red roofs with black cats on them—that in these spaces, all my movements had been fluent and unforced. Not awkward, acquired, second-hand, but natural. Opening my fridge's door, lighting a cigarette, even lifting a carrot to my mouth: these gestures had been seamless, perfect. I'd merged with them, run through them and let them run through me until there'd been no space between us. They'd been real; I'd been real—been without first understanding how to try to be: cut out the detour. I remembered this with all the force of an epiphany, a revelation.

Right then I knew exactly what I wanted to do with my money. I wanted to reconstruct that space and enter it so that I could feel real again. I wanted to; I had to; I would."

Again, no clearer statement of the nature of fiction is needed.

Unlike Synecdoche the recapitulation of an elusive memory is central to the protagonist's story in Remainder. The protagonist remembers specific sensations—the sound of a pianist practicing, making mistakes, pausing, repeating measures over and over till he gets them right; the smell of liver cooking in a pan on the floor below; the sound and feel of his shoes on marble steps; the feel of his hand on iron banisters and the sensation as his shirt brushes against the woodwork in his apartment; the sensation of moving through space; the vista of red roofs with black cats; and again, the taste of a (hated) carrot. We are in; it doesn't matter whether we like this guy or hate him, whether we identify with him or don't. The writer has put us in his space. We experience his sensations and thus we "get" his attitude. We understand his motivations because we see things through his eyes. It is, McCarthy implies, crucial to the art and purpose of fiction.

This is what we at WoW keep referring to as 'writing in close.' Joseph O'Neill doesn't do it. Junot Diaz doesn't do it. Peter Carey doesn't do it. They tell good stories, but not great ones. Tolstoy in The Death of Ivan Ilich is learning to do it—and it's painful. Joyce does it marvelously. Bellow does it. Per Petterson does it. Nabokov, Fowles, Connell, Banville, Lasdun all do it to one degree or another. James Salter does it as well as anyone. Beckett, Burroughs, Barthelme (to a lesser extent), Sorrentino, DeLillo, Pynchon, and Gass do it to magnificent, significant effect.

The great ones use all the senses. They tell the story of a particular person at a particular place and time in specific detail. Leaving off these sensuous details renders the fiction abstract. It doesn't draw us in.

At this point we're saying nothing about the metafictional aspects of McCarthy's work (or even that last crew of controversials either; if you read the examples at the link here you'll see what we mean). We're only getting at what we take to be the heart of the heart of fiction—whether meta- or no—and that is the details. (more to follow)
Posted by Jim H. at 21:04