Looks like it's gonna' get heavy up in here:

Meanwhile, on the counter-revolutionary front, according to Bloomberg News (that radical leftist rag) it seems the fact that the Koch brothers (whose PR/Marketing wing is otherwise known as the Tea Party) have been running an anti-patriotic, corrupt, criminal enterprise for some time now is coming to light. Who would have guessed? 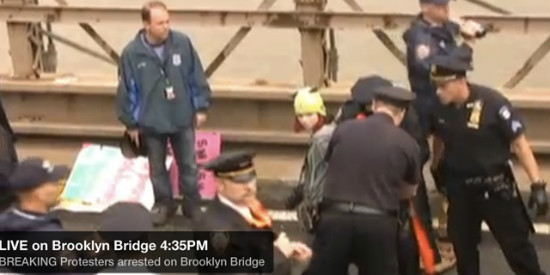 So, for contrast: 700 mostly poor, young peaceful protestors were arrested and thrown in jail over the weekend for exercising their Constitutional rights to assemble and speak freely on the Brooklyn Bridge because they broke some minor city ordinances, but the phenomenally wealthy, senescent owners/operators of a vast international corrupt criminal conspiracy get to continue to lobby the U.S. Congress with impunity and maintain their social and political prominence without legal consequence?

Jeez, does this mean we have to choose a new Hitler? In his stead, I nominate the Brooklyn Bridge SA thugs. No, not the cops, silly rabbit.

Re: the Bloomberg expose of the Koch Brothers. When it eventually comes out that the reason the NYPD under Bloomberg and Ray Kelly have police stationed in 11 foreign countries is that that force is an international industrial espionage ring being paid for by New Yorkers for the primary purpose of enriching Bloomberg and his cronies and was instrumental in Bloomberg's personal fortune rising during his first two mayoral terms from $4 billion to over $16 billion, I guess we'll have to say something along the order of It Takes One To know One.