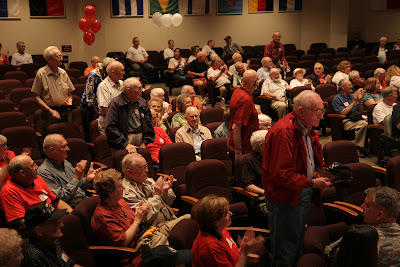 My father is 86 years old. He walks a couple miles every morning and can nearly shoot his age on the golf course. That's him in the picture, with my mother, sitting, applauding just behind the fellow standing foregrounded in the red jacket.

On September 18, 2010, Wisdaughter and I drove up to Winston-Salem, NC, to honor his service in World War II. The local Rotary Club has been sponsoring "Flights of Honor" to send WWII veterans to Washington, DC, to view the WWII Memorial. My father was on the flight that day.

There were over 100 cute little old men (and a few women) tottering around the airport. It was hard to imagine that they were 18-21 at one time and unselfishly left their provincial North Carolina homes to fight for their country and their ideal of freedom for the rest of the world.

My father served on the U.S.S. Cepheus, an Andromeda Class attack cargo ship, with the U.S. Coast Guard. He participated in the invasion of Southern France and the assault on Okinawa. He came under attack by kamikazes and made port in Kure, Japan, just after THE bomb. We have pictures.

He is a modest man, always has been. Only recently has he spoken to us about his service to his country. He was, by his account, one of the most popular men on board because he was the mailman and unofficial chaplain. 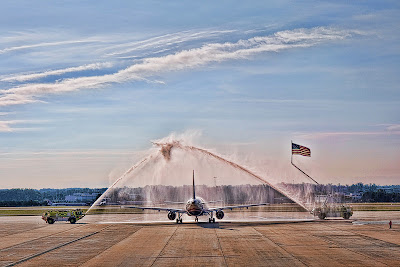 That generation is dying off—some estimate at the rate of about 3,000 service members per day. I am proud to have been able to honor my father for something he did long before I was born. I am glad he survived the hell of war—else I would not have been born. I am thankful the Nazis didn't prevail.

Email ThisBlogThis!Share to TwitterShare to FacebookShare to Pinterest
Labels: Flight of Honor