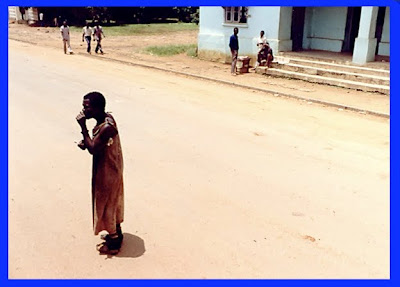 I post this image in response to a comment by Frances Madeson on this previous post. This haunting image of a manacled person with schizophrenia in Beni, Democratic Republic of Congo (formerly Zaire) entered into this story.

If you don't read BDR's blog, BLCKDGRD, every day, you're missing something, whether it's politics, local news and sports, literature, music, poetry, or out-and-out or merely-tongue-in-cheek curmudgeonry. He misses little. For example, in this post, he refers to my previous post about Congo and Nicholas Kristof's important op-ed piece in Sunday's New York Times in the same sentence. The more attention brought to this seeming intractable humanitarian crisis the better.

BDR's clearly paying attention and has proven himself a true blegfriend over and over again. Frankly, I don't see how he finds the time to do what he does without getting paid.

Over the weekend, there was a little get-together of about 600 people in Nashville, Tenn. You may have heard about it; they called themselves a tea party. Personally, I'm not sure why such a minuscule gathering garnered so much press and publicity and commentary in the media and around the blogosphere. You'd've thought it was a million-man march or a multi-city, multi-million person protest against the plan to invade Iraq (which didn't get anywhere near as much press). Even though I watched it on C-Span, I was planning to ignore Sarah Palin's closing keynote address. It was shallow. It lacked any sort of logic or reasoning. It was all ATTITUDE. But here's the thing: Andrew Sullivan, a former conservative Republican, heard the same speech and, as his ear is experientially attuned to the dog-whistles of the right wing, came away with a very different appreciation here and here. As he says, it was pure sophistry (something I wrote about recently here in my two "Feck" posts). Yet:

It was the most electrifying speech I have heard from a leader of the GOP since Reagan.

She can electrify a crowd. She has the kind of charisma that appeals to the sub-rational. and she has crafted a Peronist identity - utterly fraudulent, of course - that is political dynamite in a recession with populism roiling everyone and everything. She is Coughlin with boobs - except with a foreign policy agenda to expand Israel and unite with it in a war against Islam.

Do not under-estimate the appeal of a beautiful, big breasted, divinely chosen warrior-mother as a military leader in a global religious war.

I cannot vouch for his conclusion, but it does give me pause.
Posted by Jim H. at 22:56

Thanks much for the plug.

Jim,
I hope what I’m about to say has no impact on your future publishability (larf, as Steven says) but I want you to know that I think that Hartley in Beni is a brave story and an important story but most of all fecund like its jungle milieu. How many seeds of inquiry did you manage to plant? How many opportunities for reflection in the stillness? The rain fell, Jim. The rain absolutely fell.