How Stupid Are Texans? 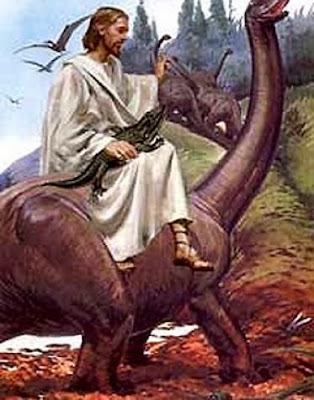 Yo, it doesn't take much for me to throw this pic up. If you fish around you'll find it posted here at least twice. (Look for the 'Jesus Dinosaur' label in the side bar on the right.)

Why do I put it up again? According to a recent poll conducted by the University of Texas/Texas Tribune:

Three in ten Texas voters agree with that statement that humans lived at the same time as dinosaurs; 41 percent disagree, and 30 percent don't know.

So, let's get this straight: Three out of every five Texas VOTERS either believe that human beings coexisted with all the dinosaurs or simply don't know any better. That's how stupid Texans are. And lest we forget: they produced two of the last three U.S. presidents. Sarah Palin believes it too. You can read about their "science" on Conservapedia. The stupidity is breath-taking.

This comes on the heels of Sunday's article by Russell Shorto in the New York Times Magazine about how the christers have captured the Texas State school board and want to control what goes in their text books: How Christian Were the Founders, noting how the text book decisions of the Texas school board have a profound influence on the book purchases by the other, smaller states' boards.

Seriously, someone needs to mess with Texas! They are leading us back toward the Dark Ages. Maybe they should be allowed to secede.
Posted by Jim H. at 22:22