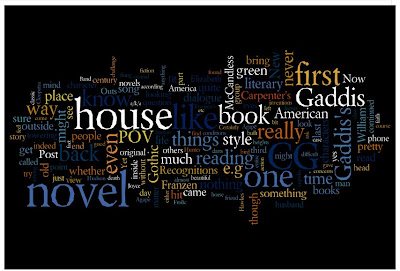 William Gaddis's Carpenter's Gothic is told from a consistent, though unobvious and, to me, unusual, and objective—dare I say realistic—point of view: that of the house with the quirky architectural style which stages all the book's direct action and dialogue. This is not a necessary conclusion to an understanding of the book, but it certainly provides a satisfactory description of the POV. As the central character, Elizabeth Booth, says in the passage quoted in the previous post: "it's a hard house to hide in." Everyone is seen from the outside. No one is presented sympathetically, though our sensibilities are naturally drawn to Elizabeth Booth by virtue of her time on stage. She is in nearly every scene.

Only a few characters actually make an appearance at/in the house: Paul Booth, McCandless, and Billy Voracker are the primary ones. Madame Socrate, the Haitian maid, and Lester, a CIA agent and former colleague of McCandless, also turn up, along with a few minor spear carriers such as a grocery delivery boy, McCandless's first wife, a reporter, an anonymous FBI agent, some vulgar neighborhood boys playing in the streets, and a man constantly clearing leaves.

As with the house, Gaddis's characters are "built to be seen from outside it was, that was the style." Franzen's squalid preacher and senator are actually seen at one remove: through the fragmented perspectives of the characters on stage, none of which, in itself, is entirely reliable, but all of which become, in the end, illuminative.

The authorial play on the word 'style' here—call it dramatic irony or post-modern self-referentiality—upsets some readers; they don't need the book to tell them what it's doing or to reflect on its own methods. And, if you want, you can refuse this reading. But, I have to say, this reading helps to understand Gaddis's view of humanity. In this regard, McCandless's speech (quoted in the previous post) is a bit of a manifesto. "[A] patchwork of conceits, borrowings, deceptions, the inside's a hodgepodge of good intentions:" this is an apt description of Elizabeth and McCandless and even Paul and Billy.

Much has been made of Gaddis's style, focusing primarily on his use of language and dialogue. Reading a Gaddis novel, particularly CG, is a lot like reading a play or a screenplay: there are a few scene-setting descriptions (often quite beautiful and always meaningfully crafted) and then pages of dialogue with a few stage directions thrown in for emphasis and clarification. As I said before, these techniques can be quite off-putting to the novel reader grown accustomed to her standard prose development. It is a challenge, but by no means an insurmountable one.

First off, Gaddis doesn't use quotation marks to set off speech. This is nothing new. Joyce does the same thing. So does Beckett. The reader has to determine where the speech stops and the stage directions begin. No big deal once you get used to it.

Much of Gaddis's dialogue is unattributed—though there are more tags or i.d.'s ('he said', 'she reached for a glass', etc.) here than, say, in JR. Characters speak, and the reader has to discern from the context who is speaking and to whom, especially at the beginning of a chapter or after a transition in time. Once you get to know them—their tics and vocabulary—they are easy to spot.

There are no conversational predicates (such as, e.g., "'Hi, John!' John Thompson, a tall, blond Nordic type, was still best friends with Mary even though they'd had a vivid affair in college. 'Hi, Mary,' he said. Mary hid the blush of passion, the embers of which she could not suppress after all these years, with a slight smile and a chaste, affectionate hug.") Sometimes a character will be identified only by the clink of a bottle on the edge of a glass (Paul), a stammer (Elizabeth), a cigarette paper (McCandless), a toilet (Billy), etc.. Fortunately, CG has a small cast of characters, and rarely are there more than two characters on stage at a time. Sometimes you have to read a few lines before you realize someone is conversing on the telephone to someone else while there's another character in the room with them. However, if you're paying attention, the writer always clarifies the context. Gaddis never leaves you hanging. And, in this respect, CG is more accessible than either Recognitions or JR (this, in itself, upset yet another group of readers and critics). Though, it demands you pay attention. You can't skip pages or paragraphs the way you can in 'easier' novels.

Another unsettling aspect of Gaddis's style, to some, is his use of interruptions and disruptions. Just as the reader seems to be getting the point or the drift of a conversation, something intervenes. The character gets distracted, loses her train of thought, starts off another tangent, trips or stumbles, sees something in the distance. A phone rings, someone knocks at the door, a tea kettle whistles, a tree limb rustles against the window, television or radio dialogue blends into the chatter, another character interrupts, etc. The reader has to sort things out at the same time as she is trying to make sense of whatever it is that the character is trying to say. Gaddis never lets you get comfortable.

Gaddis's characters don't speak in good, Jane Austen English. They use run-on sentences and poor grammar. They speak, much as we all do with long-time friends and family, in code words or as though they are continuing a long-running conversation into which the reader has only recently tapped. They break things off then resume them later—if they resume them at all. The reader has the sensation of eavesdropping on an on-going drama, not all of which seems relevant or pertinent. Yet, the codes are ultimately decipherable, the private languages penetrable.

Another discombulating technique Gaddis uses is to gives the reader only one side of a telephone conversation. Having to figure out what the person on the other end of the line is saying solely from the reaction of the person on stage is a fun sort of exercise. Like a crossword puzzle or a Sudoku or a jigsaw puzzle, there are plenty of clues and cross-reference points to help you put it together—but you have to work at it.

Unattributed dialogue, fragmentary speeches, grammatical glitches, one-sided conversations. The reader has to work through these. It can be frustrating because it takes a bit of mental effort. But it can be done, and, in fact, once one gets the hang of it, the reading picks up. Yet, as with the notorious impenetrable first chapter of Vladimir Nabokov's Ada, you just have to keep reading. Eventually things will be made clear.

Gaddis sprinkles a trail of breadcrumbs throughout the book; data, facts, bits of information, news, opaque references, obscure details, and even opinion and spin come at you relentlessly. If you aren't paying close attention, you'll miss something important. Though, it is safe to say Gaddis repeats the important stuff for emphasis. That is not to say he develops character and story in traditional or familiar ways (e.g., the rule of three). He doesn't.

At first, CG, like his other early novels in particular, feels like word soup. Or a "word cloud" [fyi: the image above is a word cloud of the current front page of this blog [ex-this post] created by me at Wordle). Yet, nothing, in the end, is really wasted—though, at the time you read it, it doesn't quite make sense or fit into a recognizable pattern. In this respect, Gaddis is an efficient writer, a beautiful writer. He manages to tie everything together at the end. And this may be the most frustrating part: the real exposition (the telling) takes place at the end.

I like that your reader is female. Nice choice.

Also, the dialogue structure you've described reminds me of Saramago, whose cadence I enjoy. It has a sense of winding, lyrical urgency. From your excerpts, Gladdis' writing seems to have that sense of urgency as well - but more staccato than Saramago's.

I love books (The Mystery Guest) and movies (Back to the Future, Holes - YAY for high brow allusions*ha!*) that find a way to incorporate by their end what you think while reading or watching are spare parts, incidental mentions.

The BBC's review of Back the The Future asserts "nobody says anything that doesn't become important to the plot later."

Though Gladdis' writing I'm sure is exponentially more involved.