This is a continuation of the thoughts from my previous post.

First, I'd like to thank the folks who commented for their considered responses. (BDR didn't leave a forwarding url, but you can check out his site here)

Second, as much as I care about my loved ones and the condition of their ignorance, I know they have similar feelings: they are probably deep in prayer for the condition of my soul even as I write this. That's the nature of family—or at least ours: agree to disagree, but not disagreeably; which is not a bad way to be after all. I'm sure they believe I'm "lost", though they don't condemn me. They just want for me what they think is best, and by that I think they mean 'most comforting'. What I want for them, apparently, is to remove the consolations of their religion. Is that wrong? Is that bad?

Why should I insist that people confront reality? Of what real value is truth?

What if their way works for them? It firmly ensconces them in a vital tradition. It expresses an authentic, deeply human emotion—that of awe and reverence and a sense of powerlessness in the face of something that is greater than themselves (Step 2, if you're counting). It establishes for them a sense of community with other like-minded believers. It provides structure and, dare I say it, meaning in their lives. It has helped several of them reform and renew their own lives—saved them, if you will, from their own sinful nature (religionists, in general, are often desperately afraid of the evil they know themselves to be capable of). It has provided them with an answer to the age-old question "what is it to live a good life?" It has inculcated (mostly) positive values in them: e.g., self-sacrifice or -abnegation for the sake of one's family and friends and community (i.e., agápē) is the epitome of what it means to be human, in fact, it is as close as we can get to being divine.

In the microanalysis, I suppose, this isn't a bad thing. That's my quandary.

I've always been cursed with the ability to see both sides of an issue. That's made me a pretty good lawyer—if you can make your adversary's case better than they can (without straw men and shouting and other rhetorical distractions), then you know how best to make your own strongest case and, as well, confront your own weaknesses. But, in other instances, it renders me ineffectual, paralyzed by my own philosophical bent, alienated from my own passions. I would never be a good pundit (or book reviewer), because, for me (unlike so many others), thoughtfulness and reflection necessarily precedes taking a position or forming an opinion.

But enough about me.

Why should I throw cold water on all the warm fuzzies their religion provides them? That's not a question I can answer directly.

Here's what I believe. Religions attempt to supply solutions to the deepest mysteries of life. Their answers are figurative in nature. Taken too literally, they are misleading at best. The forms, the rituals, the texts, the authoritative figures, the hierarchies, etc, (all of which, by the way, are reflections of the cultures out of which they emerge)—that is to say, the means of communicating the answers—lose their metaphorical or mythic significance and become ends in themselves. And the religionists lose sight of the original questions.

I don't pretend to have pat answers to these questions. And that's the difference between me and most (I stress the word 'most') religionists: they claim to have exclusive, proprietary avenues to arrive at solutions to these and like questions. And they're almost always toll lanes!

I do not believe one has to be a religionist, much less a sectarian, to contemplate the nature of existence and life and consciousness and community and tradition and morality and fate and, yes, eternity. No.

The problem I'm having with my loved ones relates directly to the question of consciousness.

Consciousness is indeed something miraculous. The fact that we can perceive the world around us—get a whiff of a stinking iris or bask in the warmth of a spring sun or savor a crisp, ripe cantaloupe or marvel at the artistry of Glenn Gould as he plays (and hums) the magnificent Bach or witness the deep, star-peppered darkness of a moonless night—is truly miraculous. That we are aware of ourselves processing these sensations and can respond in interestingly useful and conscious ways to them is an unfathomable complexity. "So I've got that going for me. Which is nice."

Certainly, it is important to question the validity of what we become conscious of. Descartes taught us to doubt perception, but never to doubt that we ARE. Indeed, we might be dreaming all we perceive, or there might be some evil homunculus in our pineal glands tickling the receptors in our brains and trying to trick us into false beliefs with all manner of elaborate fake sensations. Sure, we should ask those questions. But, to the extent there are consistencies and coherence in our picture of the world as it is given to us (our consciousness of it), it makes sense to conclude we are not being intentionally deceived (there is, e.g., no elaborate trickster god trying our faith by making things appear older than the 6,000 years they really are; no Matrix). What doesn't make sense is to relapse back into the dream state of belief—to take the blue pill. Because it is a gift, we have an obligation to consciousness.

So, the issue for me is how to deal with it. These people are my loved ones. My family. Yet, their obstinacy and ignorance in the face of scientific reality disturbs me. And I know theirs is not the end of it. It is pervasive—and not only in our society. Consciousness raising is costly, time-consuming, and often quite painful, especially when dealing with closed, convinced minds. Perhaps futile. If, by being insistent, I am doomed to fail and even alienate them, what is the nature of my obligation to them? To me?

There is a prior question: How sure am I of the rightness of my position? This is the kind of question most religionists—and all absolutists—either fail or are incapable of asking, much less answering. Yet it is a theological question. 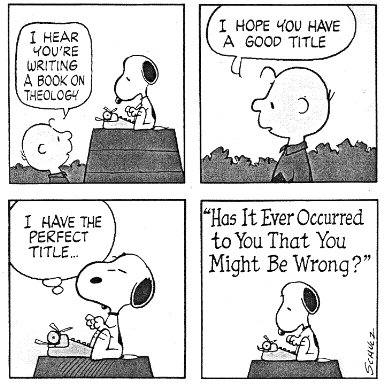 Could I be wrong? And if I am wrong, what consequences? Most religionists have the missionary zeal, the evangelical fervor, the certainty (however deluded it might be). I don't.

Or, perhaps that just means I'm not the Buddha or even a Bodhisattva. Or Neo. Or, for that matter, even Carl Spackler with his pitchfork and pitch-perfect delivery. Just a blogger.

From time immemorial rumour has it or better still the notion is abroad that there exists a way out. ... (17-18)

So on infinitely until towards the unthinkable end if this notion is maintained a last body of all by feeble fits and starts is searching still. There is nothing at first sight to distinguish him from the others dead still where they stand or sit in abandonment beyond recall. ... (60)

So much roughly speaking for the last state of the cylinder and of this little people of searchers one first of whom if a man in some unthinkable past for the first time bowed his head if this notion is maintained." Samuel Beckett, The Lost Ones (62-63)

Dear Jim, This isn't a comment but a response to a comment you left on The Reading Experience. Part of "let me tell you" appeared in Golden Handcuffs Review and may be read online. The book you can get from amazon.co.uk or the publisher. Thanks for your interest, p

God help me, I also want to reference The Reading Experience. Because I think Daniel does such an excellent job on overcoming ignorance through principled reasoning, apt examples, lucidity, at times ardor, mostly not though, brevity, and most importantly, repetition. He makes the same points from every which way so if you read him consistently, over time, the light does finally dawn. Also, he will occasionally concede the odd point, which is not only gentlemanly and right, but exemplary. Too often people won't and that's what really renders a debate futile-feeling. On rare occasions, always a fun moment for this reader, he even reverses a previously held position and that, too, besides being charming, shows the way.

Good god, Frances Madperson, you really call yourself a writing coach? What lunatic told you you're capable of writing yourself? Or do you teach by exemplifying the wrong ways to write?

I don't know, Jim. There's a whiff of self-congratulation about these posts. (The difference between you and them is you're more thoughtful?) But beyond that, I think you're making certain assumptions that are clouding the issue. You keeping referring to "most" "religionists" (horrible word, that), for one. You write:

"I don't pretend to have pat answers to these questions. And that's the difference between me and most (I stress the word 'most') religionists: they claim to have exclusive, proprietary avenues to arrive at solutions to these and like questions."

Do they? What evidence do you have for this claim? I'd argue that most adherents to a given religion do not make such claims, or rather they do not rely on such claims, they are of little real importance. If pressed, they may make such claims, but that's not the same thing.

Look, the vast majority of people are no doubt ignorant of a great deal. You argue that your loved ones are ignorant of so much because of the influence of their religion. And no doubt their religious views are indeed the proximite cause of their ignorance. But then you go on to talk about how the religion helped save them from whatever. What is it people are afraid of? Why do the certainties offered by the fundamentalist sects have appeal for people?

I understand the problem you have. Most of my family is Republican and they believe all manner of inane things about American history, recent and otherwise (an ignorance which, frankly, is vastly more significant and widespread in this country). Talking to them about it is infuriating--I get very upset, which is not productive and makes me seem like the crank--so I generally don't. Many of these relatives, post-9/11, have gravitated to more religiously inspired ignorance, though some of them are still essentially areligious, but the ignorance is still the same.

My point is that the kind of ignorance of which you speak is not fundamentally a function of religion, though religion can and does supply the content of that ignorance. Why are my relatives so ignorant? What roles do school, history, capitalism, advertizing, mass media, etc, play in their ignorance? And so on... What are the material conditions that have enabled the rise of religious fundamentalisms?