I've been tracking this for years here @ WoW: the cost of photovoltaic solar energy is nearly on par with that of mainstream utilities. Here's why. First, the price of solar panels has plummeted.


"Since 2009, the cost has dropped 70 percent," says Pearce. But more than that, the assumptions used in previous studies have not given solar an even break.

"Historically, when comparing the economics of solar and conventional energy, people have been very conservative," says Pearce. To figure out the true cost of photovoltaic energy, analysts need to consider several variables, including the cost to install and maintain the system, finance charges, how long it lasts, and how much electricity it generates.

Pearce and his colleagues performed an exhaustive review of the previous studies and concluded that the values given those variables were out of whack. For example, most analyses assume that the productivity of solar panels will drop at an annual rate of 1 percent or more, a huge overestimation, according to Pearce.

"If you buy a top-of-the-line solar panel, it's much less, between 0.1 and 0.2 percent." In addition, "The price of solar equipment has been dropping, so you'd think that the older papers would have higher cost estimates," Pearce says. "That's not necessarily the case."

Stated another way, we're not talking about any abstract "price discovery" here, even though a truly free market economics would demand it:


The price of solar energy-generated electricity, calculated by a legitimate levelized cost of energy (LCOE) method, is now competitive in many regions with the price of electricity generated by conventional sources.

To be clear, this review of solar photovoltaic LCOE is not one of those “if coal and nuclear paid for the real harm they do” analyses. It is a hard look at the actual numbers.

And what's more, apparently the financial data are bearing this out:


Renewable energy is surpassing fossil fuels for the first time in new power-plant investments, shaking off setbacks from the financial crisis…. 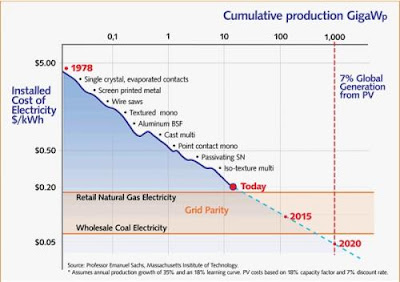 This from those DFHs over at the Bloomberg.

This is important. Lower priced energy correlates with higher productivity and, often, a higher standard of living—especially if the energy is not monopolized and Corporate is not skimming the profits created by increasingly higher productivity the way they have been over the last twenty years (h/t Occupy!). Think, for example, of cheap, portable desalination of water. Such a technology could stave off at least one future resource war, not to mention save the lives of peoples everywhere. And solar is not the only natural, renewable, abundant source of energy.

Though I do my level best to avoid them, metaphors abound. (h/t blogbud BDR, from whom I'm always stealing turns of phrase.)

Big Picture: Occupy! is not just about the U.S. middle class.

Big (down-the-road) Problem: How do we handle the additional heat thrown off by all this increased energy without cooking the planet?

How do we handle the additional heat thrown off by all this increased energy without cooking the planet?