The BIG news this week has to do with Groundwater Crises around the world: The World is running out of water!

Let's focus on that:

According to satellite data compiled by NASA, more than half of the world's 37 largest aquifers are losing water. That is to say, they are being depleted faster than they are being replenished. Population and climate stresses are frontline causes for the planet's water tables to be dropping so precipitously. 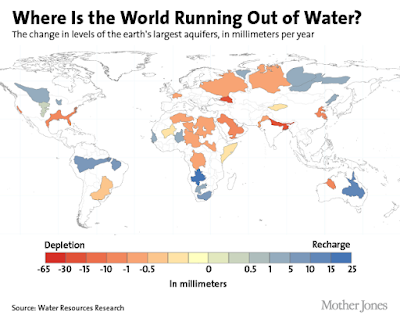 Border wells are seen to be drying up in the Juarez Valley, Mexico, and the historic California drought is beginning to kill the ancient Redwoods.

Where does all this aquifer water go? Scientists have, for the first time, traced water from several aquifers and determined that it is not being used sustainably.

The Guardian has a terrific and important article mapping world-wide access to clean water and sanitation. According to longitudinal data from the WHO and UNICEF, not everyone has clean water and indoor sanitation. Cholera, diarrhea, dysentery, hepatitis A, and typhoid result.

The U.S. Environmental Protection Agency has announced new rules clarifying the types of water bodies the federal government can protect from pollution. Or, as The Hill spins it, "President Obama Asserts Power Over Small Waterways." And, right on cue, conservative-led States have filed suit to prevent the Federal government from stripping them of their jurisdiction over waterways and riverine systems that happen to pass through  or lie within their boundaries. So far, Texas, Mississippi, Louisiana, Kansas, Georgia, Alabama, Florida, Kentucky, South Carolina, Utah, Wisconsin, Ohio, and West Virginia are challenging these standards.
Posted by Jim H. at 11:48

Sadly, those people aren't the ones with all the power. I find it hard to be optimistic, Jim H.
~