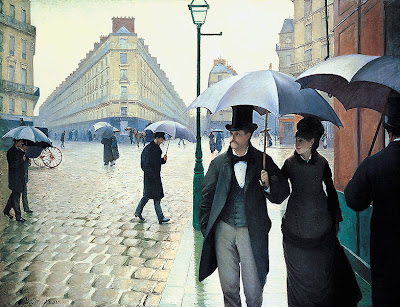 I'm leaving this week for a six-city European trip avec famille. I've purchased a small journal exclusively for keeping a log of my travels. Over lunch last week, I mentioned this to a friend and sometime commenter here, Sandi. I said I was thinking about keeping it as an exercise "in character"; that is to say, as if a potential novel character were keeping the journal. Method writing, if you will. Brilliantly, she suggested I think about using a female protagonist. It sounds like a great exercise, at a minimum, for fictioneering.

What motivation, oh brainstorming blog-friends, might such character have for visiting Amsterdam, Köln, Heidelberg, Paris, Edinburgh, & Londinium? [par example: BDR (1, 2, 3, 4, 5, 6, 7, 8, & Done) blogged his recent vacay using his blog-voice. With pictures. Randal frequently lets his persona frolic about Clevelandia with a camera as well.]

My flâneur should be just that:

As a member of the crowd that populates the streets, the flâneur participates physically in the text that he observes while performing a transient and aloof autonomy with a "cool but curious eye" that studies the constantly changing spectacle that parades before him (Rignall 112). As an observer, the flâneur exists as both "active and intellectual" (Burton 1). As a literary device, one may understand him as a narrator who is fluent in the hieroglyphic vocabulary of visual culture. When he assumes the form of narrator, he plays both protagonist and audience--like a commentator who stands outside of the action, of whom only the reader is aware, "float[ing] freely in the present tense."

Walter Benjamin posits in his description of the flâneur that "Empathy is the nature of the intoxication to which the flâneur abandons himself in the crowd. He ... enjoys the incomparable privilege of being himself and someone else as he sees fit. Like a roving soul in search of a body, he enters another person whenever he wishes." (Baudelaire 55). (Mellencamp 60).

Let your imaginations roam and let the suggestions roll in.

Le Flâneur (music by The XX) from Luke Shepard on Vimeo.

Email ThisBlogThis!Share to TwitterShare to FacebookShare to Pinterest
Labels: Flâneur

Whatever & wherever you decide to stroll, that's a fantastically wonderful idea.

I travel vicariously through others, heh, so I'll try to come up with swanky suggestions, but I'm hoping they pile in from those who've seen first hand, adding potential character to whatever your pen turns out.

That's a tough task and perhaps a distraction from your travels with...

I'd only suggest you be yourself in the moment and edit later.

The goats and girls thrive; you should as well.