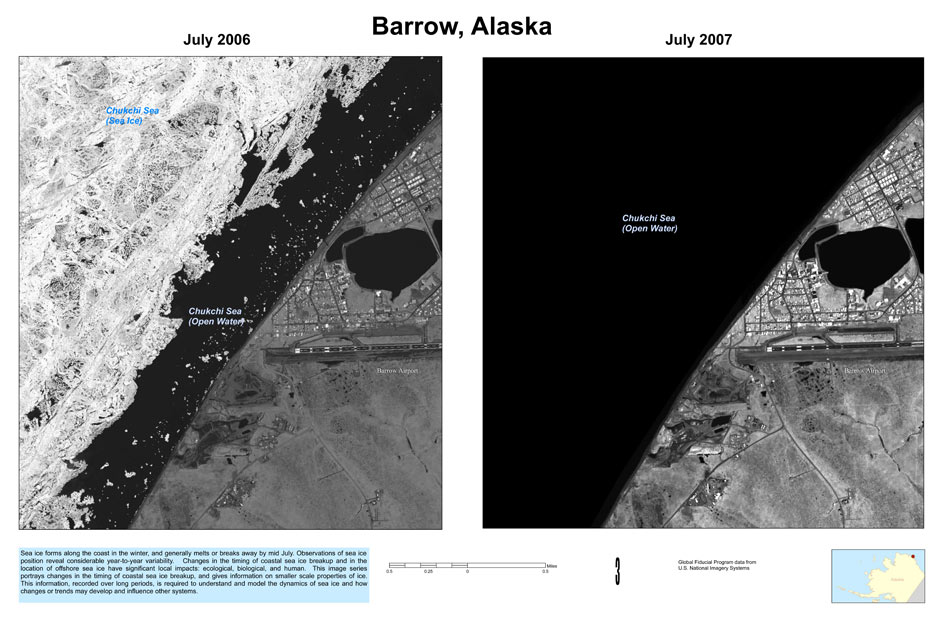 The disparagement of science—true science, objective knowledge—is, generally, a function of ignorance or stupidity. The muzzling of scientific facts is a power play. But when a group of moronic thugs hide information that is crucial to the well-being of the planet and all living things out of self-interest or the short-term financial interest of their constituents in a particular industry, that's pretty much criminal.

Apparently, the George W. Bush/Dick Cheney administration hid "[g]raphic images that reveal the devastating impact of global warming in the Arctic ... taken by spy satellites over the past decade, [which]confirm that in recent years vast areas in high latitudes have lost their ice cover in summer months. The pictures, kept secret by Washington during the presidency of George W Bush, were declassified by the White House last week."

The avowed antipathy of the Bush/Cheney regime to anything smacking of environmental concern and global warming grew out of their favoritism to the entrenched interests of their constituents in the oil industry. To hide such direct evidence of the "devastating impact of global warming" is a vicious, misanthropic act. In the face of such clear and compelling evidence, to argue publicly against the "devastating impact of global warming" is nothing short of a crime, a fraud.

And why must the revelation of such misfeasance (suppressing it) and malfeasance (lying about it) on this scale be relegated to a foreign newspaper? Where is the outrage in this country? Besides trying to remediate the global problem, is there nothing that can be done about the devastation these men have wrought through their outright mendacity?
Posted by Jim H. at 21:28

We're all cats on a hot tin roof, Jim. Did I ever tell you I went to the same high school as Tennessee Williams? We had the same locker, or I should say I inherited his. He had inscribed a few choice epigrams inside, scratched on the metal with a key or a penknife, I suppose. Signed only with initials (T for Tom, he wasn't yet Tennessee) but unmistakably him and confirmed by the school administrator. I was surprised because some of the content was overtly political and subversively so. After that encounter whenever I read him, or took in productions of his work, I saw that power relations were the essence of his drama. I took pictures of the text with my Instamatic and have them stashed in my memorabilia. I should probably have them digitized before the images fade, if they haven't already. Remember the revolving flash cube? It all seems so quaint now.

"Where is the outrage in this country?"

In line to buy tickets to see Iron Man II, of course.