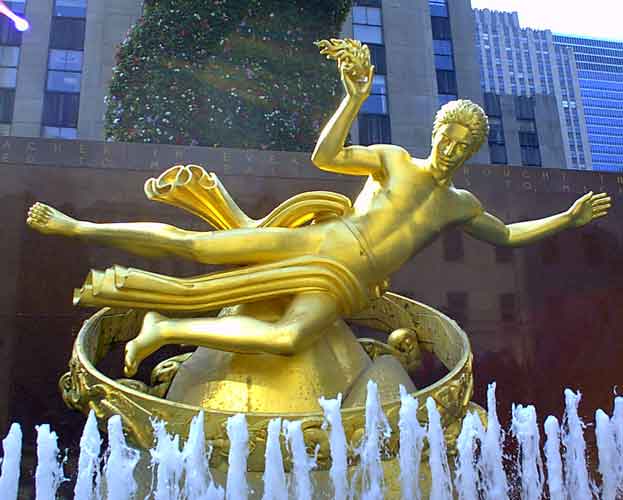 Sorry if my last post ended on a glum note. After writing it, I wondered where that bit of pessimism came from in me.

I had to think, questioning some of my basic assumptions about my expectations for Obama's presidency. If you look back over the last year of posts here on WoW, you'll find a number of feuilletons railing against what I believe to have been war crimes and crimes against humanity committed by the Bush administration. Other, more connected, more important people (including some in Congress) have taken up the mantle. Let's hope they keep at it.

I needed a frame of reference because that sort of came out of nowhere. Now, I'm not necessarily a Jungian or a Joseph Campbellite depth psychologist, but I do believe mythology often supplies us with narratives to help us understand our experience—as, of course, does literature. So, as I've done in the past, I looked to mythology for a template. My likening of McCain/Palin to the Narcissus/Echo myth is Exhibit A. So, thinking in terms of myths, I suppose I wanted Obama to be like Hercules and clean out the Augean stables of the muck and shit left behind by the prior administration.

Lakoff's piece, The Obama Code, threw me off my frame. What Lakoff seems to be saying—and, again, forgive me for using a mythological narrative as an interpretive tool—is that Obama is more like Prometheus; he is trying to bring the fire of moral conscience to society. Let me explain:

Briefly, the familiar story of Prometheus: he was one of the Titans who sided with Zeus against his own kind. In some versions of the story, he was the creator of the human race. He tricked Zeus into accepting animal sacrifices of fat and bones, allowing humanity to eat the meat. He stole fire from the immortals and brought it to the human race. Zeus punished him for this, first by sending Pandora with her box as the first woman, then by having him chained to the Caucasus Mountains where an eagle or vulture came every day and feasted on his liver (which, of course, regenerated every night).

The symbolic act that stands out, of course, is the bringing of fire. In some versions of the story, Prometheus stole it from the sun; in others, from the Olympian gods themselves who had been hiding it from humanity. In Aeschylus's Prometheus Bound, he also is claimed to have rescued humanity from destruction and taught them the arts of civilization. For this act of defiance against the gods and for his choosing to side with humanity against the gods, Zeus exiled him, imprisoned him, and subjected him to eternal torture.

My pessimism, I think, stemmed from this myth. The learning is that consciousness-raising is invariably a painful psychological upheaval. That's at the individual level. But, in the social arena there's a parallel: The elite, the status quo, the powers-that-be (=the gods) cannot abide the lower classes (=mere mortals) having the same privileges (=fire) they enjoy. When one of their own—preferably a newbie—effects such a betrayal by enlightening those they consider their lessers, they will surely try to bring him down.

This is what Obama, if I read Lakoff aright, has done.

The mantra of the religionist reformer has always been that you have to change the inner person before you can effect behavioral and, indeed, societal change. That is the aim of 'conversion'. But we live in a secular society and politicians are not priests.

From 20th Century analytic philosophy, we glean that understanding the way the mind works can only truly come about through understanding the way language works: again, the model of consciousness. Changing the rhetoric of politics would represent, then, on this model, an attempt to reform politics, in specific, and society, in general.

What Obama is attempting to do, according to Lakoff's Obama Code, is inculcate a moral conscience in the consciousness of the nation: social responsibility and accountability. The resistance to this has been fierce among certain groups already, principally those who cannot see beyond their own noses: that is, those for whom there is no greater and no other morality or accountability than that of the individual. To make people aware of their own collective responsibility is a Promethean transgression akin to stealing fire from the gods and bringing it to humanity. And it is sufficient to invite their everlasting animosity.

There is some reason for hope, however; again, hewing close to the interpretive power of the myth: Prometheus was eventually rescued from his torture and exile by...drumroll please...Hercules! So, on our interpretation, it may, indeed, take a cleaning out of the Augean stables—prosecuting the Bush administration for its crimes and cleaning out the Constitutional muck they left behind—to save Obama from their wrath.