One of the most frequent questions you hear when you attend a Q & A session after a reading by a novelist goes something like this: "What was your creative process in writing this novel?" Here's mine for my just-completed manuscript of what I'm calling AUTO-DA-FÉ.

AUTO-DA-FÉ is the story of an aimless Southern boy who seeks to find his life's meaning with an extremist militia group intent on fomenting a revolution at the turn of the 21st Century.You might describe it as a sort of anti-Forest Gump.

I knew from the start how I wanted to end the novel and had a working title that captured the aim. And I knew I wanted to depict the underground origins and rise to the mainstream of what we now call the alt-right. To do so, I had to analyze both my protagonist's motivations and the history of these right-wing groups and then dramatize them. I had a timeline of historical facts and a psychological profile. Themes emerged and coalesced. Plots formulated. Chapters flowed.

To account for the increasingly shortening attention spans of today's social media drenched audience, I chose to write short sections—2-5 pages—within reasonably short chapters for the most part. This helped with both dramatization and concision of thought and expression.

I belong to a group of committed writers who listen to and comment on each other's works in progress. At some point about a quarter way through the drafting process, I started bringing earlier sections to the group. This provided me a structure for recursively editing previous portions of the book to maintain consistency with the directions I found the narrative taking.

This last point is important. It means that the completed draft I have now is much more advanced than a first draft. 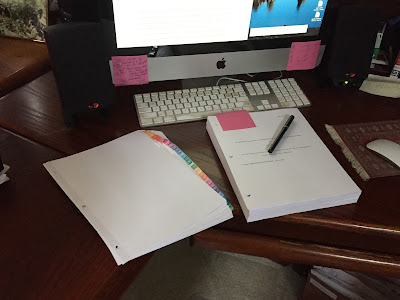 Above is a picture of the manuscript I just printed out. Note that it is on three-hole punch paper. Note also the section dividers; there's one for each chapter.

Here are the basic facts of the manuscript:

I've inserted the typescript into a locking D-ring binder. My plan is to read the novel straight through, cover to cover, just as I would any other novel. I do this for continuity's sake. 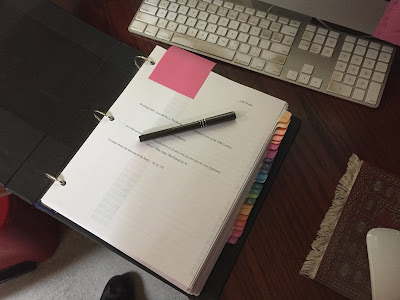 Up to this point, I've been drafting, editing, and revising successive chapters on my computer one at a time. This next step is to ensure the entire book is consistent and non-repetitive. To follow the narrative through-line. To gauge the pacing. To assess the structural/emotional feel of the whole.

As I go along I will make my changes on paper with my trusty Sanford Uni-Ball Deluxe Micro (pictured above). Then later, when I've finished, giving the manuscript one last going over, I will input the changes I've made onto the (stripped down, no bells and whistles) MicroSoft Word for Mac (Version 15) computer file. Lastly, I will run a SpellCheck. At that point, perhaps by mid-summer, my book will be ready for submission.