In case you were worried, I'm away from the office for a few days. Somewhat regular blograming will resume in mid-August. Mahalo.
Posted by Jim H. at 14:19 2 comments: Links to this post

ATL Mélange: The Morel of the Story

[As with all pics hereabouts, click to embiggen, scroll over for additional commentary]

Driving by this BBQ place, had to snap a pic or two:

When I saw this sign, I knew I had to obey:

Pigs notwithstanding, BBQ was adequate. My dining companion:

After four straight nights of near-torrential rain and scary cloud-to-ground lightning, I present: The fungus among us, or Amanita jump a little lighter: 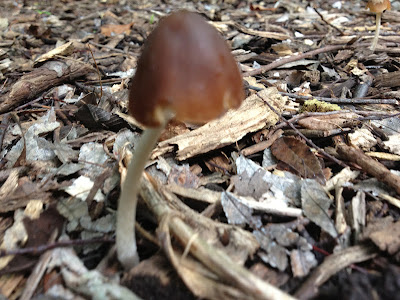 These, of course, after this previously posted stinker:

We had a serious scare over the weekend. Lily, our miniature dachshund, got out of her dog yard. I believe the termite inspector failed to close the gate properly. One of our fellow dog walkers spotted her roaming around the neighborhood and shooed her toward home. While she was out, apparently she got into some rat poisoning. This was Wednesday.

Her initial symptoms, late Friday, were similar to dehydration: low energy, hang dog look, skin ridges, etc. For the first day we treated her for that—at 2:30 a.m. Sunday, I even went to the 24/7 drug store for some Pedialyte. But she hadn't improved by morning so, on Sunday at 9:00 a.m., we took her to a 24/7 Vet. Her x-rays showed fluid in the pericardial and pleural sacs; she was bleeding into the chambers around her heart and lungs. They sent us immediately to an emergency Vet hospital across town.

Rat poison is essentially Coumadin, the blood thinner they give stroke patients—except in massive doses given the body weight of rodents. Unfortunately, Lily only weighs about 7-8 pounds, so she's not much bigger than the Norwegian wharf rats we used to see down in the NYC subways.

The Vets gave her a transfusion of plasma to stop the bleeding and reintroduce clotting. Then they gave her the antidote, Vitamin K. It was touch and go for a day and a half. She had some neurological twitches and lapses of attention, so the docs thought she was having a brain bleed. We went to visit her at what must have been the low point Sunday evening thinking this might be the last time we would see her, and she absolutely rallied when she heard my voice and started looking around the room to find me. The twitching stopped, and she was able to focus on my face as I moved across her field of vision. It was the turning point.

We got to bring her home Tuesday. She's about 85% normal now, still coughing slightly when she gets excited. But that's all part of the resorbtion process. She had blood and fluid in her lungs—pneumonia-like—and has to get rid of it slowly the way dogs do. Dogs have amazing recuperative powers. A human being in as bad shape as Lily would probably be in the hospital for weeks.

So, our gal is restored to us. Wisdoc was distraught and practically sleepless Sunday. Wisdaughter, who returns today from her study abroad, was in tears at Sacre Coeur when we told her and only relieved when we Skyped late Tuesday with Lily in my lap. Wisdomie, who's now living on Waikiki, has been in constant touch by phone. And Wesdom has been right there with her the whole way. It's amazing how emotionally attached we are to that foolish, little creature. The human-pet bond is not negligible. And it goes both directions. 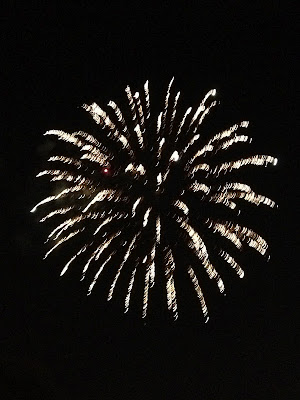 A Perhaps Religious Moment in an Otherwise Cynical Time

Scientists at CERN using the Large Hadron Collider announced they have discovered the traces of a new particle consistent with the elusive Higgs boson. Some have described it as the "molasses" that holds the universe together at a level so infinitesimally small we can scarcely conceive it.

What is the Higgs boson? In 1993, a British minister of science offered a prize for the best lay explanation which was won by David Miller of University College London. In essence, a Higgs field accounts for why things have mass.

I believe we have no real understanding how big (and I use the term advisedly) this discovery—if, in fact, it is replicated and confirmed—is and what it means for let's call it the "human project". For example, the discovery of the electron ca. 1897 by J.J. Thomson paved the way for all the electronic conveniences we enjoy today, including that computer or smart phone you're using now. I'm not sure any fin de siècle 'bloggers' or their equivalents could have predicted we, 115 years later, would be walking around with a device that could, at the same time, connect us with just about anyone on the planet, videochat with anyone anywhere, take sharp and accurate color pictures instantly, carry around enough music to listen to continuously for up to a week non-stop, access more information than was contained in all the libraries of the world at the time, upload information to a satellite in geosynchronous orbit around the earth, etc., etc. All in a device that fits in a man's trouser pocket.

It's very exciting to be living in this day and age. But, it's worth remembering that we are only just dipping our toes in the water in terms of understanding the world we miraculously inhabit and somehow have come to perceive.

In the span of a few short years, we've seen images of a deep field of space which capture light from the state of the universe over 13 billion light years ago, near the time of the creation of all time and space as we know them.


And now our instruments have detected evidence of the basic stuff of matter.

An agnostic person, but one who holds out the possibility of some entity so much greater than we can possibly conceive, might say we humans could be on the verge of experiencing the first real inkling of the immensity of something truly worthy of being called deity, one that doesn't rely on mystification and primitive myth and hierarchy to make us experience abject awe at the magnificence of the world we find ourselves in. Frankly, for me, it raises what I consider to be the true religious question, first raised in the song of the Biblical Psalmist: What is man, that Thou art mindful of him? and his children, that Thou payest them any heed?

That is to say, what is our place, the place of humanity—nay, of life itself—in this unfathomable vastness?


Andy Taylor w/ The Darlings (aka The Dillards)